10 of the best dance films 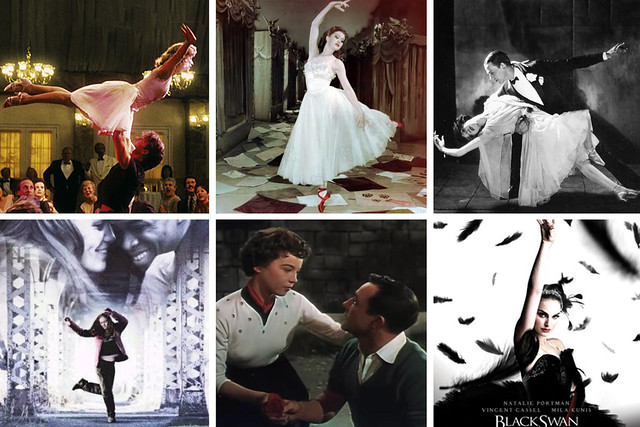 Dirty Dancing, The Red Shoes, Fred Astaire, Save the Last Dance, An American in Paris and The Black Swan © Wikipedia

Friedrich Nietzsche wisely noted that, 'We should consider every day lost on which we have not danced at least once'. Indeed Nietzsche would surely agree that the following dance films should be viewed by all fans of dancing, at least once.

We’ve listed ten of the greatest, stretching back to the roots of the genre with the electric duo Ginger Rodgers and Fred Astaire, to films that feature iconic choreographers of the last century and the composers whose unforgettable music ensure these films last well into the next.

Let us know if we missed your favourite by commenting below or tweet us @royaloperahouse.

Based loosely on the Hans Christian Andersen fairy tale of the same name, young ballerina Vicky is dangerously torn between love and her desire to dance. The 15-minute sequence known as the 'Ballet of the Red Shoes' used a corps de ballet of 53 dancers. The Red Shoes is one of the highest earning British films of all time.

‘I've got this fire in my body. I'm just there. Flyin' like a bird. Like electricity,’ says Billy in his audition for The Royal Ballet School. Raised in Country Durham during the collapse of the mining industry, Billy loves to dance.

From the makers of Four Weddings and a Funeral and Notting Hill, this British tale about raw talent is said to be inspired by Royal Ballet dancer Philip Mosley. Read an interview with Philip about the true story behind the film.

Julia Stiles is the classically trained ballet dancer who moves to Chicago after a family tragedy to discover hip-hop and love in her new neighbourhood. She also falls in love with a handsome, soon-to-be doctor played by Sean Patrick Thomas. The film went on to earn over $140 million worldwide and its stars were awarded the 'Best Kiss' at the 2001 MTV Movie Awards.

American war veteran Jerry (played by Gene Kelly) is trying to make it as a painter in post-war Paris. Though he is taken under the wing of an influential heiress, he really loves Lise, a beautiful French girl played by Leslie Caron.

Set to the unforgettable music of the Gershwin brothers, the final 17-minute dance sequence took a month to film – and cost $500,000.

Artistic Associate of The Royal Ballet Christopher Wheeldon recently won over Broadway with his stage adaptation of the film. His production makes its West End debut in 2017.

Center Stage follows a year in the life of 12 very different dancers, including a young Zoë Saldana, studying at the American Ballet Academy.

Will ballerina Jodie win a place at the prestigious New York City Ballet? Or will she opt to join rebellious choreographer Nielson Cooper to start a contemporary dance company?

Darren Aronofsky won Best Film at the 2011 Oscars and Natalie Portman was crowned Best Actress for her performance as ballerina Nina Sayers, who becomes consumed by duplicitous roles in Tchaikovsky’s classic Swan Lake.

Jennifer Grey has the ‘time of her life’ when she falls in love with instructor Patrick Swayze and discovers dance. The 80’s cult classic features a stellar soundtrack and that unforgettable line, ‘Nobody puts Baby in the corner’. Replicate that lift with caution.

David O’Russell’s film based on the novel by Matthew Quick celebrates the reformative and healing power of dancing, featuring an all-star cast including Bradley Cooper, Jennifer Lawrence and Robert De Niro.

After breaking into a dance academy, rebel Tyler Gage, played by Channing Tatum, is forced to take part in community service. He soon falls for a ballet student (a role performed by Tatum's real-life future wife Jenna Dewan) winning her over with his hip-hop dancing. The film created an avalanche of Step Up fans and four sequels since it was released ten years ago.

Iconic Romeo and Juliet adaptation West Side Story won an astonishing ten Academy Awards upon its release. The musical was conceived, directed and choreographed by Jerome Robbins, who is often hailed as the greatest American choreographer of the 20th century. Robbins had a huge influence on the creation of American Ballet Theatre and New York City Ballet and his work is often performed by The Royal Ballet.

Jazz and classical ballet collide again in what became the seventh of 10 collaborations between iconic dance partners Fred Astaire and Ginger Rogers.

Choreographer George Balanchine is featured in the classic, his satirical ballet ‘Slaughter on Tenth Avenue’ appears at the close of the film. The Royal Ballet perform his work Jewels in April 2017.

Which is your favourite dance film?
Let us know in the comments below.

You can see more ballet on the silver screen at a cinema near you, with live relays from The Royal Ballet. Tickets are on sale now.

This article has 34 comments