Behind the Scenes: Spring Season trailer 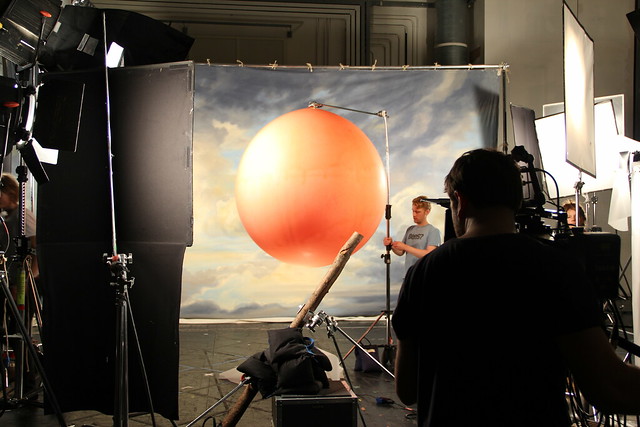 Towards the end of 2012, an in house production team assembled in one of the Royal Opera House's Opera Rehearsal Rooms to film the Spring Season Trailer.

The room, a cavernous space normally reserved for opera sets and principal singers, was instead filled with trolley-loads of lights, power cables and sand bags. The tables of fake food and jewels from rehearsals were pushed to a back corner, the windows blacked out and the space was transformed into a film studio for the day, a temporary home for a camera crew, two Royal Ballet dancers and a Harris Hawk called Rusty.

The trailer, which forms part of the One Extraordinary World campaign, was inspired by the Spring Season image and draws on themes from productions across the forthcoming season, focusing particularly on David McVicar’s production of Die Zauberflöte and Natalia Makarova’s La Bayadère. To re-create elements of the image, a sky backdrop was hung from a raised metal pole and an enormous orange balloon inflated and maneuvered carefully through the opera house to the rehearsal studio.

Harris Hawk Rusty, who is usually employed catching pigeons, took to his work in the studio like a true professional. Bribed by snacks of chicken's feet, he flew repeatedly across the studio so that, filmed by cameras shooting at a high frame rate, the movement of his flight could be captured in detail worthy of a David Attenborough documentary.

“The Harris Hawk represents the Opera Company,” explained director Tom Turner, “not only as a reference to Die Zauberflöte, but also a visual metaphor for the grace and power of the work in the Season.”

With all hands on deck to operate various cameras and lights, anyone with a spare arm was enlisted to hold Rusty as he flew from one side of the studio back to his handler – even those with a slight fear of birds such as myself.

I was coaxed into holding Rusty with assertions that it was a once in a lifetime opportunity. He was certainly well-behaved, perching on my arm, the very model of obedience before flying directly to his handler right on cue. Even so, the threateningly sharp talons and hooked beak were enough to cause a nervous sweat, and I was unable to meet his expressionless, hawk-eyed stare. Similarly, despite his expert performance, watching him calmly disembowel a dead baby chick after a hard day’s work did little to endear him to me.

Dancers Letitia Stock and Elsa Godard also had to combat their unease of dancing in unison on a small podium. Despite being filmed just before a performance of Swan Lake, they repeated the sequence multiple times so that the cameras could capture the intricacies of their movement.

“The hawk’s flight leads you to the ballet dancers, who are both from the corps de ballet to emphasize the level of strength and talent that goes through the whole company,” said director Tom.

The choreography used in the trailer is from La Bayadère’s most frequently performed dance Kingdom of the Shades, a mesmerizing dream-like sequence in which the entire corps de ballet dance in unison. “This is a very ephemeral and fleeting dance, and so I chose this particular section to highlight the meticulous timing and physical strength demanded by the choreography,” said Tom.

“The trailer embodies the beauty and art in both the opera and ballet,” explained Tom. “It is meant to show the subjects at close quarters, revealing details in texture and movement to highlight the level of precision that goes into every performance night after night.”

This article has been categorised Off stage and tagged behind the scenes, One Extraordinary World, out-takes, spring season