Behind the scenes: One Extraordinary World season guide cover

A look at what inspired the striking cover image featuring both Minotaur and White Swan. 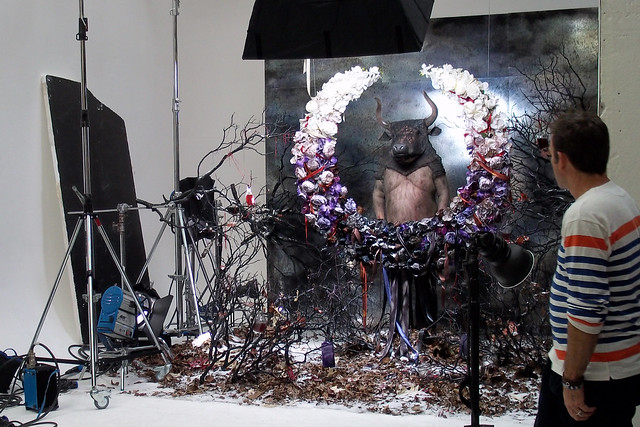 A tangle of blackened branches scattered with coloured bottles and a wreath of roses and ribbons; the hulking silhouette of the Minotaur and the graceful White Swan ballerina - the photo adorning the Autumn season guide cover is a powerful and contradictory image.

Drawing on themes from across the forthcoming season, it is designed to create a world where nothing is quite as it seems, encouraging the audience to create their own story.

“The image represents a moment between heaven and hell, love and loss, and darkness and light… a place between reality and fantasy.”

The image plays with traditional interpretations to present a world at once familiar and otherworldly. The White Swan tutu for example, though classical in form, is aligned to contemporary fashion and style. Similarly, the artists, in place of being the main focus of the image, feature as performers within a constructed world.

“By taking reference from themes rather than focusing on specific subject areas, the audience can map their own narrative to the image. We pull people into the image, into the Royal Opera House's world – One Extraordinary World.”

This image is the first of a series that will celebrate the Royal Opera House as a place for story-telling and world-class ballet and opera. Our creative team is currently producing a short promo film to accompany the image, exploring the themes and symbolism in more depth.

One Extraordinary World follows on from the World Stage campaign of previous seasons. You can watch a playlist of our World Stage films on our YouTube Channel.

This article has been categorised Off stage and tagged 2012/13, Anthony Dowell, Autumn, behind the scenes, Production, Season guide, Stephen Langridge, Swan Lake, The Minotaur