Behind the Scenes at rehearsals for Agon

Royal Ballet Masterclasses offer an insight into the rehearsal process 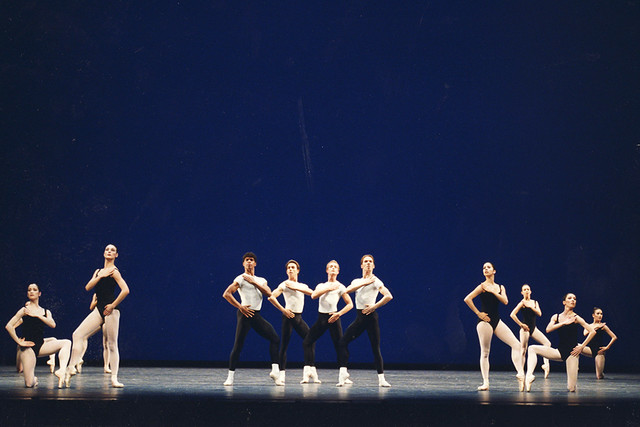 The Royal Ballet’s Masterclasses raise the curtain on the rehearsal process, allowing you to see ‘behind-the-scenes’ action. The dancers rehearse a work under the guidance of their teacher, to the accompaniment of a pianist, and before the audience’s very eyes – so that everything has a ‘fly on the wall’ feel.

Even Monica Mason was present at the ‘Agon’ Masterclass on Thursday 15 October. A hushed silence overcame the audience when she entered the studio, immediately followed by self-aware laughter. And there were more laughs to come with stager Patricia Neary’s great wit, energy and humour. Who better to rehearse Balanchine’s masterpiece than one of the first people to dance it? Neary has taught the piece for forty years and she recounted numerous amusing anecdotes about her experiences of working with ‘M. B’, as she affectionately calls Balanchine.

As you’d expect, Neary has very high expectations – and always tells it how it is. ‘It’s not spectacular’, she says to one of the dancers about a particular step just performed. Pat, as she is known in the ballet world, consistently corrects the dancers during the class and gets them to repeat anything that is not totally right. This is the kind of perfectionism that produces the first-rate performances we see on the main stage. And dancers Yuhui Choe, Melissa Hamilton, Johannes Stepanek, Brian Maloney and Eric Underwood don’t seem to mind. In fact, they seem to have great admiration for her. Pat’s passion and enthusiasm for her work is infectious – and this extends beyond the dancers. When Johannes Stepanek gets a step right after Pat’s corrections, there were shouts of ‘yeah’s from the audience and lots of clapping.

Agon will be in performance as part of a triple bill with Wayne McGregor's Limen and Glen Tetley's Sphinx from 4 November 2009.