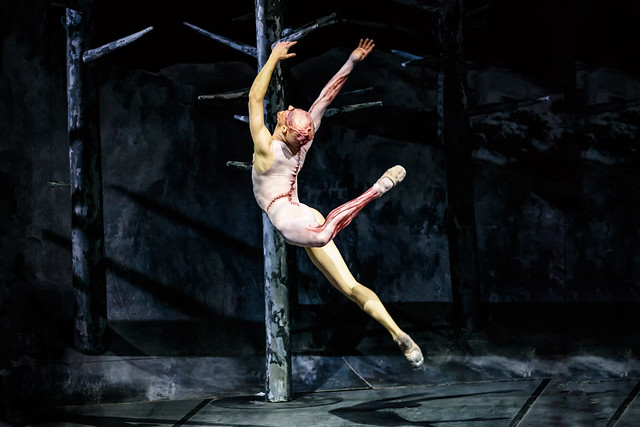 Steven McRae as The Creature in Frankenstein © ROH 2016. Photograph by Bill Cooper

Frankenstein is a period adaptation of Mary Shelley’s Gothic tale of morality and human beings' craving for love, companionship and understanding. In his ballet, Scarlett says he wanted to stay true to the author's original intentions:

‘I needed it to retain the beauty that Shelley retains on the page', says Scarlett of adapting the novel. 'This isn’t a horror story in the sense of a Hitchcock film. It’s an intimate journey for the audience.'

The English choreographer and Artist in Residence of The Royal Ballet assembled a number of regular collaborators for the work including American composer Lowell Liebermann. Scarlett has used Liebermann's music before to score previous works, but this is the composer's first commissioned score for Scarlett. ‘I wanted something hauntingly beautiful’ says the choreographer, ‘and I think he really has done that.’

Scarlett also enlisted designer and artist John Macfarlane, who staged the ballet in the era of the novel’s publication and includes Gothic motifs such as a lavish manor house and a detailed re-creation of a 19th-century anatomy theatre.

In the televised broadcast, Federico Bonelli will dance the role of Victor Frankenstein alongside Laura Morera as his sweetheart, Elizabeth. The Creature is danced by Steven McRae.

Frankenstein will be released on DVD and Blu-Ray on 27 January. It is now available to pre-order from the ROH Online Shop.

Frankenstein will be broadcast from 8pm GMT on 30 October on BBC Four. Please note that broadcast schedules are subject to change.