Follow in the footsteps of Diaghilev’s legendary dance company with a guided walk around Covent Garden. 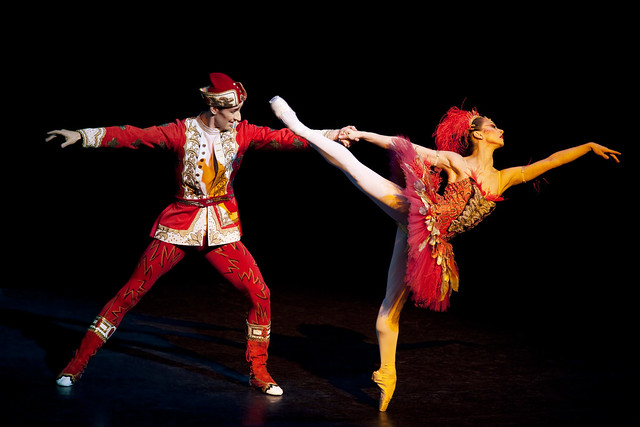 Come to Covent Garden this weekend and you’ll be met by the sight of a brightly lit Christmas tree, an enormous reindeer with a glowing nose and hundreds of red baubles hanging inside the Apple Market.

But if you’d like to see a different side of the area – and have a break from shopping – you might be interested in this Ballets Russes walking tour. It has been developed by Jane Pritchard, Curator of Dance at the V&A, and reveals the company’s close relationship with Covent Garden, uncovering some fascinating stories along the way.

Serge Diaghilev’s Ballets Russes made their British debut at the Royal Opera House in 1911. During the next two decades, the company performed at many of the theatres in the surrounding area (then, as now, the theatrical heartland of London), captivating audiences with their groundbreaking and visually spectacular productions. They drew on the skills of the many craftspeople who worked nearby, from wig-makers and tailors to cobblers and fabric-makers, to bring their shows to the stage, and stayed in some of the world-famous hotels nearby, such as the Savoy and the Waldorf.

A century later, Covent Garden looks very different. But the changes that have been made are largely superficial. While the shop fronts may be different, the facades of buildings often remain the same. For instance, the residence of the celebrated wig-maker Willy Clarkson, who supplied the Ballets Russes with wigs, props and make up, is now the Chinese restaurant Wong Kei. Yet there are tantalizing glimpses of its former inhabitant: a clock with the words ‘Costumier’ and ‘Perruquier’ adorns the front, while a sign claiming ‘Sarah Bernhardt laid the foundation stone of this building 1904’ hints at the building’s theatrical heritage.

The walking tour reveals some wonderful stories. For instance, did you know that it was when rehearsing The Rite of Spring in Chandos House on nearby Maiden Lane that choreographer Leonid Massine and dancer Vera Savina (née Clarke) fell in love? They later married, leading to Savina’s dismissal from the company. And when the Ballets Russes performed at the Shaftesbury Theatre, some of the company were forced to get changed in Holborn Baths (now the Oasis Sports Centre), due to lack of space? They had to cross the busy road in their elaborate costumes to reach the theatre.

The tour also provides an insight into some of the larger historical events in which the company were caught up. During World War I, the Drill Hall on Chenies Street in which the Ballets Russes usually rehearsed was occupied by the army, prompting the company’s move to the Shaftesbury Hotel’s club room on nearby Monmouth Street. The Ballets Russes were in London again when peace was declared on 11 November 1918. After their performance that evening at the Coliseum, the company – including Diaghilev and Massine – were swept up in the jubilant mood and joined the celebrating crowds in Trafalgar Square.

As well as visiting some of the key locations associated with the Ballets Russes, the tour stops off at the National Portrait Gallery, where you can see some of the company’s dancers captured in evocative paintings and photographs, among them Lydia Lopokova, Alicia Markova and Marie Rambert.

The Ballets Russes (in their original incarnation) performed for the last time in London in 1929, again at the Royal Opera House. However, their innovative style of dance transformed the ballet world and their legacy lives on in dance companies round the world. Not least in The Royal Ballet. Tonight The Firebird opens, 100 years after the Ballet Russes first brought this iconic work to Covent Garden. The mythical Firebird will once more dart onto the stage in a flash of glittering red and gold – following in the footsteps of the Ballets Russes.

The Firebird is staged in a mixed programme with Jerome Robbins’s In the Night and Rudolf Nureyev’s Raymonda Act III from 22 December 2012 to 11 January 2013. All performances are sold out though returns may be available, as will a limited number of day seats.