Unique collaboration between The Royal Ballet and National Gallery opens this week. 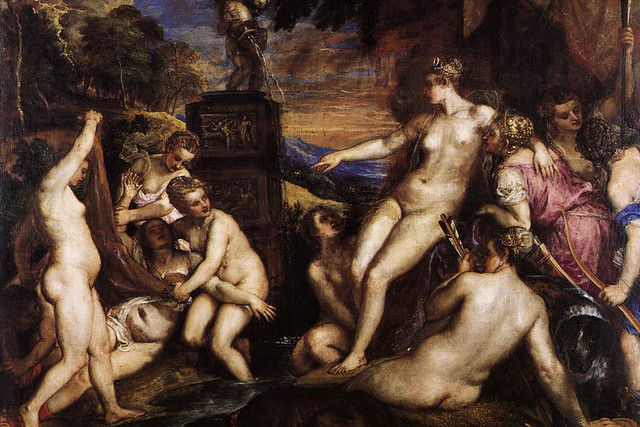 Detail from Titian's Diana and Callisto

Metamorphosis: Titian 2012 opens on stage at the Royal Opera House this Saturday and will be screened live around the country on Monday 16 July as part of BP Summer Big Screens.  The free exhibition at the National Gallery is now open.

The project was inspired by three paintings by the great Renaissance painter Titian - Diana and Actaeon, Diana and Callisto and The Death of Actaeon - and consists of contemporary responses to the iconic artworks.

The original Titian paintings were based on classical poems from Ovid’s Metamorphoses. As part of the exhibition, the National Gallery re-imagined the Diana myth in a contemporary setting:

The National Gallery provides a lot of background information on the project, the contemporary artists involved and the paintings themselves. Take a closer look at one of the masterpieces on which the work is based.

The triple bill, which features an unprecedented number of Royal Ballet Principals and new work from seven leading choreographers, will be Monica Mason’s final production as Director of The Royal Ballet, as well as Tamara Rojo's final performance with the company before taking up the role of Director at English National Ballet.

Watch footage of the rehearsals and interviews with the artists:

The collaboration is part of the London 2012 Festival, for which the Royal Opera House is hosting a wide range of events and performances. Other events include the return of Otello to The Royal Opera, water-based opera The Owl and the Pussycat and The Olympic Journey, an exhibition focusing on the history of the Olympic Games. Find out more about our participation in the festival.