Our quick introduction to The Royal Ballet’s mixed programme of 20th-century American classics and vibrant new works, including the world premiere of Carlos Acosta’s Carmen. 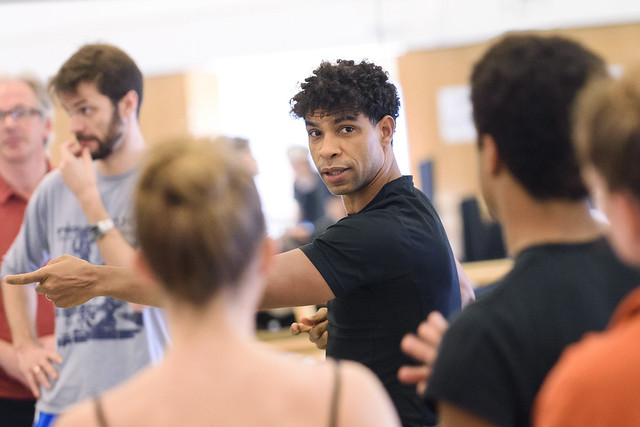 A Collection of Contrasts

Scarlett made his American choreographic debut with Viscera, created with Miami City Ballet in 2012. This abstract ballet is set to the First Piano Concerto by contemporary American composer Lowell Liebermann. Scarlett responds to the dramatic, visceral music with a work that fuses athletic, Balanchinian choreography with elements drawn from his British training. The first and third movements are a dramatic frenzy, revelling in what Scarlett calls the ‘sheer musical velocity’ of the score, while the eerie second movement is ‘the perfect eye of the storm’.

Staring Back at Us

Two dancers, idly rehearsing, gaze intently at themselves in the long studio mirror. In Afternoon of a Faun, this mirror is the ‘fourth wall’ – the audience itself. Robbins’ ballet sets Debussy’s tone poem Prélude à l’après-midi d’un faune and subtly references Vaslav Nijinsky’s 1912 adaptation of the same piece, creating a work that perfectly captures youthful narcissism and sexual awakening. Robbins' Faun has become a miniature classic since its premiere in 1953.

The Essence of Carmen

Carlos Acosta’s second choreographic creation for The Royal Ballet shares a Spanish theme but inhabits a very different world from his 2013 production of Don Quixote. Combining traditional ballet styles with flamenco, contemporary and Cuban dance, Acosta’s Carmen distils the plot of the opera: it homes in on the dark love triangle between Carmen, Don José and Escamillo and focusses especially on Carmen herself. ‘I wanted to establish immediately who she really is’, says Acosta: ‘a force of persuasion, a force of seduction’.

The programme will be broadcast live to cinemas around the world on 12 November 2015. Find your nearest cinema.