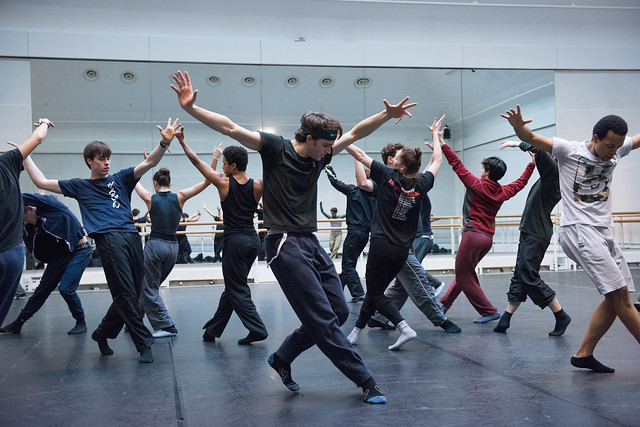 The premiere of The Four Temperaments on 20 November 1946 is widely regarded as a significant turning point in the history of ballet. Balanchine’s choreography was succinctly summarised as ‘kick, wham, fast, hard, big’ by dancer Tanaquil LeClercq, who created a role in ‘Choleric’. Balanchine broke with convention, manipulating and expanding upon the classical vocabulary in a series of striking, unpredictable solos and ensembles that challenged dancers and audiences alike, and introduced new possibilities for ballet as an art form.

Balanchine commissioned the score for The Four Temperaments from Paul Hindemith with the money he had earned working on Broadway musicals. The resulting work for piano and strings is a theme and four variations based on the medieval notion of the four temperaments, or personality types – Melancholic, Sanguinic, Phlegmatic and Choleric. Inspired by the composer’s unusual approach, Balanchine responded with what he described as ‘a kind of stereoscopic choreography for Hindemith’s strong score’ that evokes the attitudes and moods of the temperaments without being directly programmatic.

Israeli-born, London-based choreographer and composer Hofesh Shechter is a leading voice in British contemporary dance. He’s won widespread acclaim for his visceral, politically charged choreography and atmospheric musical scores. Winner of several awards, including the 2008 Critics' Circle for Best Choreography (Modern), he has been commissioned to create works for leading dance companies worldwide. Untouchable is his first piece for The Royal Ballet.

An Ocean of Dancers

The focus in Untouchable, as in the majority of Shechter’s choreography, is on the tribal group, rather than on soloists. He’s choreographed the work on what he describes as an ‘ocean’ of roughly twenty dancers, drawn mainly from the corps de ballet. Shechter’s aim in Untouchable is to ‘meet somewhere in the middle’ between his own heavy, primal style and the dancers’ ballet vocabulary, to create a piece that explores the group’s unique energy.

Song of the Earth

Gustav Mahler’s ‘song symphony’ Das Lied von der Erde (The Song of the Earth) was composed during a painful time in the composer’s life, shortly after the death of his daughter Maria. The work is divided into six movements, the text for which is taken from Chinese poems of the eighth century T’ang dynasty – freely translated into German by Hans Bethge – that address themes of transience, parting and salvation. MacMillan fell in love with the piece and in 1965 used it as the score for his Song of the Earth, created for Stuttgart Ballet and brought into the repertory of The Royal Ballet six months later.

MacMillan worked a narrative into Song of the Earth, drawing on imagery from the translated poems. Focusing on a trio of dancers who perform a variety of solos, pas de deux and pas de trois, he created a ballet that, in his own words, depicts ‘a man and a woman; death takes the man; they both return to her and at the end of the ballet, we find that in death there is the promise of renewal. It is a sort of revelation achieved through death’.