A quick guide to The Royal Ballet's triple programme of one-act ballets by Balanchine, Scarlett and Wheeldon. 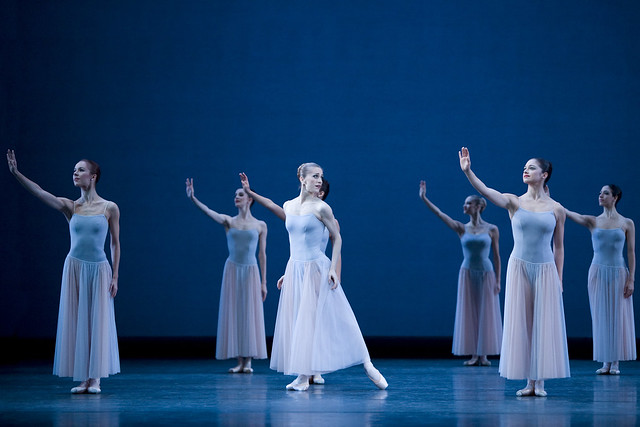 A Dance in the Moonlight
Serenade, which received its premiere in 1935, was the first work George Balanchine choreographed for American dancers. He began working on the ballet at the new School of American Ballet, modelling the formations and key moments in the work on his students, and even incorporating incidents in the rehearsal room – including one girl falling over and bursting into tears – into the choreography. The resulting ballet, a plotless work that celebrates sublime geometry and beautiful line­, was a milestone in the history of dance, streamlining the technique of classical ballet.

‘From the heart’
Serenade is set to Pytor Il’yich Tchaikovsky’s Serenade for Strings, op.48 – a work that the composer once described as his ‘favourite child… from the heart’. Balanchine’s original version of the ballet used only the first three of Tchaikovsky’s four movements, but the choreographer later decided to incorporate the final movement. However, rather than conforming to Tchaikovsky’s structure, he made this movement the penultimate section of his ballet, so that the work still ends with the soaring, melancholic elegy.

A Dance of Death
First performed in 2012, Sweet Violets was Royal Ballet Artist in Residence Liam Scarlett’s first narrative ballet. Inspired by the work and obsessions of the painter Walter Sickert, the ballet explores the facts and conspiracy theories that surround the brutal murders committed by Jack the Ripper. Shadowy, painterly designs by John Macfarlane draw the audience into a seedy Victorian underworld, in which Scarlett’s sensual choreography – full of arched spines, twisted torsos and bodies entwining in complex lifts – brings to life the emotional tensions and inner passions of his protagonists.

‘On the death of a great artist’
The score chosen by Scarlett for Sweet Violets was Sergey Rachmaninoff’s 1893 Trio élégaique. In turn anguished and melancholy, torrid and angry, the work was composed soon after the death of Rachmaninoff’s friend and guide Tchaikovsky, and expressed his grief at the great composer’s passing, as well as frustration at his own impoverishment and loneliness.

Dancing a Journey
Royal Ballet Artistic Associate Christopher Wheeldon drew inspiration for DGV from his chosen score, MGV: Musique à grande vitesse by Michael Nyman, which was composed to commemorate the 1993 inauguration of the north European TGV train. The result is a work that, through extended pas de deux and surging choreography for the corps de ballet, takes the audience on a journey. As the ballet unfolds, moments of propulsive dance and music are followed by others in which time and space become almost suspended, evoking what Wheeldon describes as ‘that feeling you can get when you are travelling… like going into a tunnel, and losing your sense of how fast you are moving, or where you are’.

A Nod to Technology
Wheeldon’s four pas de deux in DGV, which take their cue from the different ‘regions’ in Nyman’s music, seem almost to suggest the journeys travelled by four couples, each with their own distinct personalities. But the ballet also contains more abstract elements. The corps often moves as one unit in formations that suggest machinery at work, while Jean-Marc Puissant’s set designs – huge sheets of contorted metal mesh – bring to mind the modern, technological world that produced the TGV.

The Royal Ballet’s mixed programme of Serenade, Sweet Violets and DGV: Danse à grande vitesse runs from 14 to 26 May 2014. Tickets are still available.