A guide to The Royal Ballet's mixed programme featuring a new work from Wayne McGregor and two masterpieces by Ashton and MacMillan. 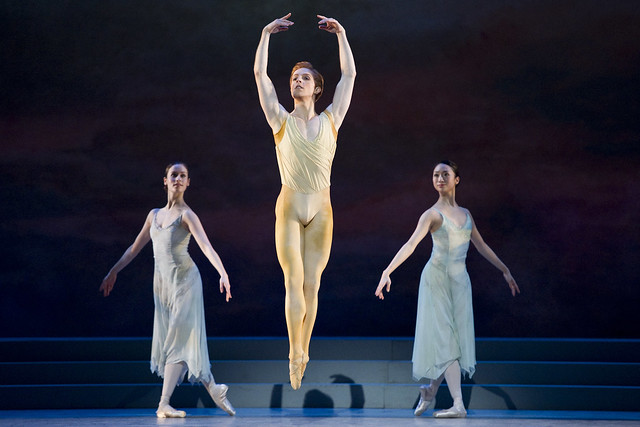 A Very Special Occasion
Frederick Ashton created Rhapsody to celebrate the 80th birthday of the Queen Mother in 1980. Ashton frequently choreographed works for special occasions, and other examples include Homage to The Queen and Birthday Offering. Almost all of these have survived beyond their gala-specific origins to become staples of The Royal Ballet's repertory.

Variations on a Theme
Ashton selected Rachmaninoff’s Rhapsody on a Theme of Paganini, his exuberant final masterpiece for piano and orchestra. He was following in the footsteps of choreographers Mikhail Fokine and Leonid Lavrovsky – but unlike Fokine and Lavrovsky's narrative works, Ashton used the alternately passionate and lyrical variations of Rachmaninoff’s music as the basis for a celebration of pure virtuoso dance. Rhapsody is particularly notable for its dazzling solo male role, created for Mikhail Baryshnikov as the culmination of his series of guest appearances with The Royal Ballet.

Tetractys - The Art of Fugue

The Beauty of Numbers
Discussions of J.S. Bach’s The Art of Fugue often explore the intricacies of its structure, and some even suggest that the work was influenced by the Pythagorean theory of numbers – in particular the pyramidal shape of the tetractys. These ideas inspired Wayne McGregor and Tauba Auerbach, whose choreography and designs for Tetractys –The Art of Fugue reflect the complex geometry of Bach’s music. However, while it is fascinating to explore these links, McGregor is keen that the audience ‘see the oneness’ of his new ballet. In Tetractys, the combination of music, dance and design transcends the codes that fused them together; creating a new, abstract work of art.

An Intriguing Masterpiece
‘What we know about J.S. Bach’s masterly Art of Fugue is just about outweighed by what we do not know’, says Michael Berkeley, who arranged and orchestrated the work for Tetractys. Comprising 19 fugues and canons all in the key of D minor, and with virtually no directions as to the order or manner in which they should be played, this masterpiece is just as baffling as it is astonishing. Its mystique has, over the centuries, resulted in many varied interpretations – Berkeley’s arrangement, which uses seven sections of the work, is one of several which have taken Bach’s four-line stave and translated it across the instruments of the orchestra.

Remembering the Great War
Kenneth MacMillan’s Gloria, choreographed in 1980, laments the generation lost in World War I. Inspired by Vera Brittain’s autobiography Testament of Youth, the ballet’s powerful depiction of the brutality of conflict, as well as its moments of beauty and optimism, resonate as strongly in 2014 – the year which marks the centenary of the start of the Great War – as when the ballet was first performed.

Sensual Spirituality
Michael Somes, then Principal Répétiteur of The Royal Ballet, introduced MacMillan to Poulenc’s Gloria in G major. Poulenc’s setting of a section of the Roman Catholic mass has a profound spirituality while being very far from solemn. Joyous, daring and sometimes downright cheeky, this animated and earthy expression of faith provides a moving counterpoint to MacMillan's sobering exploration of the consequences of war.

The Rhapsody/Tetractys – The Art of Fugue/Gloria mixed programme runs 7–15 February 2014. A small number of tickets are still available. 67 day tickets will be available on the morning of each performance from the Box Office in Covent Garden at 10am.