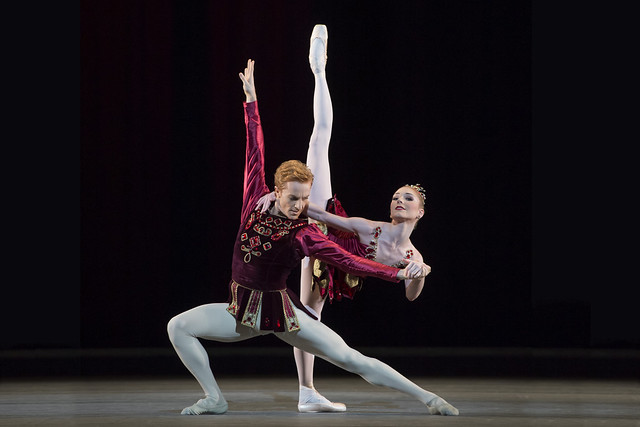 A trip to the jewellers’

Inspired by a trip to the legendary jewellers Van Cleef & Arpels, George Balanchine’s Jewels is an extravagant abstract ballet in three parts, each drawing on a different jewel, a different composer and a different age in ballet history. Jewels itself turns 50 on 13 April this year, having been created for New York City Ballet in 1967.

Jewels in London and around the world

The Royal Ballet first performed ‘Rubies’ in 1989, but it was not until 2007 that all three parts found their way to the Covent Garden stage, in a production with sumptuous new sets by Jean-Marc Puissant. Jewels has returned a number of times since then and this Season The Royal Ballet’s production is broadcast live to cinemas around the world for the first time.

The elegant poise and grace of Romantic France come to the fore in Balanchine’s first part. A corps of ten women shimmer around a series of refined solo numbers for four women and three men, in an act that evokes the 19th century of composer Gabriel Fauré, and ‘the France of elegance, comfort, dress, perfume’, as Balanchine put it.

One of a number of Balanchine ballets to set Stravinsky, ‘Rubies’ is a gloriously bustling setting of the Russian composer’s 1929 piano concerto Capriccio. Many commentators have seen in the ballet’s thrilling energy the furious pace of New York City, Balanchine’s adoptive home. The vivacious outer movements, full not just of leaping but also jogging, frame an enigmatic and athletic pas de deux.

Balanchine turns not only to Tchaikovsky for his grand finale, but also to the Imperial Russian tradition of Petipa and Ivanov, in a ‘white act’ that is a dazzling display for the corps de ballet. ‘Diamonds’ is set to the final four movements of the composer’s Third Symphony, enclosing an enthralling pas de deux before reaching the opulent, full-company climax.

The production will be broadcast live to cinemas around the world on 11 April 2017. Find your nearest cinema.

The production is given with generous philanthropic support from Julia and Hans Rausing, Sarah and Lloyd Dorfman, Lady Ashcroft, Lindsay and Sarah Tomlinson, Peter Lloyd and The Royal Opera House Endowment Fund.