Our quick introduction to this double programme of ballets by Wayne McGregor and Alastair Marriott – one inspired by science, the other by literature. 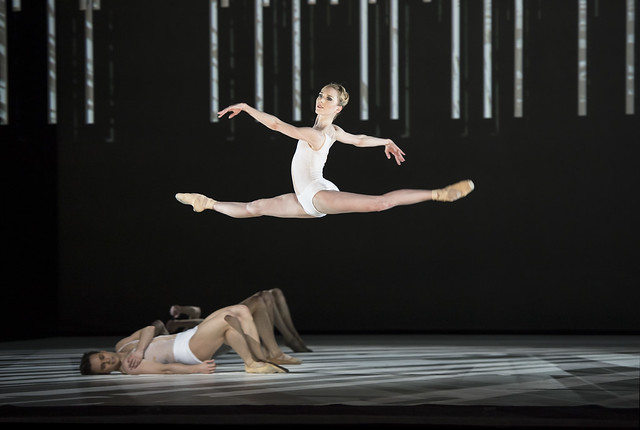 ‘I Am My Connectome’

Alastair Marriott’s Connectome is inspired in part by the theories of Dr Sebastian Seung, who argues that it is not our genes that give us our identity, but the connections between our brain cells – our ‘connectome’. Everybody’s individual connectome is made up of their personal memories, intellect and experiences, and through re-creating and decoding this complex network we can gain a sense of how the workings of the mind shape who we are.

A Journey through Life

Connectome received its premiere in 2014. It features a lone female dancer and two male principals. As the woman journeys through life, her interactions with the two men shape her developing sense of identity. A small corps of four male dancers completes the cast, adding further complexities to the network of connections. Acclaimed set designer Es Devlin collaborated with lighting designer Bruno Poet and projection creator Luke Halls to complete the stage picture.

The music for Connectome consists of four pieces by Estonian composer Arvo Pärt: Fratres, Vater Unser, Silouans Song and Wenn Bach Bienen gezüchtet hätte… One of the most widely performed living composers, Pärt writes in what he calls a ‘tintinnabuli style’, marked by its sublime simplicity and calmness. Pärt’s music returns to the Royal Opera House later this Season, when his Tabula Rasa and Spiegel im Spiegel accompany Christopher Wheeldon’s After the Rain.

For Raven Girl, Wayne McGregor collaborated with visual artist and writer Audrey Niffenegger to create a brand new fairytale, which glances back to fantastical ballets of transformation such as Swan Lake. Their creative process bore two fruit: Niffenegger’s graphic novella, illustrated with her own haunting aquatints, and McGregor’s ballet, set to original music by Gabriel Yared. The ballet’s creative team was completed by designer Vicki Mortimer (Written on Skin) and Lucy Carter and Ravi Deepres, the lighting and video designers who were part of McGregor’s team for Woolf Works.

Once Upon a Time…

Raven Girl is the story of the daughter of a Postman and a Raven. She longs to be able to fly, but has no wings. A Doctor appears with the promise of help, but can he transform her into the raven she longs to be?

Raven Girl’s composer is the Academy Award-winner Gabriel Yared, whose many film scores include The English Patient, City of Angels, The Talented Mr Ripley and Cold Mountain. He has also written much ballet music, for choreographers including Roland Petit and Carolyn Carlson. Yared considers his collaboration with McGregor on Raven Girl ‘one of the most rewarding experiences of my career’, having allowed him to push his imagination to new places.