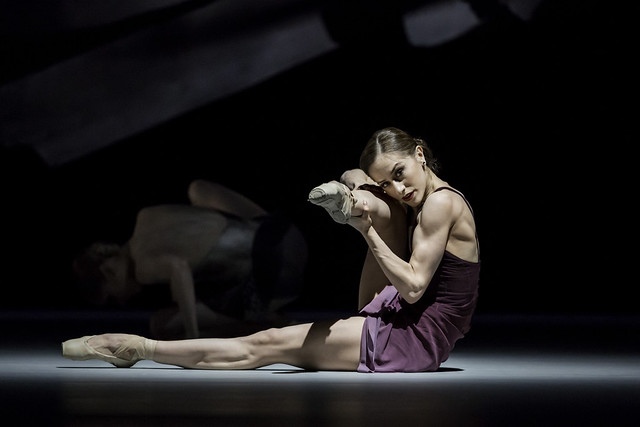 Encountering Youth
Kim Brandstrup created his Ceremony of Innocence for Royal Ballet dancers at the Aldeburgh Festival in Benjamin Britten’s centenary year. The ballet tracks an imagined meeting between a man and his childhood self, through which Brandstrup examines the impact of the passing of youth and innocence. His choreography seeks to capture the artistic conflict of striving to ‘re-create what is missing, lost, absent, not there anymore'.

Brandstrup and Britten
Brandstrup used Britten’s Variations on a Theme of Frank Bridge, a relatively early work and often considered his arrival into maturity as a composer. Brandstrup first choreographed to Britten’s music for a 1992 production of Death in Venice, his final opera. Though the pieces are from opposite ends of Britten’s output, Brandstrup identifies strong musical and thematic links between Death in Venice and Variations, of loss and longing for youth – which are reflected in Ceremony of Innocence.

The Age of Anxiety

'We Would Rather Be Ruined Than Changed'
The Age of Anxiety is Royal Ballet Artist in Residence Liam Scarlett’s second narrative work for the Royal Opera House main stage. His starting point was Leonard Bernstein’s Symphony no.2, ‘The Age of Anxiety’, which itself was inspired by W.H. Auden’s 1947 poem of the same name. Scarlett’s ballet follows Auden’s four protagonists on an evening of drunken excesses, as they search for identity in an evolving world.

Inspired Creation
For Scarlett, dancers play a central role in the creation and interpretation of his choreography – he says that 'Making a ballet is all about specific dancers'. For Age of Anxiety he has selected two small casts that include performers from across the ranks of The Royal Ballet. He’s tailored his selection to fit Auden's characters, who are 'fairly defined in terms of substance and background', while at the same time encouraging the dancers to allow their roles to 'come from within'.

Sinfonia da Requiem
Like Brandstrup, Christopher Wheeldon has a longstanding affinity with the music of Britten. He first fell in love with Britten’s music early in his career, dancing with The Royal Ballet as Kenneth MacMillan created his version of The Prince of the Pagodas. For Aeternum, he selected the composer’s Sinfonia da Requiem – a harrowing memorial symphony to Britten’s parents, and a cry against the horrors of war. Taking his inspiration from the score, Wheeldon’s ballet addresses the fear, terror and pain of loss, but ends with a sense of optimism to match what he describes as the 'light-filled' final movement.

The programme is given with generous philanthropic support from Richard and Delia Baker (Ceremony of Innocence) Simon and Virginia Robertson, Kenneth and Susan Green, Karl and Holly Peterson, The Age of Anxiety Production Syndicate, the Friends of Covent Garden and an anonymous donor (The Age of Anxiety) and The Royal Opera House Endowment Fund.