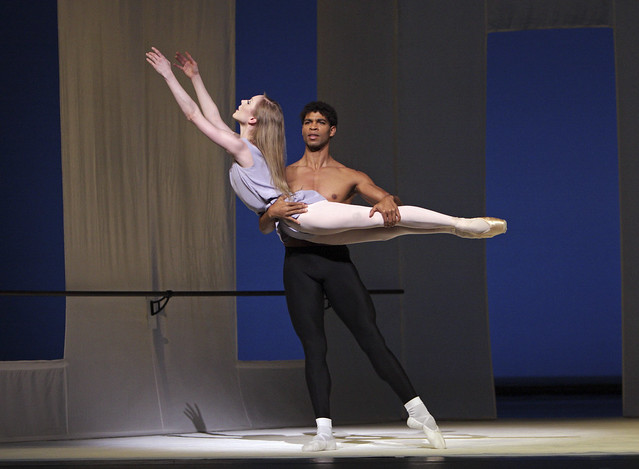 Sarah Lamb and Carlos Acosta in Afternoon of a Faun, The Royal Ballet © Dee Conway

Afternoon of a Faun

A Miniature Masterpiece
Afternoon of a Faun, a relatively early ballet by American choreographer Jerome Robbins, has become one of his best-loved and most enduring works. At just ten minutes long, it gives a fleeting glimpse into what Robbins described as ‘a room with a mirror’, in which a young couple dance a lyrical, trance-like pas de deux. Robbins created the ballet for the New York City Ballet dancers Tanaquil Le Clercq and Francisco Moncion, and it has since seen numerous revivals by ballet companies worldwide.

Inspiration and Interpretation
One of the primary influences for Robbins’s Afternoon of a Faun was its music – Debussy’s Prélude à l’après-midi d’un faune. Inspired by an 1876 Mallarmé poem that describes the reveries of a faun around a real or imagined encounter with nymphs, the score is widely considered a turning point in the history of music. Unlike Vaslav Nijinsky, who had adapted the Prélude in 1912 for a graphic ballet in which a young faun pursues several nymphs, Robbins used it as the basis for a subtle, sensual pas de deux open to a range of interpretations.

‘Dance is about relationships’
In the Night is another Robbins ballet that places insightful, character-driven pas de deux at its centre – though this time the focus is on three very different romantic partnerships. While true to Robbins’s credo that ‘dance is about relationships’, In the Night delves deeper, examining not just young, carefree love but also more complex and mature partnerships. Set against a simple black backdrop studded with stars, three couples appear one after another, each dancing a pas de deux before coming together.

Robbins and Chopin
Of the many scores used by Robbins for his ballets, it was the music of Fryderyk Chopin that he returned to time and again. Robbins created his first Chopin ballet, The Concert, in 1956. This was followed in 1969 by Dances at a Gathering – a work in which he said that ‘all gestures and moods, steps, etc. are part of the fabric of the music’s time and its meaning to me’. In the Night makes use of four contrasting Chopin nocturnes, while Robbins’s final Chopin ballet, Other Dances, pays homage to the composer in a series of short, folk-infused dances set to four mazurkas and a waltz.

Song of the Earth

Das Lied von der Erde
Gustav Mahler’s ‘song symphony’ Das Lied von der Erde (The Song of the Earth) was composed during a painful time in the composer’s life, shortly after the death of his daughter Maria. The work is divided into six movements, the text for which is taken from Chinese poems of the eighth century T’ang dynasty – freely translated into German by Hans Bethge – that address themes of transience, parting and salvation. Kenneth MacMillan fell in love with the piece and in 1965 used it as the score for his Song of the Earth, created for Stuttgart Ballet and brought into the repertory of The Royal Ballet six months later.

Man, Woman, Death
MacMillan worked a narrative into Song of the Earth, drawing on imagery from the translated poems. Focusing on a trio of dancers who perform a variety of solos, pas de deux and pas de trois, he created a ballet that, in his own words, depicts ‘a man and a woman; death takes the man; they both return to her and at the end of the ballet, we find that in death there is the promise of renewal. It is a sort of revelation achieved through death’.

The Royal Ballet’s mixed programme of Afternoon of a Faun / In the Night / Song of the Earth runs 29 May–4 June 2015. Tickets are sold out, though returns may become available and there are 67 day tickets for each performance.

The programme is given with generous philanthropic support from Sarah and Lloyd Dorfman.