Backstage with the ROH Costume Department

With up to 10,000 costumes used each year, getting The Royal Ballet and The Royal Opera ready for the stage is a work of art in itself. 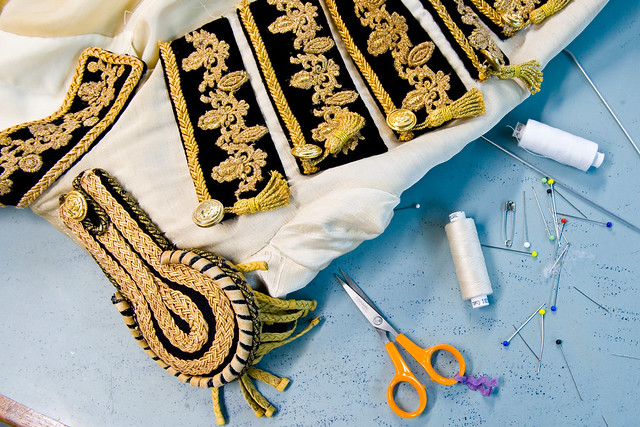 From gem-encrusted leotards to authentic period corsets, the Royal Opera House Costume Department is responsible for creating, refurbishing and conserving thousands of opera and ballet costumes per season. A 160-strong team is spread across three floors of the Royal Opera House. There is no such thing as a quiet day and, with up to six hundred costumes per production, staying ahead of the game is vital.

The Dye Shop work three to six months in advance, covering eight productions at any one time. Their work includes dying, hand-painting and staining garments (even providing copious amounts of fake blood!). In addition, digital printing enables the team to reproduce historic fabrics no longer available – staging The Winter’s Tale for example requires digital printing some 300m of fabric for the Shepherdess costumes alone. The dye team work closely with the Costume Workroom, preparing and painting fabrics as the Workroom team cuts, tacks, sews and fits.

‘We always cut initial patterns out of calico – it’s inexpensive and versatile, and so the perfect fabric for us to check the design. We then start working with the proper fabric, fitting each costume to the performer’, says Catriona Paterson, Head of the Ladies Workroom. ‘There are only four full-time sewing assistants in our workroom, and so we focus on the Principals – which is a substantial undertaking in itself. Take Don Quixote – there were only three costumes for Kitri, but we had to do five lots of each for the different casts. Similarly, principal opera singers will only arrive two or three weeks before rehearsals, and costumes need to be ready for them from the very beginning of their time in the studio.’

Behind-the-scenes at the Costume Department. © ROH 2012

For new productions, the department works with the designer right from the first stages.

‘It’s quite an intimate relationship with the designer as we work literally next to each other all the time’, says Costume Supervisor Ilaria Martello. ‘I have to understand and interpret their vision, and arrange what fabrics and processes are needed to achieve the design. At the stage rehearsals, there will be always be changes because of the lighting, distance, interaction and movement. My job doesn’t really finish until the first night!’

The costumes on the Royal Opera House stage not only have to fit the designer’s vision, but also need to be practical. For ballet, this means enabling free movement – something the Costume Department is all too aware of.

‘Ballet fabric needs to be light and stretchy, particularly over the shoulders, to allow for maximum movement’, continues Catriona, who is now in her 16th year at the Royal Opera House. ‘If the dancer is being lifted, how slippery is the fabric? The designer might have to be told that satin won’t work, or we might discreetly add net or rubber patches.’

A huge number of components can be required for any one costume – the much-loved tutu in particular. Each skirt will need elastic, ribbon, hooks and bars, tape and boning, wire and threads. Similarly, a skirt for La Sylphide requires about 100m of netting – seven layers, each with an average of nine panels that each measure up to a metre each. Having everything to hand at the right time is quite a task for the costume stockroom.

‘Everything has to be of the best quality so that it lasts a long time – nothing is disposable’, says Stockroom Assistant Eloise Smith. ‘Space dictates what is ordered and when, but we have to have everything to hand and so we only have small quantities of each item. It’s a moveable feast!’

Over the years, the ROH Costume Department has built up a historic costume collection of more than 5,000 items, including shoes dating back to 1861. Some of the collection will soon be housed in the new Costume Centre at the High House Production Park, alongside costumes from productions still in the repertory.

Mal Barton, Head of Costume Workroom, is in charge of maintaining all of the costumes from existing Royal Ballet repertory – the oldest of which includes the costumes in Romeo and Juliet, which are from 1975.

‘There are about 500 costumes for Romeo and Juliet, and around seventy percent of them are original,’ explains Mal. ‘There is a lot of wear and tear – some will have been re-fitted 20 times – but they last a long time because of good maintenance and repair. It takes the entire revival workroom (about 18–20 people) some 1,500 hours to refurbish the costumes in the workrooms, a job we need to start working on at least six weeks before rehearsals start.’

For the 2015/16 Season, the Costume Department will be working on 12 new productions, and 27 revivals. With such a diverse and demanding workload, it’s no surprise that high quality costume-makers are high in demand, and the department encourages training for promising students. Last Season, the department offered 48 work experience placements and, from next Season, will be supporting a new degree course in Costume Construction.

The Costume Department's work is directly supported by the Sewing Appeal, which funds anything from stockroom supplies to work experience placements: £170 will pay for the training of one work experience student, while £150 will buy enough calico for eight prototype costumes and £50 will buy a pot of specialist fabric dye. 'Across both art forms, we produce more than 50 productions per Season, which means we look after 10,000 costumes a year', says Mal. 'When it comes to setting the scene and helping to tell the story of an opera or ballet, costumes are vital.'

The Royal Opera House is a registered charity and your support makes a very real difference to our work.