‘Away from all the slander of the world’: a letter from Frederick Ashton in the ROH Collections

In this 1948 letter to dancer Richard Beard, Ashton discusses the creative process behind Scènes de ballet. 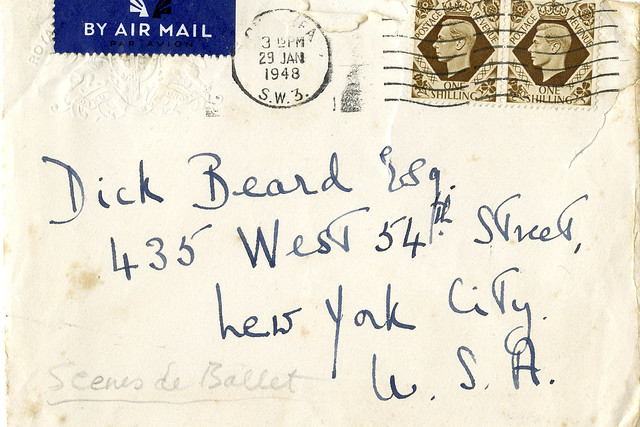 Crop of the envelope of Frederick Ashton's letter to Richard Beard, 29 January 1948. Reproduced with permission of Anthony Russell Roberts

One of the many treasures in the Royal Opera House's Collections department is an invaluable set of letters written by Frederick Ashton, Founder Choreographer of The Royal Ballet, to the American dancer Richard Beard, and donated to the Collections by Beard.

In one written on 29 January 1948, Ashton describes the creative process behind Scènes de ballet, less than two weeks ahead of its premiere on 11 February.

Ashton made ingenious use of Euclidean geometry in Scènes de ballet, and later described its 'distant, uncompromising beauty which says I am here, beautiful, but I will make no effort to charm you'.

But in this tender letter to a man who would later become his lover, Ashton suggests the ballet had a more passionate inspiration (although the rising pavilion he mentions would not make it to the premiere): 'in the apotheosis the man & woman are united in bliss & rise on the lift… away from all the slander of the world & live for each other only, & they are in a sort of fantastic pavilion of love'.

The letter includes sketches and descriptions of the costumes – the hats worn by the female corps de ballet are described as 'a cross between a greek column & a toreador's hat!'. 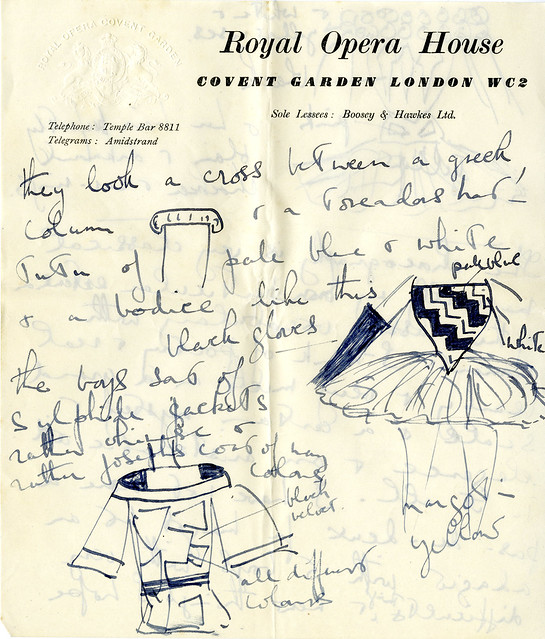 It was not all plain sailing with designer André Beaurepaire, though; Ashton hints at working through 'all [the ballet's] problems not the smallest of which has been Beaurepaire'. But the letter also contains a touching description of Ashton's fellow choreographer George Balanchine: 'I was pleased at his hand of friendship for I admire him beyond all other choreographers'.

Ashton made Scènes de ballet an homage to Marius Petipa, choreographic counterpart to Tchaikovsky – the perfect partner for Stravinsky's Tchaikovsky-inspired score. Ashton describes the choreography as 'very classical[;] naturally my own particular extension of the classic vocabulary with moments I think of poetry & real beauty & very much on a grand scale & a certain mystery & elegance & an aristocratic air to it all… very different things & new things I hope.'

Ashton also sent a newspaper clipping, showing him at a New Year's Ball. Also enclosed were some of Beaurepaire's set designs and a photo of himself. 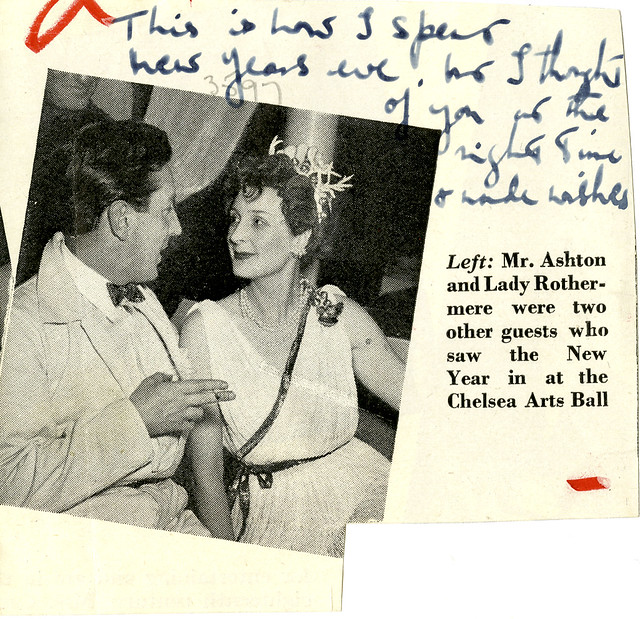 Lastly, Ashton dedicates the ballet to Beard: 'All of it, my darling, for what it is worth, I dedicate to you with my love.'

Dearest Dick,
Our letters always seem to cross which means that we think of each other simultaneously & I like that, but then it only means that I wait for you to write again & hope you will write again & you don’t; when I can’t wait any longer to hear from my beloved I have to start & here I am pen in my hand & heart & mind with you.
I have as you can guess been very busy not too busy to think of you as you say of me but unable to take up my pen as I have to be right to communicate with you – somehow & naturally I have been obsessed with my new ballet & all its problems not the smallest of which has been Beaurepaire, but I have all the time thought of what you said & carried your orders to me in my head & tried to carry them […]
Is it good enough for him, would you kiss me tenderly and say "you did well today". I am getting to the end of it & today I went through it. I have still one of Margot’s variations to do & naturally bits here & there to improve on. I use 12 girls & 4 boys & 2 principals. I always have my seasonal obsession as you know but in no way do I carry it out in the ballet and nor is there any implication of myself in it as there is
in your ballet, only that in the apotheosis the man & woman are united in bliss & rise on the lift (you know what I mean the stage level rises up) away from all the slander of the world & live for each other only, & they are in a sort of fantastic pavilion of love. Which rises & rises while another part of the stage, in front of them, with architecture on it, descends at the same time making their rise look even higher. It is quite effective
& curious you should say in your lovely letter that it should "all sink to oblivion before their eyes". The set is finally a very good set as such but not really suitable for this ballet, more for a Greek play but it is grand, the costumes I have had much trouble with him over in fact we almost quarrelled he is tiresome & superficial & the French desire to astonish is tiresome to me who prefers things to be right
rather than outré – & elegant rather than chic – but by dint of simplification I have I hope arrived at something. I have now one costume for the girls & one for boys instead of all different or 4 sets as I thought of as are fine & I have so fixed them now that all embellishments can be cast off if necessary at the dress rehearsal. The girls may wear hats like this, they look well on – of black velvet encrusted at the side with pearls & diamonds sewn tightly together. Pearl earrings & pearl chokers
They look a cross between a greek column & a toreador’s hat! Tutu of pale blue & white & a bodice like this. The boys sort of Sylphide jackets rather chinese & rather Joseph’s coat of many colours. Margot in yellow – and her hair perfectly plain & diamond choker & earrings.
The choreography is very classical naturally my own particular extension of the classic vocabulary with moments I think of poetry & real beauty & very much on a grand scale & a certain mystery & elegance & an aristocratic air to it all. I have not done a pas-de-deux for Margot but an adagio with 5 boys with very different things & new things I hope.
All of it, my darling, for what it is worth, I dedicate to you with my love.
Balanchine has invited me to come & do something for ballet society immediately after but I can’t as we have to go to Holland in March. I was pleased at his hand of friendship for I admire him beyond all other choreographers […]'

ROH Collections are currently cataloguing the Richard Beard Collection of correspondence, so that it can be made available to a wider audience of researchers.
Find out more about the work of ROH Collections and browse the Collection here.