When the idea emerged in 1945 to move the Sadler’s Wells Ballet company across town to the Royal Opera House, there was a moment of hesitation. It was the economist (and Arts Council founder) John Maynard Keynes who had made the proposal, but the Company’s founder, Ninette de Valois, was initially uncertain about the sheer scale of the suggested new home – could they fill the auditorium with performances grand enough for the space? And could they fill it with enough people? Founding Choreographer Frederick Ashton, on the other hand, was enthusiastic about the proposal, and eventually it was agreed.

The choice of opening production – The Sleeping Beauty – was uniquely appropriate. The ballet’s theme of awakening after long sleep chimed perfectly with the re-opening of the Royal Opera House after World War II, when it had been used as a dance hall. And, of course, the production also represented a new beginning for the Company, setting out on the path that would see their establishment as a vital part of the Royal Opera House and the granting of the Royal Charter in 1956.

De Valois was aided in her production by the designer Oliver Messel, who created sets and costumes that transcended the meagre resources that post-war London, still on ration books, had to offer. We can still catch a glimpse of his beautiful original designs thanks to Frank Sharman’s evocative colour photography.

But the ballet is also preserved in a more dynamic form. Monica Mason and Christopher Newton’s 2006 production of The Sleeping Beauty is a detailed re-creation of the 1946 production, with Messels’s designs updated by Peter Farmer. 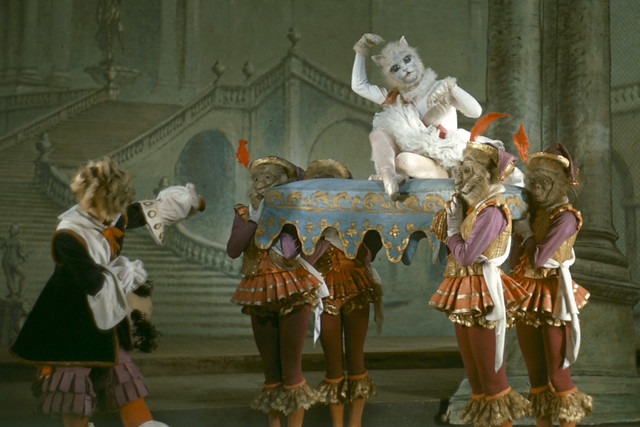 The kiss of awakening itself, perhaps the ballet’s most famous moment, forms the climax of Act II. Princess Aurora has been asleep for a hundred years, awaiting the kiss of a prince – and the Lilac Fairy has led Prince Florimund to her, deep in the heart of the forest. As he kisses her, the huge crash of the tam-tam heralds the vanquishing of the evil fairy Carabosse, and Aurora awakes, along with the rest of the court.

Comparing a contemporary film to archive footage of this moment from 1959, with Michael Somes as Florimund and Margot Fonteyn as Aurora, gives a sense of how the ballet has changed over time. But as it returns to the Covent Garden stage once more, The Sleeping Beauty remains far more than just a repertory ballet for the Company. It’s a key part of The Royal Ballet’s identity, and each time Aurora awakes, that moment in 1946 when the Company found its new home comes briefly back to life.

Find out more about the history of the Royal Opera House.

The Sleeping Beauty runs until 14 March 2017. Tickets are still available.
The performance on 28 February 2017 will be broadcast live to cinemas around the world. Find your nearest cinema.

The production is staged with generous philanthropic support from Mrs Aline Foriel-Destezet, Hans and Julia Rausing, Lindsay and Sarah Tomlinson and The Royal Opera House Endowment Fund. The production is sponsored by Van Cleef & Arpels. Original production (2006) made possible by The Linbury Trust, Sir Simon and Lady Robertson and Marina Hobson OBE.