We asked audience members at the opening night of Wayne McGregor and Max Richter's Sum for their thoughts. 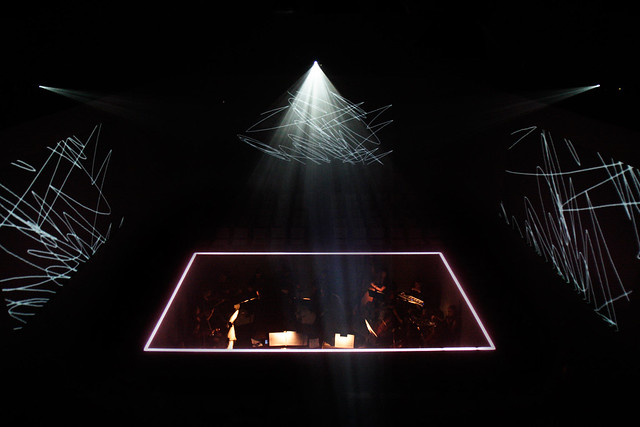 We asked members of the audience at the opening night of Wayne McGregor and Max Richter's Sum for their thoughts on the new work, a piece that tackles ideas of what the afterlife could be like...

undefinedStaticflickr
Jon: "I thought it was brilliant and really thought-provoking. There are so many ideas in there that I thought they could have been explored further but as a catalyst for digging deeper into the ideas it was top notch. I think I'm going to have some strange dreams tonight."
undefinedStaticflickr
Sheridan: "I thought it was excellent and inspirational. I'm a composer myself and hadn't previously read the book so was mainly concentrating on the music but I thought it was well staged. In terms of the music there was a diverse range of sound and I thought the musicians were great."
undefinedStaticflickr
Mike: "I thought it was very moving and caused you to reflect upon the themes of the piece. My particular favourite story was that in the afterlife you relive all your experiences, but this time with the events reshuffled into a new order: all the moments that share a quality are grouped together, for example for five months straight you flip through magazines while sitting on a toilet! The piece was incredible.
undefinedStaticflickr
Emilia and Linda (AKA The Ballet Bag): "It was quite a lot to absorb but very interesting. We both liked the end and thought that the music and visualisations fitted the subject matter very well. Linda had read the book, The story featuring idea of three separate deaths was particularly impactful."
undefinedStaticflickr
Nelida: "I'm more of a fan of traditional opera and love Wagner but I thought it was good. I do wish there was more singing though."
Afterwards, author David Eagleman commented on seeing his book adapted into a chamber opera...

Read interviews with Max and Wayne...
Listen: Max Richter on SumChoreographer-turned-director Wayne McGregor and composer Max Richter were recently the subjects of an ROH Insights session that focused ...
Wayne McGregor on Sum: "A brilliant collision"Imagine an opera where the audience is very much part of the experience. A small group of 150 sits around the orchestra pit, the space ar...
Listen to Stephen Fry reading an extract from the book...
Stephen Fry reads from David Eagleman's Sum: Forty Tales from the AfterlifeAuthor and broadcaster Stephen Fry reads from Sum: Forty Tales from the Afterlife, neuroscientist David Eagleman's first work of fiction
If you've seen Sum, what did you think? The piece runs until 2 June. Book tickets

This article has been categorised Opera and tagged by David Eagleman, by Max Richter, by Wayne McGregor, feedback, Production, Reviews, ROH2, Sum, Sum: Tales from the Afterlife