Music Director receives award from the Incorporated Society of Musicians. 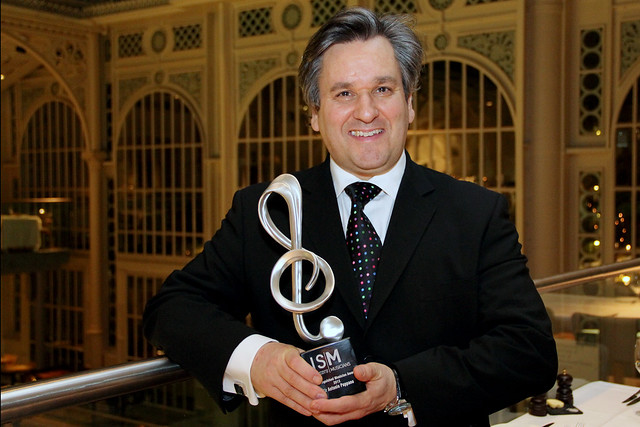 Antonio Pappano, Music Director of The Royal Opera, has been presented with the prestigious Distinguished Musician Award by the Incorporated Society of Musicians (ISM).

The award is conferred by the ISM to recognize outstanding contributions to musical life in the UK and previous winners include Janet Baker, Pierre Boulez, Colin Davis and Simon Rattle.

Of winning the award, Antonio said:

“When I perused the list of previous ISM Award recipients I gulped!  To be included in such an illustrious pantheon is an honour.  The society does crucial work to keep classical music alive, well and relevant in this country, especially for young people, so I am very proud indeed to be associated with it.”

Antonio joined The Royal Opera as Music Director in 2002 and since then has conducted a number of productions, most recently the Ring Cycle and Otello. He is also the Music Director of the Accademia Nazionale di Santa Cecilia in Rome and has conducted widely in the United States and Europe as well as recording extensively. Antonio's previous awards for musical achievement include ‘Artist of the Year’ in the 2000 Gramophone Awards, the 2003 Olivier Award for ‘Outstanding Achievement in Opera’ and the Royal Philharmonic Society Music Award 2004 in the conductor category.

Watch a vocal masterclass from Antonio, in which he works with two Jette Parker Young Artists, Jihoon Kim and Michele Gamba on Banco's aria from Verdi's Macbeth:

Antonio Pappano will conduct Verdi's Don Carlo, which runs from 4 - 25 May. Tickets are still available.