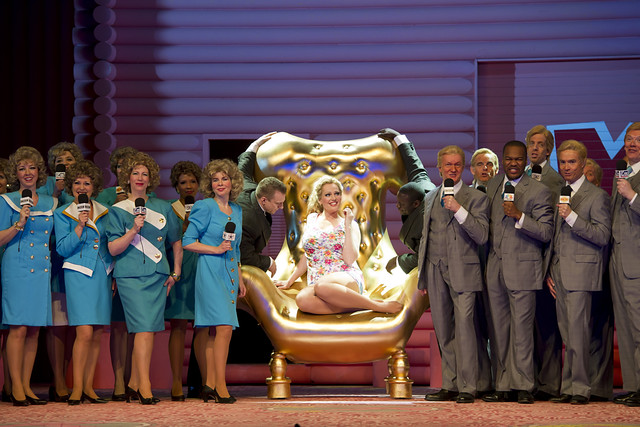 It’s been long in the planning and last night it happened: Anna Nicole. We’re all abuzz with excitement after last night’s premiere. It must be one of the most hotly anticipated nights in opera for years – the challenge to combine classical tradition with contemporary culture. Congratulations to all concerned: Mark-Anthony Turnage, Richard Thomas, Richard Jones, and Anna Nicole herself – the statuesquely beautiful Eva-Maria Westbroek - who moved the entire house with the strength of her performance.

The atmosphere was electric at lights down in a packed auditorium remodelled in Anna Nicole’s honour – with a shocking pink curtain and myriad images of the woman herself. Opera critics (pens at the ready) mingled with British celebs, glamorous enough to rival (almost) the magnificent Anna. Taking their seats were pop star Boy George, queen of British fashion Vivienne Westwood, queen of shops Mary Portas, and Julian Barratt of Mighty Boosh fame (a ‘jazz maverick’ – who surely will have appreciated Turnage’s jazz-fusion sounds). Perhaps most flamboyant were the Texas design duo Patrik and Pol, the real-life Anna Nicole’s dress designers who had flown in for the event (they made her wedding dress and funeral dress). Rumour has it Larry King may have been there as well.

The house hushed as Antonio Pappano signalled to the orchestra to commence the tale of Anna Nicole - its highs, lows and tragic end. As the flamingo pink curtain finally came down the audience gave a huge round of applause and a sustained standing ovation. Eva-Maria took her well deserved bow clutching a bouquet of flowers befitting her tragic character – hers was an amazing performance in this most unorthodox of operas. Anna/Eva we salute you!

Check out the frocks/the boobs and Old Man Marshall. Exclusive pics of Anna Nicole, and our feed of all the Anna Nicole tweets.

Wynne Evans as The Mayor of Mexia in Anna Nicole, The Royal Opera, © ROH / Bill Cooper 2011

Top tweeter of the night:

Boy George's tweets from the House

@1stpost It was great, the OH is totally amazing which just adds to the night!

This article has been categorised Opera and tagged anna nicole, photos, premiere, The Royal Opera