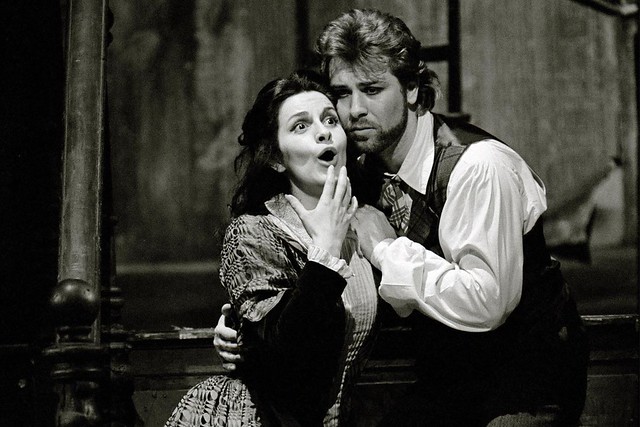 Angela Gheorghiu and Roberto Alagna mark the 20th anniversary of their meeting by singing together in John Copley’s production of La bohème this evening.

The couple first met at the Royal Opera House in 1992 when performing in the same production. Four years later they married in a ceremony on the main stage of the Metropolitan Opera. The couple celebrated 20 years since their meeting with a special cake sent in by a fan which they shared during Friday’s rehearsal.

Angela, who made her international debut in the 1992 performance of La bohème, shot to fame in 1994 following her electrifying performance as Violetta in Richard Eyre’s production of La Traviata, the same production in which she sang alongside Roberto for the second time with The Royal Opera in 1996. This season, Angela's performances in Faust, Adriana Lecouvreur and Tosca were broadcast across the world as part of the Royal Opera House cinema season. Next season, the Romanian soprano will perform the role of Magda de Civry in Nicholas Joël’s production of La rondine.

Roberto’s career also took off at the same time, following his acclaimed performance as Roméo in Nicolas Joël’s production of Roméo et Juliette in 1994. Next season, the French-Italian tenor will sing the role of Nemorino in Laurent Pelly’s production of L'elisir d'amore.

Leave a reply to Peter · Cancel