The ballet conductor Andrea Quinn reflects on her personal journey to the orchestra pit and leading a conducting workshop for women at the Royal Opera House. 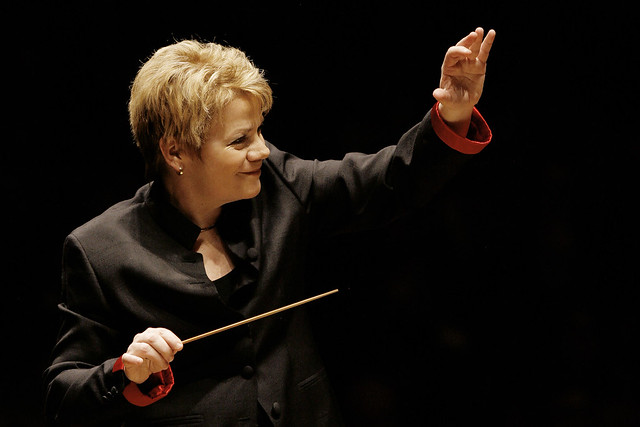 When I became interested in conducting, I was of course aware of the lack of prominent female conductors, but this was not the primary focus for me – the music was and is!

In my teens, I discovered an old score in the piano stool at my grandparents’ house. It was Johannes Brahms’s First Symphony. I hadn’t been exposed to such things before and intrigued, I bought a Classics for Pleasure recording of the work, with James Loughran conducting – for hours I sat with the score, listening, following, and trying to make sense of it.

My interest in the world of orchestral sound was fully ignited through this experience.

My father was a film sound recordist – which is perhaps where I get my love of orchestral sound from. To me, the orchestra is one large instrument, with infinitesimal possibilities for tone colour and dynamic range. Composing could have been an alternative career but my lack of abilities in that direction forbade it.

The gender issue is a tricky one. Once it becomes an unhealthy focus then the energies risk being directed that way rather than simply trying to be as decent a conductor as possible. That’s the advice I gave the women at a recent ballet conducting workshop held at the Royal Opera House.

I am wary of gender-specific workshops – I worry that by labelling workshops ‘women only’, the whole event potentially becomes about the issue – but right now there is a disparity between the number of female and male conductors and valuable initiatives like this are hopefully encouraging more women to conduct.

The event was very interesting, and we had wonderful access, from observing talented Royal Ballet Young Choreographer Charlotte Edmonds at work with dancers in the studio, to words of wisdom from The Royal Ballet’s Chief Pianist Robert Clark, and Senior Ballet Master, Christopher Saunders.

The weekend focused on what it means to become a ballet conductor and survive as one. A conductor for this genre has to have the art of compromise – it’s an added challenge to interpret a score, make it sing with the choreography while retaining the musical integrity of the composer’s intentions. A ballet conductor requires tenacity and subtlety, giving strong direction to musicians while coping with the choreography and any spontaneity that may happen on stage.

As the repertory expands, conducting for the ballet is more exciting than ever and I urge all conductors (of all genders) to consider it. To my shame I had never seen a full-length ballet before I applied for and won The Royal Ballet and Birmingham Royal Ballet’s competition ‘Conduct for Dance’ in 1993, expertly instigated and run by Barry Wordsworth. This gave me so much opportunity to become immersed in an art form which has become so special to me. I hope others will be inspired to do the same.

One of the great risks of conducting is that we have no possibility to hide in a practice room to hone our skills. This can lead to a lack of self-confidence in the young conductor. A conductor (male or female) should never stand in front of the orchestra and apologize for being there, through their body language or verbal means. This of course does necessitate a thorough preparation beforehand which, as I have learnt, is the only thing that will give the conductor true confidence in what they are trying to impart.

I am sure that many more female conductors will grace the podiums in future years. I was told by one of the participants of the Women’s Conducting Workshop, that female student conductors have outnumbered men in a year’s intake at the Royal Academy of Music, a very different scenario to when I was there. The future looks bright for female conductors and I hope we are on the way to a more equal environment, where a conductor is only assessed on skill and talent and not their sex.

Andrea Quinn studied conducting at the Royal Academy of Music. She has been Music Director for companies including The Royal Ballet, New York City Ballet and Sweden’s Norrlandsoperan conducing ballet, opera and concerts.

The Women’s Conducting Workshop was held at the Royal Opera House in association with Morley College.