In a guest blog, The Ballet Bag catch up with The Sleeping Beauty's Lilac Fairy. 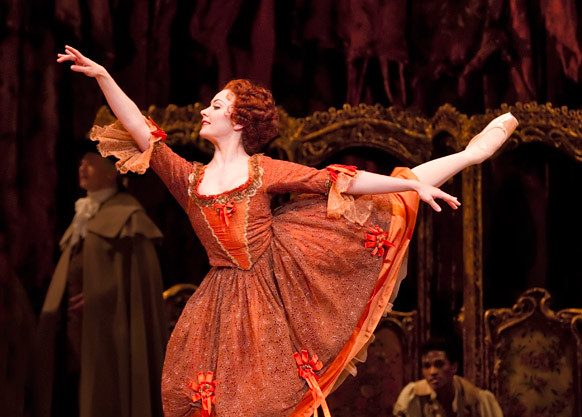 Two years ago Claire Calvert was plucked from the corps de ballet and cast as the Lilac Fairy, a key character in one of the Royal Ballet's most iconic works, The Sleeping Beauty. The 23-year-old First Artist has since landed  other plum roles including Lescaut's mistress in MacMillan's Manon and Winter Fairy in Ashton's Cinderella.

The Ballet Bag recently caught up with Claire to talk about the thrills and challenges of performing in all these ballets, as well as The Sleeping Beauty's current revival.

The Ballet Bag: You have been getting a lot of Principal roles over the last seasons and right now you’re cast as the Lilac Fairy. How do you see your career evolving?

Claire Calvert: I have got particularly difficult roles since I joined the company, above my rank obviously. I hope this will continue, that I'll get more and more. I almost missed out a little bit on the basic soloist roles, like the other fairies in The Sleeping Beauty.

TBB: Would you have liked to dance these roles?

CC: I feel I would, but at the same time, I'm happy with what I do: this is my fifth year in the company and I've danced a few roles that some dancers will never get to do in their whole careers.

TBB: How do you deal with all this pressure?

CC: I like it. I like dancing big roles. Tonight is the opening night of The Sleeping Beauty and I'm the Lilac Fairy. When we were on tour two years ago in Barcelona, I also danced it on opening night, which to me was an amazing achievement. After that I did Winter Fairy in Cinderella and then Lescaut's Mistress and a courtesan – both debuts during the same run of Manon. I actually danced Lescaut's mistress before courtesan!

I also have a part in Enigma Variations coming, which is quite nice. Maybe because I might look quite mature on stage, some roles, for instance, those other fairies from The Sleeping Beauty, just wouldn't really suit me.

TBB: Mr. Clement Crisp praised your Winter Fairy as "opulent" in manner and he also admired you and Thiago Soares paired up in Manon. Why do you think these reviews were so extraordinary?

CC: That was amazing! I mean, Mr. Crisp is quite hard to please... Thiago is great to work with because he is so laid back and comfortable with what he is doing. And he has done the role many times before, so I felt comfortable doing the Mistress with him, he did help me a lot.

I've also had a lot of coaching from Monica Mason. Lescaut’s mistress was created for her so she knows it inside out and backwards. She understands the role as a character and therefore, she teaches you to project yourself, to portray the character how you want to. That was a turning point in my career so far: to have done that.

TBB: Who coached you for Lilac Fairy?

CC: That was Monica too. She doesn't coach everything, so I really appreciate it. I'm quite the technician, she makes me relax and become a bit more performance conscious. I also learned Winter Fairy from her. She's definitely helped me mature on stage.

Every day we are learning things about these roles and about ourselves. That's why people come and watch dancers like Tamara Rojo and Carlos Acosta, because they've been doing it for years and, even now, they are still adapting to what their bodies are saying. When somebody is playing a role for the first time, there are some things that come naturally and that's why they've been picked to do it.  But there are other aspects that you have to give yourself time to learn and the only way of learning is through doing it, even if you go there and you get slaughtered for it, you'll know what to do or not to do next time.

TBB: You mentioned Tamara and Carlos. Do you have any dancers you look up to?

CC: Dance wise, Marianela Nuñez is amazing. And in performance and acting, Tamara. When you watch her you see her whole career, every time you watch her dance, you see everything about her: what she's been through, the characters she has played, the similarities between some characters. She really is special.

TBB: How about choreographers that you really like to watch or work with?

CC: MacMillan because of the way he builds his characters. He makes them move in that “almost awkward” way to represent what they are like. Manon has her signature walk which really tells us something about her character. I've never worked with McGregor, but I think his choreography always looks amazing on the dancers... How he pulls it out from them! I also think Liam Scarlett is going to be big. You can pick at his brain all day and all these great things just seem to come out. And it feels nice to dance his work.

I haven't managed to see as much of other choreographers as I would probably have liked to. People like Forsythe and others that are just amazing. One of my friends just started at Rambert this year, so I hope I get to see them a bit more.

TBB: What are your dream roles?

CC: I would love to do Swan Lake because I think being able to play two characters in one ballet. And then also Manon and Juliet. I think I may be a better fit for say, Manon, rather than Juliet, but I've never portrayed a younger character. I think I could do it and I'd love to, plus Prokofiev’s music is lovely.

TBB: You have been getting bigger roles but you still have to do a lot of corps work at the moment. How do you cope mentally?

CC: It sounds very corny but, being in every performance - whatever I'm dancing - is what I want to be doing , I'm extremely happy to be doing varied roles but, if a casting goes up and you're not in something or covering someone, it is hard to deal with. You want to be there all the time. You want to be used and dancing: whether it is standing around the edge or in the middle.

TBB: Going back to The Sleeping Beauty, how do you negotiate those tricky Italian fouettés in the Lilac Fairy’s solo?

CC: It is a difficult step. My biggest memory of that first batch of shows was getting to that point and doing the first fouetté arabesque and seeing the wing full of people and the lights shining on all these heads and I was thinking “Oh my God! Stay calm, stay calm!". I knew that this was quite a big thing, but for me the secret is stamina. If you have the stamina to get through the full solo, you can deal with the little things that might not feel 100% perfect, but if you are tired, there's nothing you can do.

TBB: What would you say to someone who has never seen The Sleeping Beauty?

CC: They need to see it because for one, it's a famous fairy tale ballet and therefore, easy to follow. There is amazing dancing: the Rose Adagio, the fairy solos. It is not just about Aurora and the Prince, there are so many different characters and well-known solos like the Bluebird variation. That's why for me, the Lilac Fairy is important. She's the only one who in every single act, whether she is on for only two seconds or not. She is the story’s narrator, she knows what's going on and that everything will be fine, that Carabosse will not win. She knows the kingdom must go through the motions: that Aurora is going to prick her finger, fall asleep, that the Prince is going to come and that everyone is going to live happily ever after!

The Sleeping Beauty will be screened in cinemas internationally on 15 December 2011.

The Ballet Bag is an online resource for the best of ballet around the web: performances, companies, dancers, interviews and other websites. With the aim to “Give Ballet a New Spin” and make it more accessible, editors Emilia and Linda mash up dance content with pop culture. They use social media to network with dance fans, companies, performers, writers, bloggers, etc. sharing what’s good, fun and interesting in the balletsphere.