Alexander Whitley on being inspired by The Sleeping Beauty in one work, and using Xboxes in another 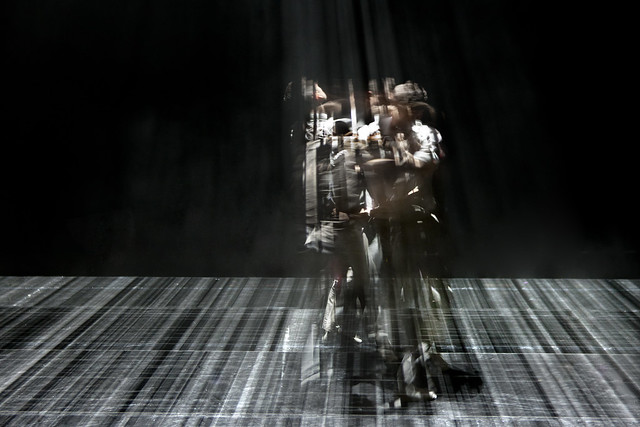 Alexander Whitley’s The Measures Taken opens in the Linbury Studio Theatre on 15 May.

His latest programme includes the world premiere of All That Is Solid Melts Into Air, a piece he began working on during Draft Works last year. The title of the piece references Marshall Berman’s book of the same name, which explores modernism and its effect on community and culture.

‘I want to explore the pursuit of perfection in classical ballet, contrasted with the failure of that attempt to reach it,’ says Alex. ‘The third movement references The Sleeping Beauty’, says Alex. ‘For example, the first step in the third movement is from the famous Rose Adagio. However, each time the characters attempt a classical pose, they fail.

‘Similarly, I have chosen three archetypal balletic characters: a prince, a princess, and a jester. When they all perform together in the second movement, there is a sense of it being bit strange and awkward: the jester is the spanner in the works between the prince and princess.’

Performed by Royal Ballet dancers Eric Underwood, Melissa Hamilton and Marcelino Sambé, All That Is Solid Melts Into Air is set to Bow to String by Icelandic composer Daniel Bjarnason.

‘There is a powerful undercurrent of dramatic tension in this music and a kind of darkness that appeals to me,’ says Alex. ‘Even when I heard it for the first time, there was a clear character to each act - each has a very tangible sense.

‘The first movement, Sorrow Conquers Joy, is a solo for Marcelino. Marcelino’s character is a jester or a fool, but there is an underlying sadness to him; his solo has a crazy, hectic madness, interspersed with quiet, lamenting passages. In contrast, the third movement, a pas de deux with Eric and Melissa, is very tender and moving.’

The titular work of the programme, The Measure's Taken, is performed by the five dancers of Alex’s company and set to music by electronic sound artist Rutger Zuydervelt. A collaboration with visual artists Marshmallow Laser Feast, it had its world premiere at the EXIT festival in France this April.

The piece explores society’s relationship with technology and how it affects our interaction and self-image.

‘The dancers and visuals explore the intimate relationship we have with technology, and the link between technology and power,’ says Alex. ‘In particular, I allude to the idea of surveillance and the effect an objectifying system of power has in shaping our self-image.’

Particularly intriguing is Alex and Marshmallow Laser Feast's use of games-console technology to allow visual projections to relate to the movement on-stage.

‘We are using bespoke software similar to that used by games consoles to track the movements of the dancers and then inform the visuals. Essentially, we have eight Xbox Kinects around the stage that use infra-red light to pick up the shapes of the dancers. It has been a long-time in development due to practical and logistical considerations!’

The Measures Taken runs from 15 to 16 May 2014. The production is sold-out but returns may become available.