From the Queen of the Night to Turandot by way of Norma and Brünnhilde, we round up some of opera’s most devilishly difficult soprano roles. 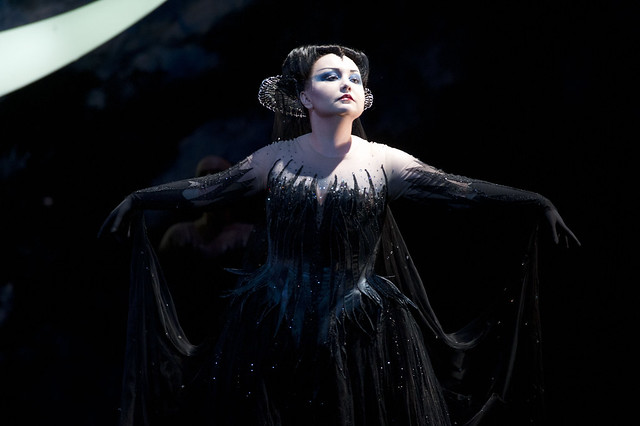 Albina Shagimuratova as the Queen of the Night in Die Zauberflöte, The Royal Opera © ROH/Mike Hoban, 2013

Is there any limit to what a great soprano can do? There’s a host of roles that astonish and delight us: true showcases of extraordinary musical and dramatic talent from across the history of opera. We’ve gathered together some of our favourites, starting with…

The Queen of the Night – Mozart’s Die Zauberflöte

Mozart wrote the role of the Queen in The Magic Flute for his sister-in-law Josepha Hofer, who was famous for her outstanding vocal technique and high notes. The Queen of the Night’s two dramatic arias are accordingly packed with fiendish coloratura, taking the soprano voice to amazing heights, particularly in the Act II aria ‘Der Hölle Rache’.

Elena is one of several roles that Rossini wrote for his first wife Isabella Colbran. Colbran had an exceptionally wide vocal range and the writing for Elena spans the gamut. The opera culminates in one of Rossini’s greatest showpieces for the female voice: Elena’s virtuoso Act II aria ‘Tanti affetti’.

Norma requires immense stamina, vocal agility and (particularly for the aria ‘Casta diva’) lyricism and beauty of tone. But the challenges don’t stop there: the singer also has to convey the varied and intense emotions of a heroine torn between religious devotion and jealousy, romantic passion and maternal love.

Lucia is another role that makes huge demands on a soprano’s stamina: she has to retain enough energy through the demands of Acts I and II in order to carry off Act III’s famous mad scene – a breathtaking display containing a stratospheric virtuoso cadenza accompanied by glass harmonica.

Abigaille is a notoriously difficult part: it calls for a singer with a powerful, very agile voice who can move from the bottom to the very top of her range at great speed. Even the most lyrical of Abigaille’s arias, ‘Anch’io dischiuso un giorno’, includes a thrilling two-octave leap.

Brünnhilde is often seen as a dramatic soprano’s ultimate challenge. She must sound equally comfortable in the high notes of her opening war cry in Die Walküre and in the low-lying passages that punctuate Götterdämmerung. She must be heroic and tender, vengeful and noble. And above all, she must have the stamina to sing in three operas, each more than five hours long!

Olympia the doll is only on stage for about half an hour, and for much of that time simply says ‘oui’. But her one aria ‘Les oiseaux dans la charmille’ is a virtuoso tour de force, each verse adorned with ever more elaborate coloratura. The part also calls for comic acting: Olympia’s mechanics periodically run down and stop her mid-flow.

At 90 minutes, Elektra is relatively short role – but it’s fiercely difficult. The singer has to project over a vast, intricately-scored orchestra and sing some of the most dramatic, declamatory music ever written for soprano, while also conveying lyrical tenderness in her reunion scene with Orest. She also needs to retain enough physical energy for the dance which brings the opera to its devastating close.

Like Elektra, Turandot requires a powerful high voice and a singer able to execute very declamatory vocal writing with ease. The role also poses dramatic challenges: how can a soprano make this murderous princess sympathetic enough to convince us she deserves a happy ending?

This near-impossible part requires a singer with a three-octave range who can shift from intense lyricism to flamboyant high coloratura to speech – sometimes within the space of one aria. The character is also dramatically deeply enigmatic, and is onstage for every scene of this four-hour opera.

Possibly the highest role ever written for soprano, Adès’s ‘airy spirit’ enters The Tempest singing 17 full-voiced Es two and a bit octaves above middle C – and continues in a similar range for most of the opera. The high notes aren’t limited to coloratura either: many of them are in slow and sustained passages, which is fiendishly challenging.

Which fiendishly difficult roles would you include?
Let us know in the comments below.

This article has 61 comments