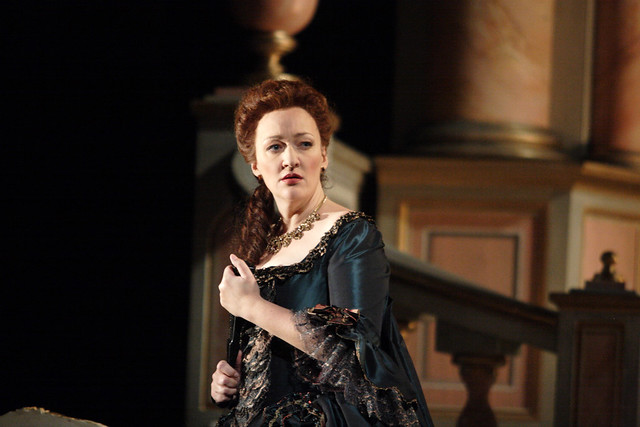 ‘Acerba voluttà, dolce tortura’ is an aria from Francesco Cilea’s 1902 opera Adriana Lecouvreur. It introduces us to the Princesse de Bouillon, the about-to-be discarded lover of the opera’s hero Maurizio. This is one of Italian opera’s most vivid depictions of tormented passion, and also a rare example of a mezzo-soprano showpiece aria in fin de siècle Italian opera.

‘Acerba voluttà’ opens Act II of Adriana Lecouvreur. The married Princesse de Bouillon has arranged a secret meeting with Maurizio at the villa of her husband’s actress-lover, Mademoiselle Duclos. As she waits for her lover, she gives vent to her troubled emotions. She would be still more troubled were she to know that her husband – who jealously believes the rendezvous to be between Duclos and her new lover – is on his way to the very same villa with the actors of the Comédie Française.

What do the lyrics mean?

The Princess first expresses her conflicting feelings: she luxuriates in her love, but is tormented by her lover’s absence and doubts his fidelity. She then anxiously anticipates Maurizio’s appearance, and imagines that he has arrived, only to realize that all she has heard is the wind in the trees by the river. Finally, she prays to the star of the orient to shine and bring her Maurizio – if he has remained faithful.

While Adriana made a serene Act I entrance celebrating her art in ‘Io son l’umile ancella’, Cilea introduces the Princesse de Bouillon to us as a very different woman, emotionally volatile and entirely focussed on romantic passion. The ferocious first section of her aria, with its agitated orchestral introduction, fortissimo (loud) opening vocal outburst, dramatic forays into the chest register and slow crescendo to a climactic high phrase on the words ‘eternity is measured in moments!’ is histrionic, almost obsessively self-focussed. And yet the Princess is also vulnerable: the quiet, delicately textured music as she imagines Maurizio approaching conveys tenderness and girlish excitement. Moreover, the dreamy lyricism of her prayer to the evening star (the aria proper; the material up to this point is arioso, between song and recitative) makes us feel her love for Maurizio is sincere, even if the dramatic, richly scored climax as she soars to the vocal heights and the ferocious fanfare-like orchestral postlude have a menacingly imperious air. The Princesse de Bouillon is Adriana Lecouvreur’s villainess, but by depicting her romantic sufferings so vividly, Cilea invites us to sympathize with her even as we fear her ferocity.

The opera’s best-known highlights are Adriana’s two great arias: the radiant ‘Io son l’umile ancella’ in Act I and Act IV’s melancholy ‘Poveri fiori’. Both are beautiful – as are Maurizio’s arias, particularly Act I’s romantic ‘La dolcissima effigie’ and Act III’s swaggering ‘Il russo Mèncikoff’. And Michonnet’s Act I monologue, as he watches Adriana act, is one of opera’s greatest depictions of unrequited love. But there’s much more to Adriana Lecouvreur than arias. Particularly strong are its scenes depicting the world of theatre: the busy preparations of the Comédie Française team that open Act I; the charming neoclassical ballet on the Judgement of Paris in Act III; and Adriana’s chilling monologue, using melodrama (speech over orchestral music), that closes Act III. One mustn’t forget either the almost unbearably poignant end to Act IV, as Adriana hallucinates she is the Muse of Tragedy before she dies.

Although performances of Adriana Lecouvreur were relatively rare until recently, several recordings exist due to the popularity of the title role with sopranos. James Levine’s 1977 Sony recording has the dream team of Renata Scotto, Plácido Domingo, Elena Obraztsova and Sherrill Milnes in the principal roles. Alternatively, Decca offers a recording with another great soprano – Renata Tebaldi – and star mezzo-soprano Giulietta Simionato as the rivals for Mario del Monaco’s Maurizio. Simoniato can also be heard on a 1959 recording re-released by Opera d’Oro with Magda Olivero in one of her favourite roles as Adriana and Franco Corelli as Maurizio. Among DVDs, particularly noteworthy versions include a 1976 production with Montserrat Caballé and José Carreras, a 1989 version from La Scala with the great soprano Mirella Freni as Adriana, and The Royal Opera’s very own David McVicar production, with Angela Gheorghiu and Jonas Kaufmann as the ill-starred lovers.

Cilea’s best-known work aside from Adriana Lecouvreur was the opera L’arlesiana, with its beautiful ‘Lamento di Federico’ (a favourite among tenors). Otherwise his output was relatively small, though die-hard fans can find recordings of his piano and chamber music. Among Italian operas of the same period, Giordano’s French Revolution opera Andrea Chénier is an absolute must for fans of Adriana – its musical style strongly influenced Cilea – while Puccini’s Tosca likewise features a strong, performing-artist heroine. Mascagni’s Cavalleria rusticana and Leoncavallo’s Pagliacci offer interesting contrasts and similarities to Adriana in terms of style and dramatic content. And listeners keen to explore fin de siècle Italian opera further will enjoy the discs of verismo arias released by Anna Netrebko, Jonas Kaufmann and Renée Fleming, among others, and maybe also recordings of relative rarities such as Giordano’s Fedora or Zandonai’s Francesca da Rimini.

The production is a co-production with Gran Teatre del Liceu, Barcelona, Vienna State Opera, San Francisco Opera and Opéra National de Paris, and is given with generous philanthropic support from The Friends of Covent Garden.