A turning point in opera: Rossini and Guillaume Tell

Rossini made historic developments in his final opera, which precursed the tropes of modern film directors and ushered in a whole new genre. 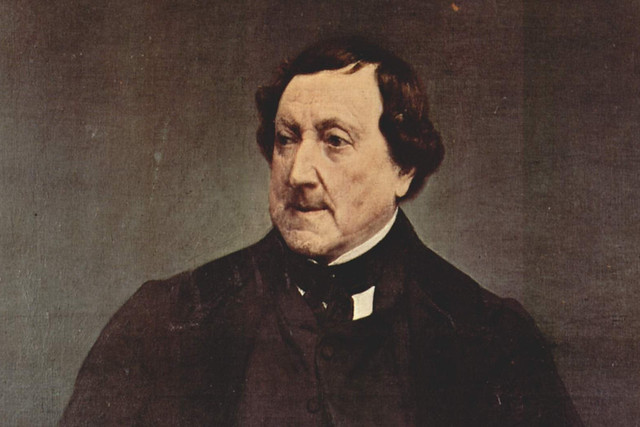 At the heart of Guillaume Tell, a work characterized by almost constant activity, action and movement, is a short arioso passage in which absolute stillness becomes a matter of life and death. In ‘Sois immobile’, Guillaume Tell, compelled to shoot an apple from his son Jemmy’s head, tells the boy to go down on one knee, keep absolutely still and on no account to look at his crossbow.

Embedded in the Act III finale, this compelling piece of musical drama is the kernel of the Tell legend. But as the nearest thing Tell gets to an aria, it is striking that ‘Sois immobile’ does not, despite its extraordinarily affecting quality, foreground his inner emotional state. Instead, it elaborates a primarily physical drama – of tensed muscles, taut bowstrings and bolts in flight – and the whole scene is couched in bodily terms (‘avert your eyes’, ‘don’t move a muscle’), rather than the language of emotions that might have been typical of operas a generation earlier.

Rossini’s career bridged two very different operatic paradigms: the classical opera seria of the 18th century and the 19th-century forms of (in Italy) Romantic opera and (in France) the grand opera tradition that Guillaume Tell inaugurates. In opera seria as perfected in the works of the librettist Metastasio, characters’ emotions formed the subject of arias set apart from the recitative-based action as lyrical ‘frozen moments’. While this classical opera seria structure can clearly be seen in Rossini’s first two ‘mature’ operas – Tancredi and Aureliano in Palmira, both 1813 – his tendency subsequently was to undermine this structural segregation of drama from lyric song. In Guillaume Tell this tendency yields a radical reduction in the amount and scope of solo singing; the unprecedented importance accorded to the chorus; and the thoroughgoing manner in which lyric song is folded into the action.

The opera’s characters are subjected to the impersonal forces of history and nature, to physical dangers beyond the individual’s control. This danger manifests itself in the qualities of urgency and suspense, aesthetic properties that were quite alien to opera seria, with its emphasis on the rational and humanistic values of the 18th century. The 19th-century awareness of the fragility of the individual in the face of historical and natural forces meant that the representation of imminent physical danger constituted an increasingly important element in popular theatrical genres.

Guillaume Tell makes a feature of such representations of physical peril, all of which involve Tell as protagonist. The natural dangers of the Swiss Alps play an important role, for instance, in Tell’s skin-of-the-teeth escape from Gesler’s men in Act I, when he ferries the hunted Leuthold over a raging torrent to safety. The alpine storm in the Act IV finale again allows Tell to demonstrate his seamanship, saving himself and his captors from the breaking storm, before he evades them once again.

Modern cinema-going audiences, accustomed to the sophisticated narrative techniques available to the modern film director, may well struggle to grasp just how thrilling Guillaume Tell’s action scenes would have seemed at the Paris Opéra in 1829. Combining a pervasive sense of physical peril with the full symphonic and choral means at his disposal, at such moments, Rossini developed a brand of musical drama that possesses an immediacy and directness quite different – and indeed, more distinctively modern – than anything previously seen on the operatic stage.

This is an edited extract from Martin Deasy’s article ‘The Drama of Rossini’ in The Royal Opera’s programme book, available during performances and from the ROH Shop.

Find out more about Rossini’s developments in Guillaume Tell through blogs from musicologist Sarah Hibberd, writer in residence with The Royal Opera.