Inspired by Der fliegende Holländer, we take a look at a selection of other ghostly operatic favourites.

With Halloween just around the corner and Tim Albery's Der fliegende Holländer opening this week, there’s a definite ghostly chill in the air at the moment. We take a look at a selection of supernatural operas… 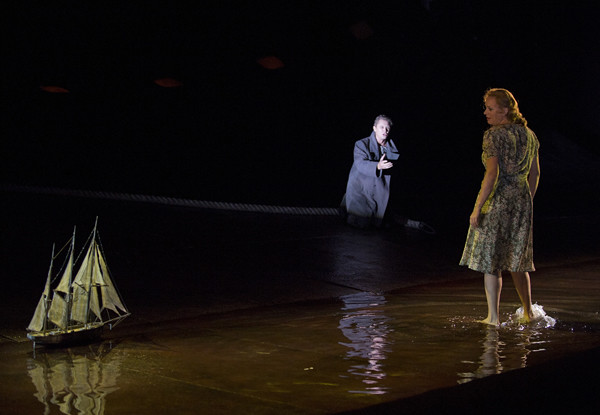 Don Giovanni - a work described by Charles Gounod as ‘an unequalled and immortal masterpiece’ and by Hector Berlioz as ‘exceptionally great art’ – features one of the most famous spectres in opera: the Commendatore, who is killed by Don Giovanni in the first scene of the opera. The Commendatore’s daughter Donna Anna and her fiancé Don Ottavio swear vengeance on the murderer, but in the end it is the murdered man himself who exacts retribution. In the penultimate scene, the Commendatore comes to seek out Don Giovanni and to urge him to repent his disgraceful conduct. When Don Giovanni disdainfully refuses, the Commendatore drags him down through flames into Hell.

Although Bellini’s La sonnambula (which opens at the Royal Opera House in November) isn’t actually about the supernatural, there’s a great deal of talk of ghosts throughout the work: the villagers have mistaken the sleepwalking Amina, in her white nightgown, as a phantom. It's only when everyone sees her in action that they realize who the figure dressed in white wandering the village at night really is.

In Verdi’s first setting of Shakespeare, the murderous Macbeth is haunted twice by his friend Banquo, who he has assassinated following a prophecy by witches that Banquo’s children will be kings. On the first occasion, Banquo appears at a banquet given by Macbeth and Lady Macbeth, causing Macbeth to rave in fear, to the consternation of his guests. Macbeth sees Banquo’s ghost a second time during his second visit to the witches, who show him a ghostly procession of kings: Banquo and his descendants. Macbeth collapses in terror. At the end of the opera, another of the witches’ prophecies comes true when Macbeth is slain by Macduff.

Ghosts play a major part in Berlioz’s epic opera, which opens at the Royal Opera House in June. In Part I, the ghost of the Trojan prince Hector warns first the prophetess Cassandre and then the Trojan hero Enée of the destruction of Troy. Hector then orders Enée to travel to Italy and there found the Roman Empire. In Part II, Enée, weary from much travelling, arrives in Carthage and falls in love with the queen of Carthage, Didon. Enée plans to marry her, but the ghosts of Cassandre, Hector, Priam and the Asian prince Chorèbe urge him to continue his journey to Italy. Enée obeys, and Didon commits suicide.

The Queen of Spades

The obsessive gambler Gherman pursues and hounds a mysterious elderly countess who is reputed to know an infallible way to win at cards. She dies when he threatens her with a revolver – however, later than evening, her ghost returns and tells Gherman the secret of the cards. The secret comes at a heavy price. Gherman loses his beloved Liza (who kills herself in despair at his obsession), and goes mad when, during an intense evening of gambling, he draws the card of the Queen of Spades. Believing that the Countess’s ghost is pursuing him, he commits suicide.

Alban Berg’s heroine Lulu marries three times: her first husband dies of a heart attack on seeing her with another man, the second commits suicide on hearing that Lulu has been unfaithful, and the third is shot by Lulu. In the final act of the opera, Lulu, who has lost everything and is now a prostitute, receives three mysterious visitors, each of whom bears a strange resemblance, musically and physically, to each of her husbands (they are played by the same singers). The final visitor, who represents the husband that Lulu shot, kills her.

The Turn of the Screw

One of the most famous ghostly operas of all time, Britten’s The Turn of the Screw is based on an eerie novella by Henry James, about two children, Flora and Miles, who are haunted by the spirits of their former tutor and governess. Their current governess attempts to protect them – with ultimately tragic consequences. While James maintains a certain level of ambiguity as to whether the children are really haunted or whether the ghosts only exist in the fevered imagination of their current governess, Britten makes it fairly clear that the ghosts do exist and that both children are to some extent possessed by them. The eerie score, for chamber ensemble, includes versions of two nursery rhymes: ‘Tom, Tom, the Piper’s Son’ and ‘Lavender’s Blue’, and Britten makes use of the high range in the tenor voice to create a particularly frightening ghost in Peter Quint, Miles’s former tutor.

What are your favourite ghostly operas? Tell us via the comment below...