A tailor-made trio of operas

From The Minotaur to Anna Nicole: some recent role creations in Royal Opera commissions. 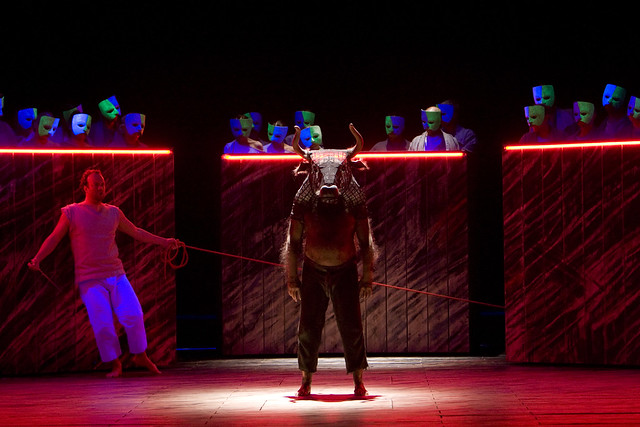 Composers have often written roles with particular singers in mind. Mozart wrote the stratospherically high part of Die Zauberflöte's Queen of the Night for his sister-in-law Josepha Hofer; Rossini wrote many virtuosic high mezzo-soprano roles such as Elena in La donna del lago for his mistress (later wife) Isabella Colbran; and Britten’s great tenor roles were all inspired by the unique voice of his partner Peter Pears.

We thought we'd take a look at some examples of recent Royal Opera commissions with roles written for specific singers:

Harrison Birtwistle - Gawain and The Minotaur
The roles of Green Knight (Gawain) and Minotaur (The Minotaur) were created for John Tomlinson.

Harrison Birtwistle and John Tomlinson first worked together when Tomlinson recorded the role of the Doctor in Birtwistle’s Punch and Judy in 1979. When The Royal Opera commissioned Birtwistle to write Gawain, which premiered 12 years later, Birtwistle wrote the role of the majestic Green Knight specifically for Tomlinson. He modelled the character’s vocal range on that of Wotan in Wagner's Ring Cycle, the role in which Tomlinson had made his Bayreuth Festival debut to great acclaim in 1988.

When Birtwistle was commissioned to write a second work for The Royal Opera, he chose the Greek myth of the Minotaur. From the start he envisaged the central role of the half-man, half-bull as being sung by Tomlinson, telling his publisher Boosey and Hawkes that "imagining John Tomlinson on stage in the lead role was integral to the whole project". David Harsent, Birtwistle’s librettist, agreed, noting that he had Tomlinson’s voice in mind when he wrote the libretto. Birtwistle based the vocal range and style of the Minotaur on another great Tomlinson Wagner role, Hagen in Götterdämmerung (which Tomlinson has sung many times for The Royal Opera). John Tomlinson was thrilled with the role of the Minotaur, telling MusicWeb that "the music was superb… it was perfect for me. There was a wonderful use of my bass voice with those haunting monologues and then the dramatic stuff in the public scenes".

Thomas Adès - The Tempest
The role of Prospero was created for Simon Keenlyside, and the role of Ariel for Cyndia Sieden.

Thomas Adès in his first Royal Opera commission created the central role of Prospero for British baritone Simon Keenlyside. Adès envisaged Prospero as a young, vigorous man rather than an elderly magician, and chose Keenlyside not only for his vocal gifts but also for his skill as a physical actor. Adès also wrote the spectacularly high and virtuosic role of the spirit Ariel for the American coloratura soprano Cyndia Sieden. The part is one of the hardest written for soprano: it ranges higher than the Queen of the Night in Die Zauberflöte, and the singer has to sing 17 high Es in the first few minutes of her first scene. Not surprisingly, Sieden is one of the few singers who can perform the role of Ariel (her singing at the world premiere of The Tempest was described as ‘almost out of this world’ by the Guardian. She has sung the part in four different productions of the opera.

Other singers in the world premiere cast of The Tempest may have influenced Adès’s writing. For example, Adès’s first Caliban was the British lyric tenor Ian Bostridge, whose particular vocal quality suits Adès’s concept of the role, more wistful and lyrical than Shakespeare’s original.

Mark-Anthony Turnage - Anna Nicole
The role of Anna Nicole was created for Eva-Maria Westbroek, and the role of the Lawyer Stern for Gerald Finley.

Eva-Maria Westbroek was recruited for the role of Playboy model Anna Nicole by the director Richard Jones, who’d worked with her on Lady Macbeth of Mtsensk for The Royal Opera in 2006 and been very impressed by her vocal and dramatic skills. When Jones was booked to direct Anna Nicole, he immediately thought of Westbroek for the title role. As she told Musical Criticism: "I was in a record shop in London… and bumped into Richard! He said, 'we want you for this opera written by Turnage.'" Westbroek went on to work extensively with composer Mark-Anthony Turnage and his librettist Richard Thomas as they created the opera. Westbroek enjoyed the challenges of the role (including some flamboyant coloratura for Anna Nicole’s drug-fuelled rage in Act II) and later told the Independent: "this creative experience was one of the most exciting things I’ve ever been part of." Turnage stressed the importance of both Westbroek and Gerald Finley (who played Anna’s lover, Lawyer Stern) in his compositional process, telling Boosey and Hawkes "I had the voices of Eva-Maria Westbroek and Gerald Finley in my head from the start".

The Minotaur returns to The Royal Opera from 17 - 28 January 2013. Tickets are still available.