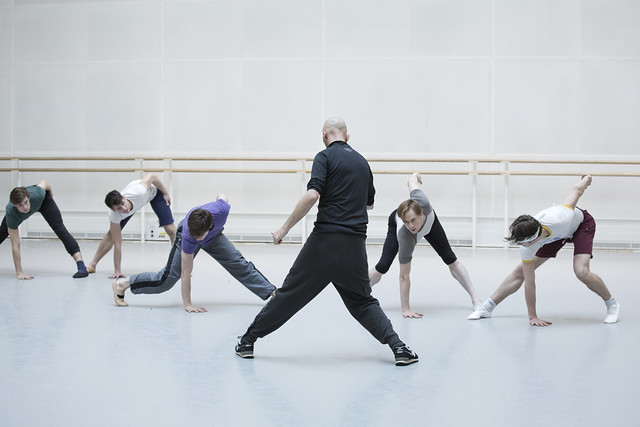 Wayne McGregor is one of the biggest names in dance. Autumn 2016 marks his tenth anniversary as Resident Choreographer of The Royal Ballet; his own company Studio Wayne McGregor continues to go from strength to strength; and he is a familiar figure at leading dance companies around the world. The choreographer is a busy man. And yet one thing he always has time for is mentoring – encouraging and championing the next generation of dancemakers:

‘It excites him to see other people develop as much as making his own work’, says Freddie Opoku-Addaie, who first worked with McGregor as a student. ‘He’s always been generous. After nearly twenty years he’s still at hand, encouraging me to push for more from my creative potential. That kind of support is invaluable.’ Freddie's sentiment is echoed by Eleesha Drennan, who has worked with McGregor since winning the Sky Academy Arts Scholarship in 2014. ‘His time is very valuable and yet he always seems to make time for you. I don’t know how he does it.’

Robert Binet’s relationship with McGregor began in 2011 and he treasures the advice and support McGregor has given. ‘I got skills and tools from Wayne that completely changed my ideas about choreography and what I wanted’, he says, adding, ‘It’s a bit hard to fathom how my career would have gone without him’. Charlotte Edmonds, the inaugural member of the Royal Ballet Young Choreographer Programme, recalls her first meeting with McGregor: ‘He’s such an iconic figure and I was 16 or 17, on my first job at the Royal Opera House and incredibly nervous. It was really reassuring to discover that he is so open and approachable. He has so much interest in helping younger artists and younger choreographers.’

For Drennan, ‘the way Wayne mentors is about empowering and liberating an individual artist to find their own way, and by backing and supporting them. He’s really able to see when there’s an authentic voice behind someone’s work, and he’s incredibly good at encouraging you to follow that voice’. This combination of support coupled with a drive to hone an artist’s vision is something that all four choreographers celebrate. Binet recalls his first project with Wayne and being taken completely out of his comfort zone, choreographing on contemporary dancers having come from an exclusively ballet background. ‘Choreography is such an individual thing – there aren’t equations you can learn’, he explains. ‘I think Wayne navigates that line very well. He’ll give you the question and the possibility but he’ll never answer it for you. He always leaves you to solve it, which teaches you so much. And makes you your own artist.’

McGregor is famed in his own work for finding collaborators beyond the world of dance and for bringing diverse creative voices together in one work – as Opoku-Addaie says, ‘You talk about artists pushing boundaries and Wayne does that’. It’s something he’s shared with those he teaches; as Edmonds confirms, ‘By challenging me intellectually and getting me to explore my perceptions of what choreography is, he’s helped me gain the confidence to expand my horizons, in terms of what might be possible as a choreographer. He’s been very generous, not only in sharing his expertise but in pointing me towards others who can support my development and my growth’.

Something all these choreographers value is the personal support McGregor provides. 'It’s part of my job as an artist to question everything, and it’s hard’, says Drennan. ‘To have someone of his calibre, and for whom I have so much respect, be behind you is the most incredible thing.’ But as Opoku-Addaie explains, McGregor’s influence goes far beyond the individual. He points to Studio Wayne McGregor’s plans to provide studio spaces for emerging choreographers: ‘Dance is one of the most expensive art forms there is, in terms of the time to train the body and the resources needed. Providing free space to create already speaks volumes about how he wants to support others and the sector. And that’s also mentorship. These things really help.’

Choreography is an art form that must be learnt through practice – making the value of mentors who can nurture and guide a creative vision all the more important. As Binet summarizes, ‘With choreography you are expected just to do it, to learn it on the fly. So having someone who is at the peak of his career and has the desire to teach and share their knowledge is such a rare and incredible gift.’