Little Bulb Theatre’s music director Dominic Conway talks about his love of Django and the challenges of representing two musical virtuosos at once. 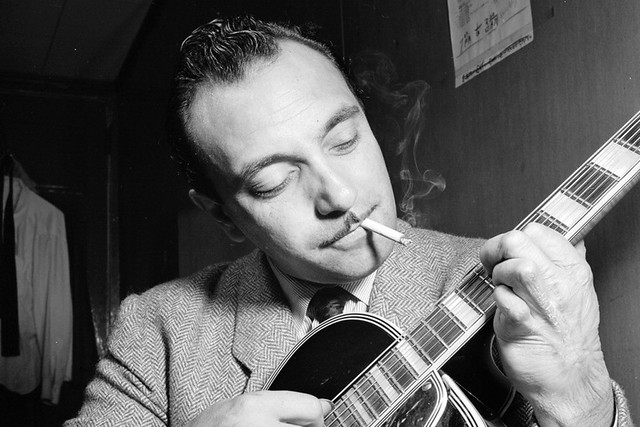 Previously Little Bulb Theatre has developed shows from original stories. Why did you decide to adapt the Orpheus tale?
Orpheus seemed the natural choice because it’s a story about music and about the power of music – I guess that’s probably what attracts everyone to it. Alex [Scott, director] had a key moment when the penny dropped while he was on holiday in Spain and saw a flamenco guitarist and singer. The venue was full of local Spanish ladies who were swooning over this virtuosic, passionate flamenco music – these men were becoming Orphic figures because they were so good, so passionate. The women were crying, clutching their hearts. Alex thought isn’t this amazing, the figure of a musician who has this incredible direct power. We were really interested in the persona of musicians, and also in lampooning the status that comes with it – how it’s amazing to have someone who can fit that elevated position, but also how it’s quite funny that they think a lot of themselves.

In your version you merge Orpheus with a real-life legendary musician, the 1930s jazz guitar virtuoso Django Reinhardt.
I’ve always been a big fan of Django and I once said to Alex that in ten years’ time we should do a biopic of Django, and we can all take five years off and just practice. He came back from this holiday and said we should do Orpheus, and you should play Django being Orpheus. I just totally panicked – I thought it was a terrible idea! But Alex is a good barometer of what an audience will get out of something, and the Orpheus story is so irresistible that we could do so much with it.

Gypsy jazz – what we call Django’s style now – has a very specific technique. I had to unlearn loads of habits when I started: what type of pick to use, what type of guitar, how to hold the pick and the guitar, the voicings, the rhythmic emphasis… I’m just starting to get the hang of it now.

So we decided early on that our version would involve Django Reinhardt. A big thing then was imagining this situation in 1930s Paris where an opera company has splurged its entire budget getting Django to play the title role, and then found him to be a bit unpredictable. And so we were thinking of a hapless director wrestling with this gypsy musician and what he would and wouldn’t do. We thought about ending with Orpheus’ decapitation, as in Ovid’s Metamorphosis, but in the end we decided Django probably would have vetoed that!

You’ve used a lot of Django’s music in the show.
Playing Django Reinhardt’s music is such a great pleasure, an amazing experience. It has a kind of cheeky energy to it, and great depth as well. The music’s always evolving. He has endless ideas and always finds ways of teasing out something exciting in a song – he brought such an emotional strand out of the guitar.

By no means do I think his virtuosity is the best thing about him, but he can do things which are just breathtaking. He’ll be playing these beautiful melodies and then his virtuosity allows him to produce all these different sounds. They say that he played guitar with a human voice – it feels very talkative and I think that’s quite rare for the guitar, to bring out so much personality. He’s using advanced techniques in a really expressive, emotional way.

But you’ve drawn on a lot of other musical sources as well, particularly in classical music.
We wanted to use classical music because it’s such a powerful form, and it was music that Django was really passionate about. There are these recordings of Django playing Bach, and he’s absolutely swinging it in the most incredible way – it was something we wanted to mimic really early on. The final score has a lot of classical composers, such as Saint-Saëns, Debussy and Bach. The Monteverdi in particular seems so perfect. We used ‘Dal moi permesso’ from the prologue, it really excited us as a piece of music. Within the show the women sing it, then I do a guitar version of the harpsichord accompaniment, and then we bring in the rest of the band and then we swing it.