A guide to Lieder: Operas in miniature

In preparation for Jonas Kaufmann's recital of Winterreise on the main stage, we look at the history of this exquisite art form. 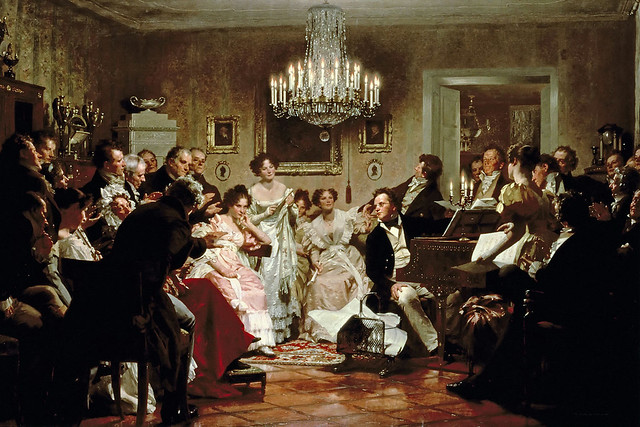 Lied (plural Lieder) simply means 'song'. But the word connotes a genre of music in which the operatic is made miniature, told through the intimate forces of voice and piano. Its combination of epic and domestic, high art and universal emotions, is for many a perfect distillation of 19th-century thought and the philosophy of the Romantics.

As such, the Lied's genesis has inspired a degree of myth-making. The genre has even had bestowed upon it a specific birth date – 19 October 1814, the day Franz Schubert composed Gretchen am Spinnrade (Gretchen at the spinning wheel). This notion of a 'Eureka' moment obscures much: the handful of songs commonly considered Lieder by 18th-century composers, such as Haydn and Mozart; textual evidence that suggests the primacy of song in German thought from at least the 1740s; and, perhaps most grievously, the significance of Beethoven's exquisite song cycle An die ferne Geliebte (To the distant beloved). And yet that date has its allure, in the emphasis it places on two key figures – Schubert and Goethe.

The Lied begins with Goethe, and the lyric renaissance in German poetry that occurred over the second half of the 18th century. Goethe and others of his era looked to folksong. They incorporated folkish, natural elements such as short lines and strophic structures in poetry that also drew on sophisticated Classical devices and post-Enlightenment thought. The product was a body of poetry at once simple and complex, accessible and rarefied, familiar and yet novel. It found a ready audience in an educated middle class nostalgic for the past.

In 1809 Goethe expressed his belief that lyric poetry could only be completed through music setting: 'Only then is the poetic inspiration… sublimated (or rather fused) into the free and beautiful element of sensory experience… [and] we think and feel at the same time'. Schubert was the first to realize this belief. He went far beyond the sensitive word-setting and atmospheric accompaniment of earlier song composers. In his mature work – from Gretchen on – he fused music and text to create Lieder that transformed the poetry he used into a new art form, and encapsulated in each Lied a unique world.

Schubert took advantage of recent technical developments in the piano to create an astonishing variety of textures, compressing an orchestra down into just one instrument. He used this rich language to powerful expressive effect, often with imaginative motifs that immediately suggested images of the text – such as the continual spinning motion of Gretchen am Spinnrade, or the thundering hooves in Erlkönig (Erlking). He made these motifs crucial structural elements, infusing the Lied with his passionate response to the poem. Largely syllabic settings allowed the poetry to be strongly declaimed, and emphasized the synthesis of words and music – while often through-composed music added a further dimension to principally strophic poetry. From songs of less than a minute through to his great song cycles – Die schöne Müllerin (The beautiful miller-maid), Winterreise (Winter journey) and Schwanengesang (Swansong) – he created works of great beauty and dramatic power.

Schubert's Lieder found popularity with the same middle class, who now brought pianos into their homes. In Schubertiade evenings, his Lieder were celebrated, either in large gatherings or by one individual alone with the piano. Schubert’s well over six hundred Lieder (an astonishing number given his short life) engendered the genre in which the popular and the individual were both represented, and in which the drama and effects of opera were distilled into something that could be powerfully conveyed wherever the setting.

Jonas Kaufmann and Helmut Deutsch perform Schubert's Winterreise on the Royal Opera House main stage on 6 April 2014. Tickets are sold out, but returns may become available and there will be 67 day tickets on the day of the performance.