A glimpse into the archives: The surprising history of Shakespeare at the Royal Opera House

Many years before the RSC was established and Shakespeare's Globe was rebuilt, the Royal Opera House was an important hub for the Bard's work in London. 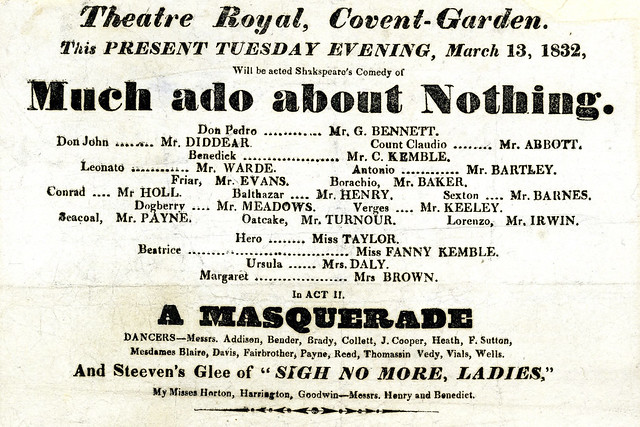 Part of a playbill for Much ado about Nothing performed at Theatre Royal Covent Garden, 13 March 1832. ROH Collections

From Otello to The Winter’s Tale, the Royal Opera House has a long and continuing tradition of performing operas and ballets inspired by Shakespeare. But his plays themselves have also played a part in our history. As we mark the 400th anniversary of Shakespeare’s death on 23 April 2016, ROH Collections has delved into the Royal Opera House archives to look at some of those early Shakespeare performances staged at Covent Garden.

Decades before the Royal Shakespeare Company was established — and centuries before the rebuilding of Shakespeare's Globe — the Theatre Royal, the first theatre on our Covent Garden site, opened its doors in 1732. It began life as a playhouse, staging a variety of entertainments including plays, pantomimes, dances and operas. Items from ROH Collections show that Shakespeare was an important part of this mix. We know that Romeo and Juliet was performed on 1 March 1750, while the earliest playbill in the ROH Collections for a Shakespeare play is for Henry V, on 3 December 1755.

Image of Charles Kemble, published by the Executers of the late F. Asperne. ROH Collections

Part of a playbill for Coriolanus performed at Theatre Royal Covent Garden, 23 May 1817. ROH Collections

Photograph of an invitation to a farewell dinner on the retirement of John Philip Kemble, 27 June 1817. ROH Collections

Playbill for Much ado about Nothing performed at Theatre Royal Covent Garden, 13 March 1832. ROH Collections

Part of a playbill for Much ado about Nothing performed at Theatre Royal Covent Garden, 13 March 1832. ROH Collections

Over the following century many more Shakespeare plays were staged, including The Merchant of Venice, The Merry Wives of Windsor, Twelfth Night, The Comedy of Errors and Much Ado About Nothing – suggesting Shakespeare was a staple at Covent Garden. In fact, it was a performance of Macbeth that opened the second theatre on 18 September 1809, after the original Theatre Royal was destroyed by fire the previous year. Actors in this production included John and Charles Kemble and their sister Sarah Siddons — all were regulars on the Covent Garden stage.

John Philip Kemble had won fame through his performances at the nearby Theatre Royal on Drury Lane, ever since Kemble’s critically acclaimed debut as Hamlet in 1783. John became manager at Covent Garden in 1803, again making his first appearance as Hamlet. Through to his final performance in 1817 he starred in many other Shakespeare plays, including Richard III, Henry VIII, The Tempest, King Lear, Coriolanus and King John. It was for his performances as Macbeth that he became best known, the part he played in the 1809 re-opening of the theatre.

John’s brother Charles took over as manager on John’s retirement, and remained in the post until 1832. He was also a well-known Shakespearian actor, performing many times alongside his brother as well as appearing in Othello and Romeo and Juliet. Sarah, the oldest of the Kemble siblings, was equally renowned, and was in fact the first of the family to perform at Covent Garden, playing Belvidera in Venice Preserved in February 1786. John, Charles, Sarah and a third brother, Stephen, regularly performed together at Covent Garden, most notably in Henry VIII. Charles’s daughter Fanny also graced the Covent Garden stage, often alongside her father.

In 1847 the theatre was renamed the Royal Italian Opera, and opera became its main focus. But that early history as a Shakespeare theatre, and the legacy of the Kembles, is continued on through the many Shakespeare-inspired operas and ballets that are key parts of the ROH repertory today.