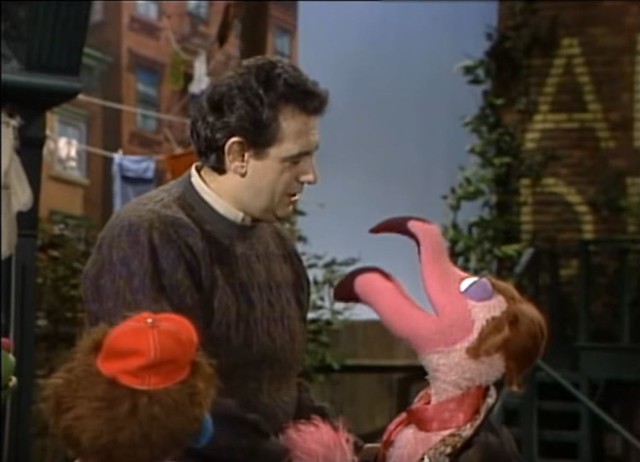 There are many great opera scenes in films but we shouldn't forget that the small screen has also produced its share of operatic moments. Whether it's deriving comedy from the at-times-bizarre rituals of opera-going, providing thematic commentary or just creating magic, the world's most intoxicating art form has appeared over the airwaves in all manner of guises:

This long-running cartoon is famous for its pop culture references and in the episode ‘Homer of Seville’, opera gets The Simpsons treatment. In a typically bizzare opening, Homer hurts his back falling into an open grave, and his cry of ‘D’oh!’ upon hearing the cost of the X-ray reveals a hidden operatic talent. Before he knows it he’s a famous opera star performing in La bohème at the Springfield Opera House (which is remarkably similar to a certain iconic opera house down under). The only catch is that Homer has to lie on his back when singing to hit the right notes.

This scene references the famous ascending shot in the Citizen Kane, however in this instance instead of stage hands it reveals Homer's pals Carl and Lenny complaining about their seats. Plácido Domingo, voiced by the great man himself, also makes a guest appearance encouraging Homer’s singing career in the 'locker room' and asking to be called P-Dingo (in a nod to the moniker of rapper Puff Daddy).

Daleks past and present return with a vengeance in the first episode of Series 7 of the BBC’s rebooted Doctor Who. This episode also introduces Oswin Oswald (Jenna Coleman), who in a future incarnation would become the Eleventh Doctor’s companion Clara Oswald, Oswin’s calling card being the Habanera from Bizet’s Carmen.

Oswin, a former Junior Entertainment Manager on the Alaska star liner, is stranded on a planet where damaged Daleks are herded to be exterminated. She has barricaded herself in her spaceship against the marauding Daleks keeping herself busy by cooking soufflés and listening to Carmen. While evidently the Daleks are not fans of opera, the Doctor recognises it immediately and it seems fitting that he calls her Carmen with her fiery red dress and sassy attitude.

Sesame Street introduced a whole generation of children to opera through the character of Placido Flamingo, a debonair tenor muppet – ‘the numero uno bird of opera’ – who regularly performed at the Nestropolitan Opera. Flamingo enjoyed many moments in the spotlight including as soloist with the Animal orchestra conducted by Seiji Ozawa, a duet with Ernie, and performing a scene from ‘The Dentist of Seville’.

But Flamingo’s greatest moment was meeting his famous namesake Plácido Domingo in a special 20th anniversary episode. The two perform a duet of ‘Look through the window’ with muppets from all races and nationalities, proof of opera's power to unite. See if you can watch this clip and not break into a smile.

What do you do when you have free tickets to the opera, your girlfriend is running late and you feel uncomfortable in your ill-fitting tuxedo? If you’re George Costanza, you sell her ticket to a tout. In a classic Seinfeld episode where the irreverence shown to the high arts is only by topped by the time Jerry placed a PEZ dispenser on Elaine’s lap during a classical music concert, it’s opening night of Pagliacci and Kramer has free tickets.

Elaine’s new boyfriend ‘Joey’ has mysteriously started calling her Nedda. Kramer has told everyone to wear black tie but refused to dress up himself. Jerry is being stalked by 'Crazy' Joe Davola who is obsessed with Pagliacci and likes to go around dressed as a clown. In true Seinfeld style, storylines collide as the gang finally settle into their seats and George has been replaced by an overweight opera fan. But who did Kramer sell his spare ticket to?

Over 11 seasons of this Seattle-based sitcom, Frasier (Kelsey Grammer) and Niles Crane (David Hyde Pierce) were known for their enjoyment of the finer things in life, so naturally they would have subscription seats to the opera. However on Valentine’s Day things get nasty when both Frasier and Niles want to use their opera tickets to woo women.

When Frasier refuses to give up his opera ticket for Niles to have a date with his girlfriend, Niles threatens him with the most horrific fate one could possibly suffer at the opera: ‘May your box be filled with cellophane crinklers and the stage swarming with standbys!’. Unperturbed, Frasier drags his dad along to Rigoletto so he can pursue a fellow subscriber he’s had his eye on.

This odd couple’s night out presents many opportunities for digs at opera story lines (‘more goofy stuff that never happens in real life’) and in-jokes for the opera fans. But it is not only Frasier who ends up with a date, the indomitable Martin unwittingly finds himself the object of an opera lover’s affection...

Hannibal Lecter is well known in film, literature and television for his cannibalistic impulses so it's apt that the opera scene from TV episode ‘Sorbet’ exhibits a fascination with body parts. Beginning with a close-up of a quivering larynx, the camera follows the sound travelling from inside the human body past the uvula and tongue, making its way out through the singers’ mouth. The glorious sound of Cleopatra’s aria ‘Piangerò la sorte mia’ from Handel’s Guilio Cesare travels across the room into the ear canal of Dr Lecter (Mads Mikkelsen).

It is the first time in the series that Hannibal shows any emotion and proves that even a remorseless serial killer can be moved by opera. Or is he fearful of the notion that the dead can return to haunt their oppressors?

Hannibal is full of operatic moments punctuated with classical music. Each episode in Season 1 is named after a dish of French cuisine and this seventh episode of the series also reveals that Hannibal is a keen chef famed within opera-going crowds for his dinner parties. Unbeknownst to his guests, his speciality is meticulously prepared human offal.

Anyone who has ever battled to drag a reluctant spouse to the opera will sympathize with Susan (Zoë Wanamaker) in this episode of the British sitcom My Family. Susan has tickets to Don Giovanni but being the grumpy misanthrope that he is, Ben (Robert Lindsay) says he hates the opera, complaining that he never knows what’s going on and ‘it’s as boring as hell’. But Susan won’t be deterred, shrewdly presenting him with a vinyl and translated libretto of the opera so he can familiarize himself with the storyline before the performance.

Despite himself Ben slowly becomes absorbed in the world of the opera, discovering that a 17th century Italian opera can in fact pertain to his own life as he realizes he has set up his daughter on a date with a modern day Don Giovanni.

In his five-part television mini-series about a tenacious mother and her bratty, narcissistic daughter set during the Great Depression, director Todd Haynes indulges in his favourite genre – melodrama. Operatic in its pace, themes and length, Mildred Pierce also includes a number of wonderful operatic moments.

Always knowing she had a hidden talent that would help her rise above the humdrum, Veda's (Evan Rachel Wood) talent as a coloratura soprano is eventually discovered. The young woman's music teacher compares the coloratura with ‘a snake’ and Veda lives up to this description. Mildred (Kate Winslet) watches on with mixed emotions – awe at her daughter’s talents, anguish at their estrangement and fear of the monster she knows lies underneath Veda's starry exterior.

Veda’s performances are voiced by Korean soprano Sumi Jo and Wood trained with an opera expert to achieve the correct postures and breathing techniques. Veda’s arias provide a thematic commentary on goings-on in the Pierce household from Veda’s first radio performance of ‘the Bell Song’ from Lakmé which foreshadows Veda’s seduction of Mildred’s lover, to the presence of an overbearing opera mother as reflected in her rendition of The Magic Flute's ‘Der Hölle Rache’.