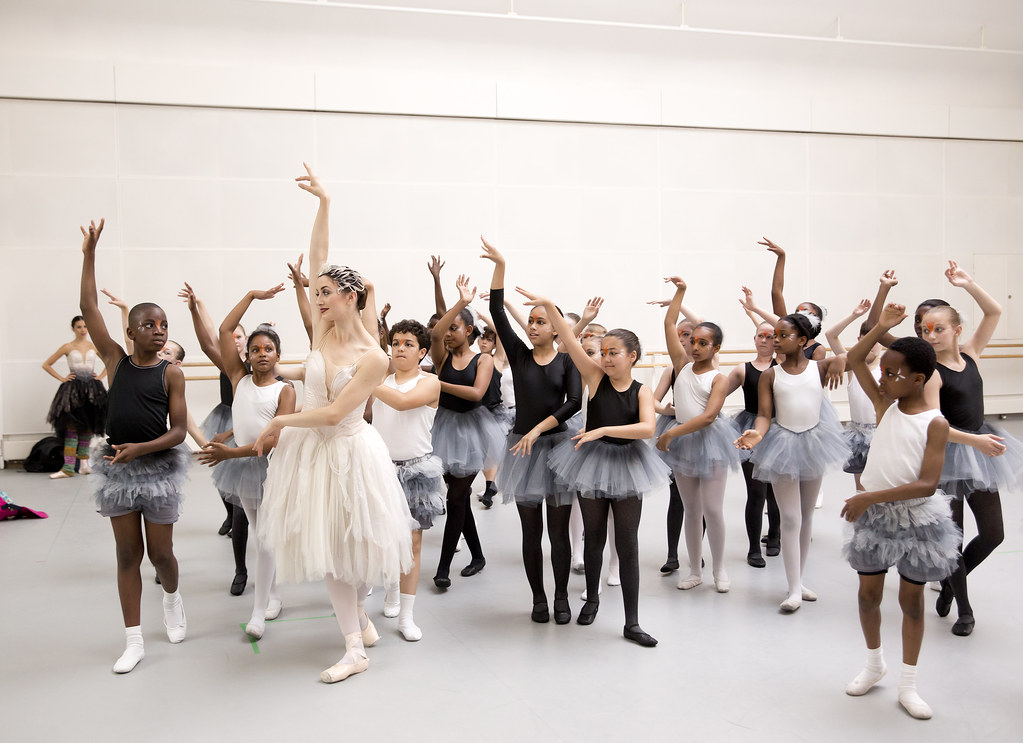 30 Years of Chance to Dance

Chance to Dance was launched 30 years ago in primary schools in London and is now delivered across England. Find out about this vital Royal Opera House initiative.

The Royal Ballet is keenly aware of its responsibility to attract artists from diverse communities. What many people may not know is that for more than 30 years the Company has been working in diverse communities to bring classical ballet and dance to thousands of children and their families across the country.

The Royal Ballet’s flagship Chance to Dance programme was originally established as a response to the absence of black dancers in the Company. The story began in the 1980s when the Royal Ballet Board, chaired by Baroness Blackstone, sought ways to increase the number of black and ethnically diverse dancers in the Company. ‘It was all part of a pattern to promote change and new thinking at that time,’ she says. ‘We took the view that there was not enough diversity – either of audiences or performers – in the world of classical ballet. But it wasn’t just about performance, it was also about involving ethnic minority audiences in the enjoyment of dance and ballet.’

The vision was shared by the heads of education at two companies, Jane Hackett at Sadlers Wells and Darryl Jaffray at the Royal Opera House. ‘The Royal Ballet said they wanted to employ more black dancers, but that these dancers weren’t coming forward,’ says Hackett. ‘The Royal Ballet School said they weren’t seeing applicants of the right standard, and even private ballet schools said they had very little diversity in their pupils.’ Hackett knew any scheme to attract children from communities unfamiliar with ballet needed to inform people about what the art form was, how they could train for it and what sort of career it offered. ‘I knew from my experience of running education schemes how alien the concept of ballet might be for the communities we wanted to reach,’ she says.

Hackett and Jaffray visited New York to look at the successful education programmes run by Dance Theater of Harlem and Eliot Feld’s New Ballet School. While Dance Theater of Harlem’s main aim was to create a pool of potential dancers for the Company, the Royal Ballet team was aiming for a wider cultural impact. ‘All education work is about giving opportunities, using people’s creativity, using what the Royal Opera House has to inspire people – not just telling them about the art form,’ says Jaffray.

Hackett set about finding local authorities in London interested in partnering the programme, which would involve demonstrations and visits to schools in the boroughs and a selection process to identify children to take classes together for two years. Lambeth and Hammersmith and Fulham were approached because of their high percentage of children from black and ethnically diverse backgrounds. Chance to Dance was rolled out in these two boroughs, to be joined in 2001 by Southwark and later Thurrock. The local authority pinpointed schools with head teachers who were enthusiastic about the project. ‘If they weren’t on board, it wouldn’t work,’ says Hackett. ‘We also had to include the families, by inviting them to attend events, getting the school to send out newsletters emphasizing the great opportunities for the children chosen for the scheme, and what a special thing it was.’  The programme also had to be accessible and interesting, and present no financial barriers. Hackett threw herself into finding sponsors for uniforms and shoes, and the Local Education Authorities found venues for the classes, so as not to put pressure on the Royal Opera House’s busy studio schedule..

Everyone felt it was important to provide a ‘path of progression’ for all Chance to Dance children. ‘It would be unfair to open a door to a child, show them what was on the other side, but not help them to get there,’ says Hackett. So she and Jaffray forged links with vocational schools such as Tring Park Arts Educational School, The Place and Urdang Academy, among others, as well as the Royal Ballet School’s Junior Associates programme.

On 3 October 1991 the programme was launched with a series of lecture demonstrations and auditions in primary schools in Hammersmith and Fulham and Lambeth. Hackett had asked Brenda Garratt Glassman, the only black dancer at The Royal Ballet School at the time, to be their first teacher, along with Michael Moor. Both British, they had also danced with Dance Theater Harlem (DTH). Hackett says, ‘We did lecture-demonstrations to all Year Fours from two or three schools, in the biggest of the school halls. They were open to family members too, so they could see what it was all about. For a couple of weeks in September we arrived with a mobile floor, set up, did a demonstration, showing them warm-up exercises and extracts from ballets such as The Sleeping Beauty and The Nutcracker.’

Black dancers from DTH had been making guest appearances with The Royal Ballet for several years, and it was decided, in the absence of black dancers in The Royal Ballet, for DTH to be a partner in the Chance to Dance programme for the first few years. Their dancers – including Richard Witter – took class with The Royal Ballet and danced in the schools demonstrations alongside Royal Ballet dancers, a balanced representation of ethnic origin and gender. ‘Role models were important for children,’ says Jaffray. ‘In subsequent years we were able to bring some of the children from that school who were part of the project, to show them what they did, so they could relate to them.’ 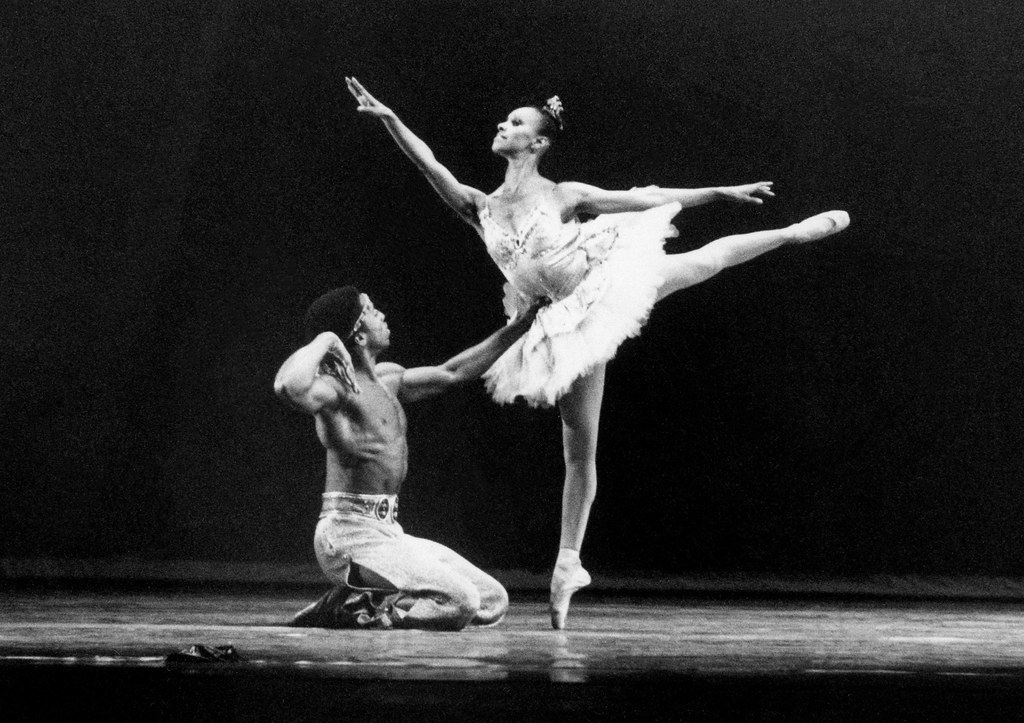 ‘The children’s reaction to the demonstration was amazing. There was whistling and shouting and stamping. It was wonderful. Then we’d ask the children to try some simple things. ‘Can you jump as high as the dancers?” Right at the beginning, we’d say, “watch how they do it, how do they land?”’ The following week the team held follow-up workshops in individual schools to identify children for the Chance to Dance programme. They were looking for attitude and physical suitability – foot flexibility and turnout, balance, coordination and musicality. The children weren’t aware of being assessed, because Jaffray tried to make it fun.

She remembers a proud moment when in the early days of Chance to Dance, the parents were invited to see what their children were doing. ‘Once they were chosen for the classes we had the parents in and told them about the project, what they could expect from us, what we would expect from them. I said we’re going to bring the children in and show you the talent they have and this is why they’ve been selected for the project. And the children came in in their red kit and they looked so fantastic already, all poised and posed, and I felt quite tearful.’

Today the Chance to Dance programme extends well beyond the London boroughs. In 2018 The Royal Ballet launched a national delivery model that widened its reach to Essex, the West Midlands and most recently Doncaster. They established partnerships with five independent dance schools in each area, delivering a training programme for teachers that explored ways of engaging children from different ethnic backgrounds creatively, without losing the emphasis on technique. Each dance school is teamed with a local primary school to provide demonstrations and workshops to Year Three children, from whom they form a 20-strong Chance to Dance company with regular lessons and performances to friends and family. Children who demonstrate particular potential are offered bursaries to continue their training at the local dance schools. It’s a way of mobilizing the private dance sector, where most young people experience ballet, and helping them too to reach a diverse cohort of young children.

The Chance to Dance programme arose from a need to give opportunities to a broader range of ​young dancers​, with one core aim being to diversify the artists in The Royal Ballet. Since then, it has opened up the world of ballet to over 30,000 young people and created a pipeline for talented children from diverse backgrounds to find careers in ballet, the creative industries and dance. In 2021 The Royal Ballet reaffirmed its commitment to better reflecting and celebrating ‘a diversity of communities and experiences’. It’s an ongoing process, but Chance to Dance demonstrates real community impact and The Royal Ballet’s genuine desire to embed change for children and young people across the country.

This article is part of our Black History Month celebrations. Find out more.