Operatic characters often look to the heavens, in thanks or in anguished supplication. 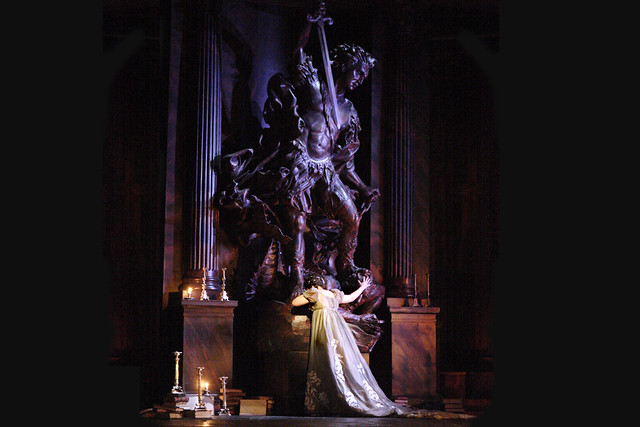 The High Priest Sarastro prays to the Egyptian gods that Tamino and Pamina will learn wisdom and virtue, and triumph in their trials. The noble simplicity of the melody, the lyrical writing for the bass voice and the lulling accompaniment of strings show that Sarastro, far from being the evil sorcerer the Queen of the Night had claimed, is both impressive and benign.

Maria has been condemned to death by Elisabetta. She has confessed her fear of death and her guilt about her past actions to her advisor Talbot. Now calm, she asks the crowd to join her in praying for God’s mercy. Donizetti depicts Maria’s new-found humility through her flowing, virtually unembellished vocal line, and her hopes of heaven through the predominance of rising phrases. The prayer begins with delicate harp accompaniment, but as the chorus joins Maria the full orchestra enters and the mood becomes impassioned and almost exultant.

Lucrezia Contarini prays that God may save her husband Jacopo, unfairly condemned by the Council of Ten. In contrast to her angry recitative at the start of the scene her prayer is gentle and lyrical – a long, flowing vocal line, of the kind that Verdi admired in Bellini’s arias, over an ostinato in the harp and soft woodwind chords. Lucrezia's vocal line grows more ornate as she becomes more ardent, and the aria culminates in an elaborate cadenza. Lucrezia’s mood darkens in the ensuing fiery cabaletta – a short passage of recitative following her prayer when she has learnt that her husband will be condemned to exile, and she swears that God will strike down the corrupt Council.

‘Allmächt’ge Jungfrau’ from Act III of Tannhäuser by Richard Wagner

Tannhäuser has travelled with a group of pilgrims to Rome to seek the Pope's forgiveness for his transgressions with the goddess Venus. Elisabeth is in love with Tannhäuser and has waited eagerly for him. When he does not return with the other pilgrims, Elisabeth prays in anguish to the Virgin to let her die. The almost chorale-like simplicity of the music, with its delicate textures and lyrical soprano line, conveys Elisabeth’s dignity and earnestness. Wagner also makes us aware of her pain through effective use of chromaticism. The aria culminates in Elisabeth’s heart-rending plea, set at a higher pitch than much of the rest of the aria, that through her death she may redeem Tannhäuser.

‘Ave Maria’ from Act IV of Otello by Verdi

Desdemona has had a premonition of her death. Alone, waiting for her husband Otello to arrive, she says her evening prayers. Her initial chanting of the words of the ‘Ave Maria’ evolves into a beautiful soprano melody, cradled in warm string harmonies, as Desdemona asks for the Virgin’s blessing on the sinner and the innocent. The aria closes in a soaring soprano phrase to the word ‘Hail’, sung pianissimo, before a final murmured Amen. The tenderness of this prayer gives the audience a certainty of Desdemona’s goodness and innocence – making the ensuing tragedy all the more terrible.

‘Vissi d’arte’ from Act II of Tosca by Giacomo Puccini

Scarpia, Rome's Chief of Police, has condemned Tosca’s lover Cavaradossi to death, and suggested a terrible bargain: he will spare Cavaradossi if Tosca will accept him as a lover. In agony, Tosca turns to God. She recalls her devotion to the Catholic Church, and how she has lived ‘for art and love’. Puccini makes the aria particularly poignant by bringing back the theme that introduced Tosca in Act I, as if she is remembering happier times. Her initial melancholy, illustrated in falling vocal phrases, evolves into ardour and urgency as she repeatedly asks God why he has rewarded her devotion with such bitterness.

Jenůfa’s stepmother the Kostelnička has given Jenůfa a sleeping draught. Meanwhile she takes Jenůfa’s illegitimate baby to the millstream, to drown it – worried that the child may prevent Jenůfa’s marriage to the kindly Laca. Jenůfa wakes up, bleary from the drug. She frantically searches for her child, and comes to the conclusion that her mother has taken the baby to show him to his father, Števa. She offers up a prayer to the Virgin, in a meditative mood that contrasts with her earlier agitation. It is a rare section of extended melody in an opera where much of the dialogue imitates speech. Shimmering strings and harp give the music an ethereal air, while the soaring soprano line and simple melody convey Jenůfa’s sincere faith. It is one of the most moving examples of Janáček’s writing for the soprano voice.

Marie feels remorse at her affair with the Drum Major and her behaviour towards her lover Wozzeck. She reads the Bible and prays. Berg contrasts Marie’s reading of Bible texts (all referring to Christ’s mercy and to women taken in adultery), intoned in Sprechstimme (sung speech used extensively in the opera) with her increasingly anguished sung pleas for God’s mercy. He sets the scene as a series of variations on a delicate opening theme, conveying Marie’s growing distress. By the end of the scene, speech gives way entirely to song, as Marie reads the story of Mary Magdalene, and implores God, her line rising to a top C: ‘Lord, you had mercy on her, have mercy also on me!’

‘Hagios! Hagios!’ from Act I of Król Roger by Karol Szymanowski

Long before Arvo Pärt and John Tavener attempted to capture the spirit of the Orthodox Church in their music, Szymanowski brought an Orthodox Church service on stage in the opening of his great opera Król Roger. The first act of the opera is known as the ‘Byzantine’ act, for the clear influence in it of Byzantine music and architecture. It opens very quietly, with an unaccompanied choir singing the words of the Byzantine Liturgy. Gradually the textures become more complex, with slow, hypnotic phrases in the bass voices answered antiphonally by more rapid passages in the high voices. The religious text is set syllabically, with every word declaimed. The texture becomes richer as strings join the voices and the bass voice of the Archbishop leads the congregation in chanted prayer.

Although he never lost his roguish humour, religion became increasingly important to Poulenc. This is reflected both in his beautiful religious choral works and in Dialogues des Carmélites, his only full-length opera. In Act II, new Prioress Madame Lidoine has warned her sister nuns of the adversity ahead of them. She leads the Carmelites in the ‘Ave Maria’, one of the most important prayers of the Catholic Church. The prayer is unaccompanied, with simple choral textures and rich harmonies. Poulenc gives particularly expressive harmonies to significant words and phrases, such as ‘Jésus’ and ‘mortis nostrae’. The mood is both tranquil and ardent, making this one of the most exquisite of operatic prayers.