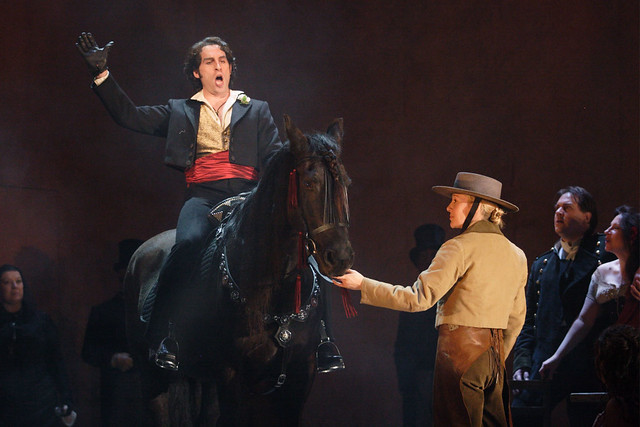 The bass-baritone voice may have only been officially categorized in the late 19th century, but from Classical opera to the present day it has inspired many composers to create psychologically compelling and musically beautiful roles for those with more heft to their voice than your average tenor. Here are ten of our favourites:

Figaro – Mozart’s The Marriage of Figaro

Mozart’s clever servant offers the bass-baritone a rare chance to play the romantic hero, with ravishing duets for Figaro and his bride-to-be, Susanna. There’s plenty of comic cunning to relish too, not least Figaro’s mock-militaristic Act I aria ‘Non più andrai’, and his attempts to deceive the Count in the Act II ensemble. Mozart’s other memorable bass-baritone creations include the seductive Don Giovanni and his comic side-kick Leporello.

Dulcamara’s flamboyant Act I aria ‘Udite, udite, o rustici!’ and his ensuing duet with the gullible Nemorino provide bass-baritones with the ultimate tongue-twisting challenge, as the comic con-man chatters away at break-neck speed. But the ‘doctor’ has a good heart for all his deception, urging Adina to tell Nemorino her true feelings in their charming Act II duet.

Boris is one of opera’s most psychologically engrossing roles. He has almost certainly committed a horrific crime to further his ambitions. And yet, the remorse he expresses in his monologues, coupled with his deep love for his people, make it impossible for us not to sympathize with him. Once the property of basses, Boris has been performed in recent years by notable bass-baritones.

Bizet makes up for the brevity of Escamillo’s role by giving him one of opera’s most exciting and rousing entrance arias: the Toreador’s Song, describing his triumphs in the bullring. Other lesser-known highlights include a lovely duet for Escamillo and Carmen in Act IV, which hints that these fiery spirits have found peace with each other.

Wagner wrote some of the greatest bass-baritone roles, and none more so than Hans Sachs. Pensive and wise, with a sense of fun and something of a temper, Sachs is one of the most humane and intriguing characters in opera – with wonderfully varied music, from the jovial ‘Cobbling Song’ in Act II to the introspective ‘Wahn’ Monologue in Act III. Wagner’s other fascinating bass-baritone protagonists include the Flying Dutchman and the mighty (three-opera!) role of Wotan in Der Ring des Nibelungen.

Verdi turned to the bass-baritone at the end of his career to create one of opera’s best comic characters: the Shakespearian fat knight Sir John Falstaff. This loveable rogue’s music moves like quicksilver from the grand ‘Onore’ monologue in Act I, through delicate nostalgia in the arietta ‘Quand’ero paggio’ in Act II to the melancholic Act III monologue ‘Mondo ladro’ – though a glass of mulled wine soon cheers him up!

Puccini uses the bass-baritone voice’s large range and varied vocal colours to deftly convey Scarpia’s suave villainy. The exaggerated courtesy of his Act I exchange with Tosca, the growling menace of the Act I Te Deum, the violent excitement of his Act II soliloquy and the brutality of his Act II duologues with Tosca all create a vivid impression of a psychotic yet strangely charismatic man.

John the Baptist’s low-pitched, rapt prophecies from his prison cell – all the more unearthly as he is unseen – make Salome’s opening scene one of the most memorable in opera. Brought up from his dungeon, Jokanaan reveals a ferocious will as he forcefully rejects Salome’s seduction. Only when he urges her to seek salvation does his music shift to ardent, beautiful lyricism – if only she had listened!

He may be less well-known than Puccini's creation, but Nick Shadow (‘Old Nick’) gives Scarpia a run for his money for the title of Best Bass-Baritone Villain. Charmingly debonair in Act I, roguishly destructive in Act II, Shadow finally shows his true colours in Act III’s furious aria ‘I burn, I freeze!’, the dark timbre, wide range and sheer power of his voice creating a terrifying impression of devilish malignance as he condemns Tom Rakewell to insanity and descends to Hell.

The Protector – Benjamin’s Written on Skin

The Protector is an operatic descendant of Debussy’s jealous husband Golaud in Pelléas et Mélisande. Just as Debussy contrasted Golaud’s dark bass-baritone with the boyish high baritone of Pelléas, Benjamin contrasts the anguished low-pitched utterances of the Protector – occasionally shifting into speech – with the serene purity of the Boy’s countertenor, offering a brilliant portrayal of a troubled and dangerously jealous man.