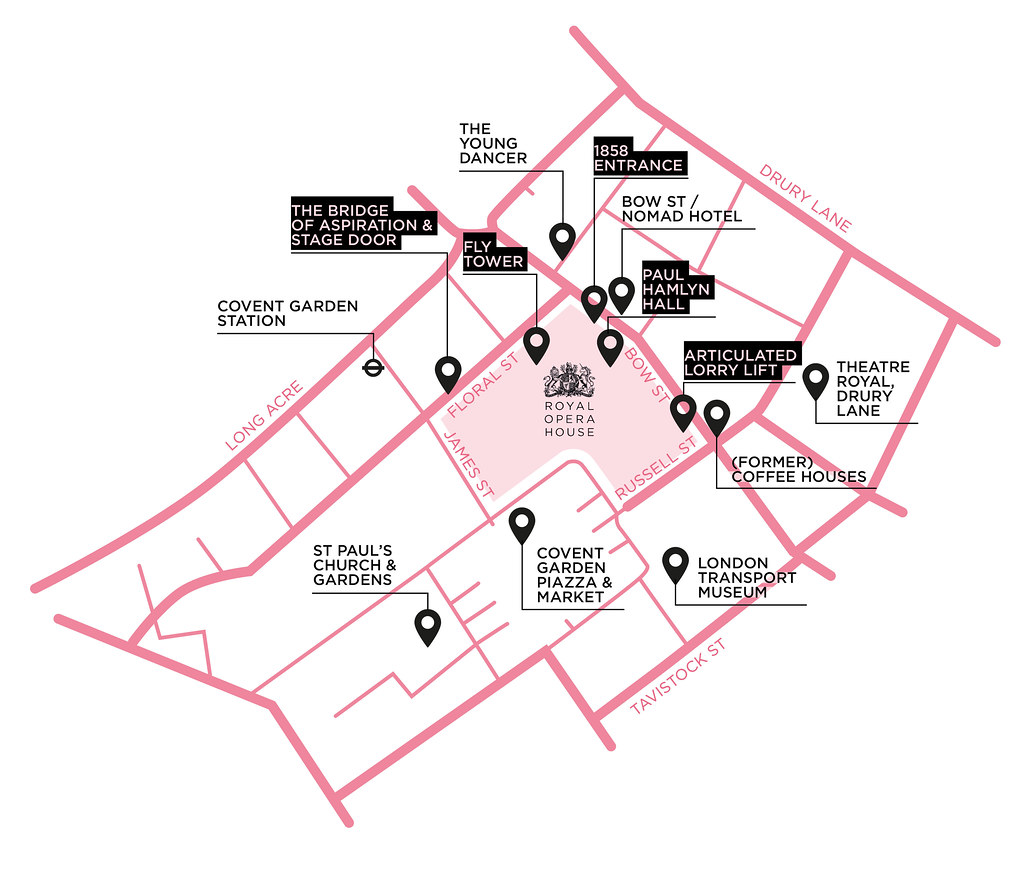 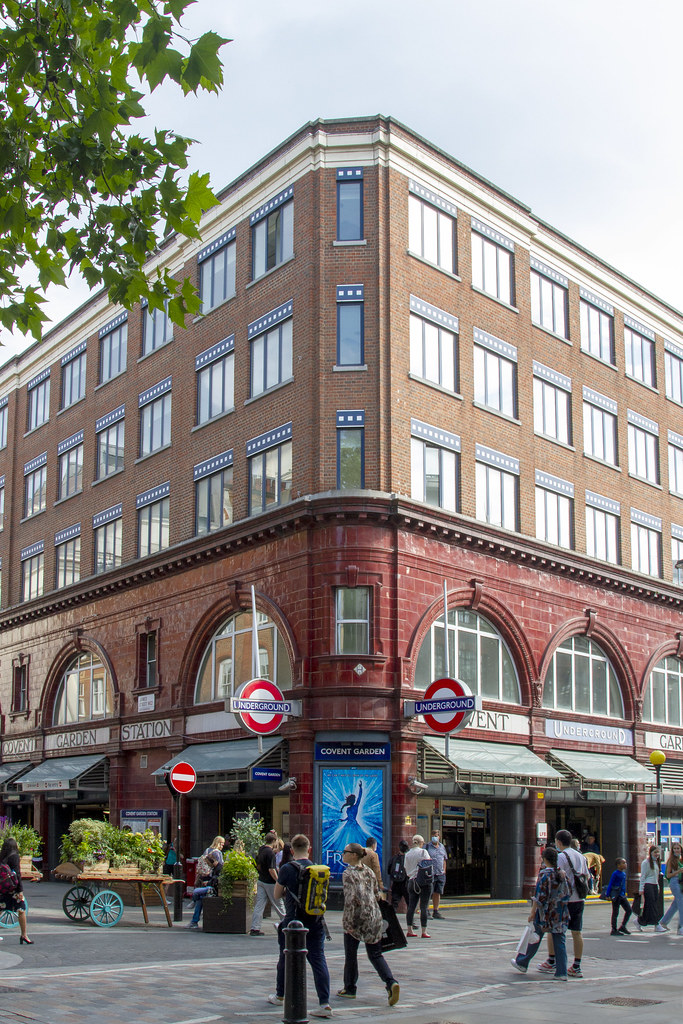 This station was opened in 1907 and is now a Grade II-listed building. A good example of the work of the Arts & Crafts English architect Leslie Green, it retains the very distinctive oxblood-red tiles on the façade.

Until the new dance studios at the opera house were built in 1999, generations of Royal Ballet dancers commuted on the Picadilly line between the rehearsal studios located in Barons Court and the Covent Garden stage, occasionally multiple times a day. 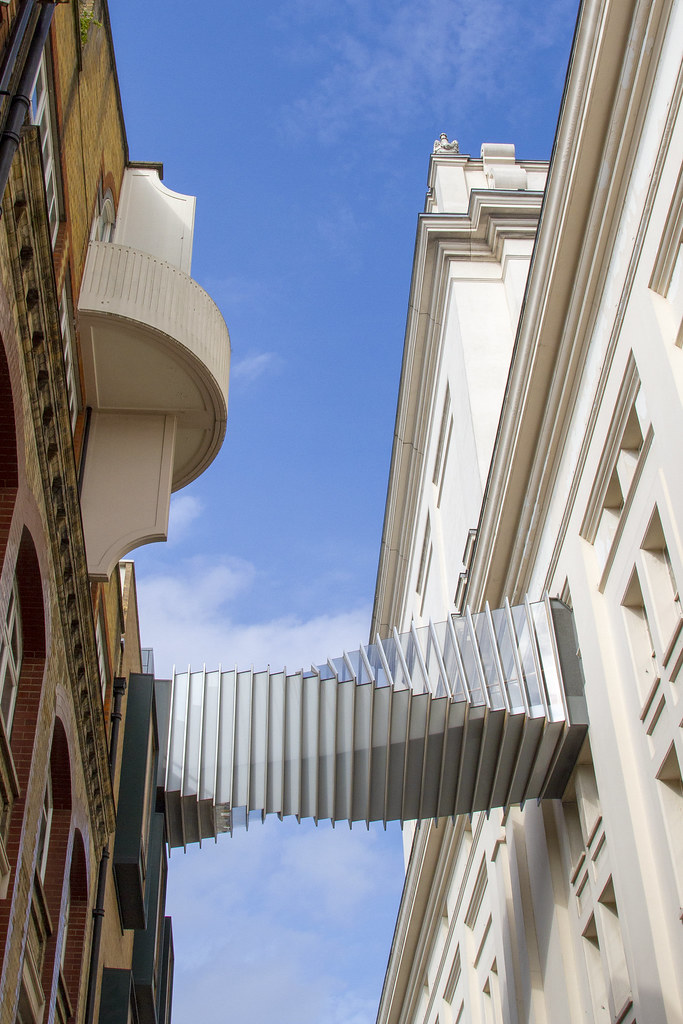 The Bridge of Aspiration, Stage Door and Fly Tower

This ingeniously designed bridge links The Royal Ballet School with the Royal Opera House. Designed by the Wilkinson Eyre Architects in 2003, it evokes the fluidity of dance while linking two buildings that are not exactly aligned.

Just below the bridge on the right is Stage Door, the main entrance for staff and artists at the Royal Opera House.

The fly tower is also visible rising 37m over the theatre. It is a system for moving sets and equipment, including the many backdrops, lights and curtains used in a performance. It was significantly enlarged in the 1990s and designed in a classical style to match the rest of the building’s exterior. 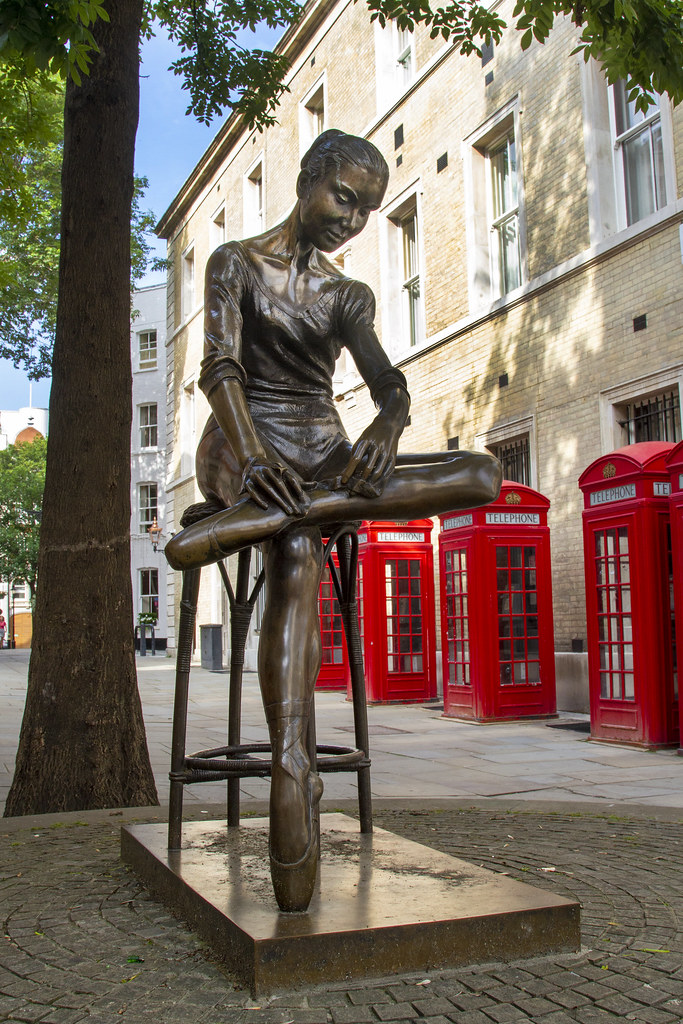 London-based artist Enzo Plazotta was fascinated by the study of movement and the female form of ballerinas. This statue from 1988 is one of better-known works. Another one of his dancing sculptures can be found on the corner of 46-57 Millbank in Westminster. Jeté (made in 1975) immortalises former Royal Ballet principal dancer David Wall, who at age 21 became the youngest male Principal in the history of The Royal Ballet. 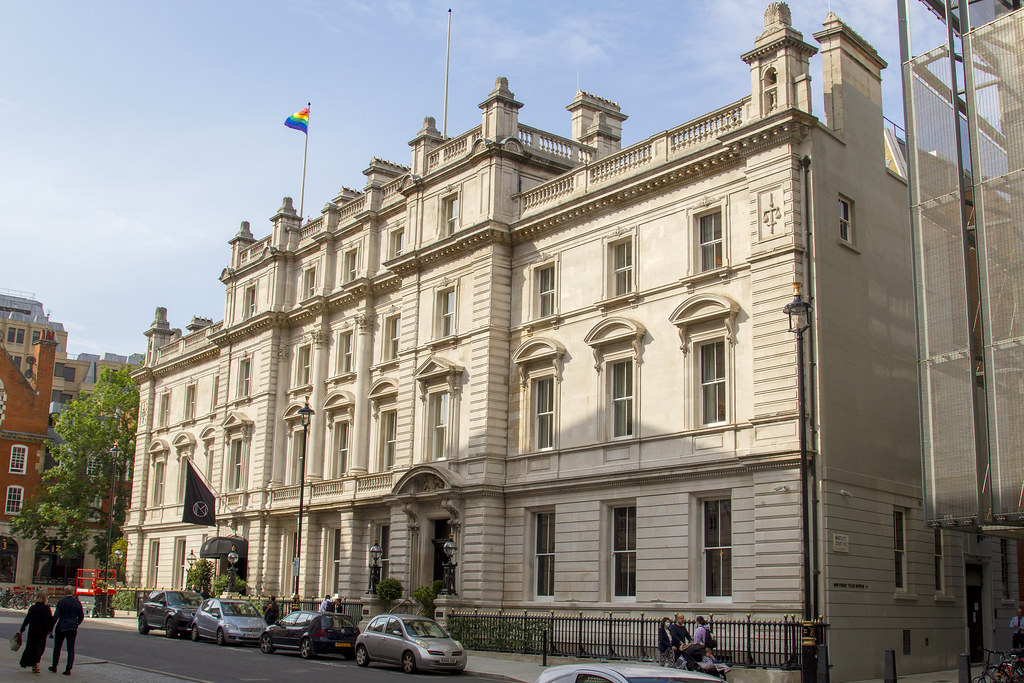 The former magistrates’ court and police station (home to the famous Bow Street Runners) is a Grade II-listed building dating from 1881 that has recently been transformed into a luxury hotel. Some areas have been decorated by Royal Opera House scenic artists. It also houses the new Bow Street Police Museum.

The runners occasionally sat in the auditorium to protect the precious jewels of artists and patrons. 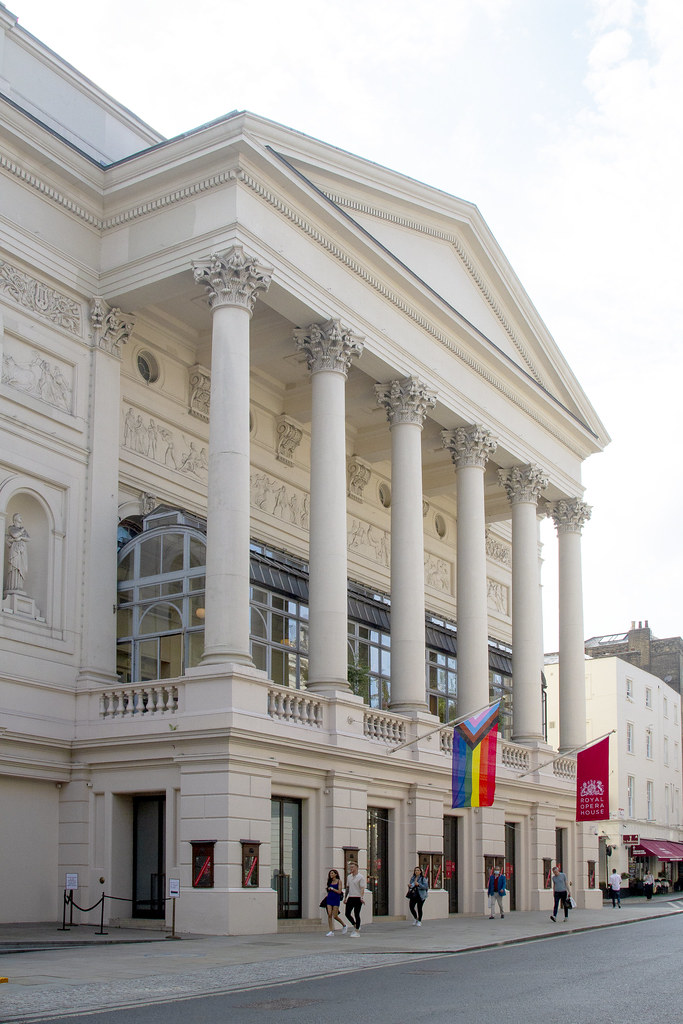 This part of the building, which includes the auditorium, is the only remaining part of the E. M. Barry’s 1858 building, the third theatre built on this site since 1732 following devastating fires in 1808 and 1856. Since 1808, the theatres on this site have favoured a Bow Street (rather than Covent Garden) entrance, probably to counter their main rival in Drury Lane.

Beneath the pediment are the Flazman-Rossi frieze and statues which survived from the 1856 fire. The frieze depicts tragedy and comedy and is made from the unusual Coade stone, an artificial material that is no longer made.

The portico was originally a carriage entranceway until 1952, when it was filled to increase the foyer space. 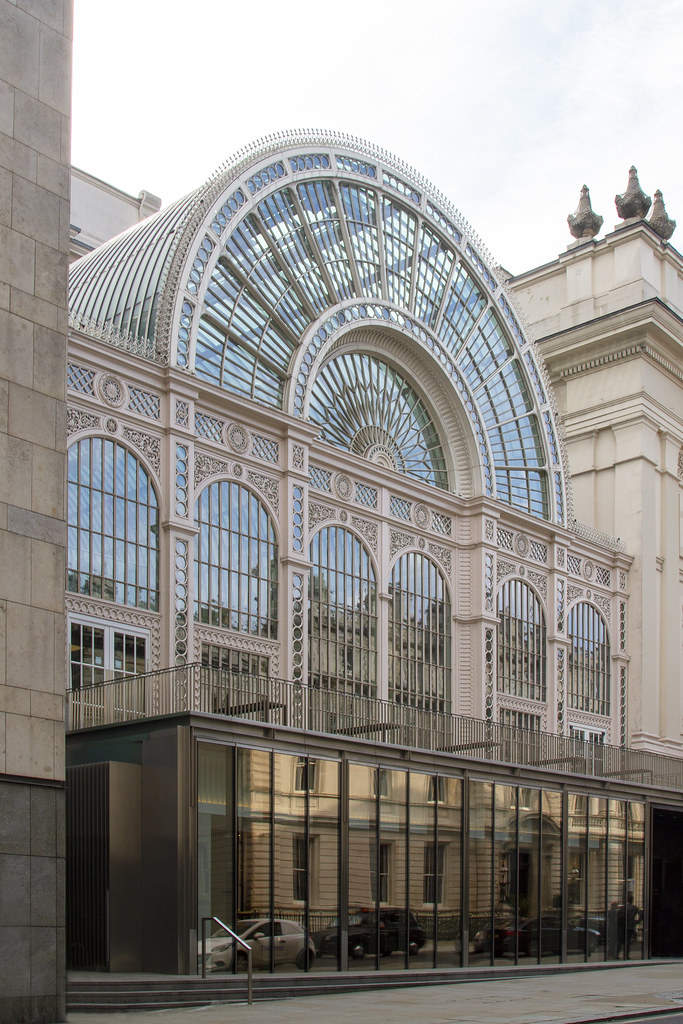 The Paul Hamlyn Hall, originally know as the Floral Hall, was constructed in 1859 to E. M. Barry’s designs (who later designed Charing Cross station). Built to be used as a flower market during the day and a dance hall at night, it succeeded in neither and was largely used as a fruit & veg market, and from 1956-1999 as a warehouse for theatre scenery. In 1999 it was fully refurbished and integrated to the theatre as a central hospitality space and in 2018 the space below the hall was redeveloped further. 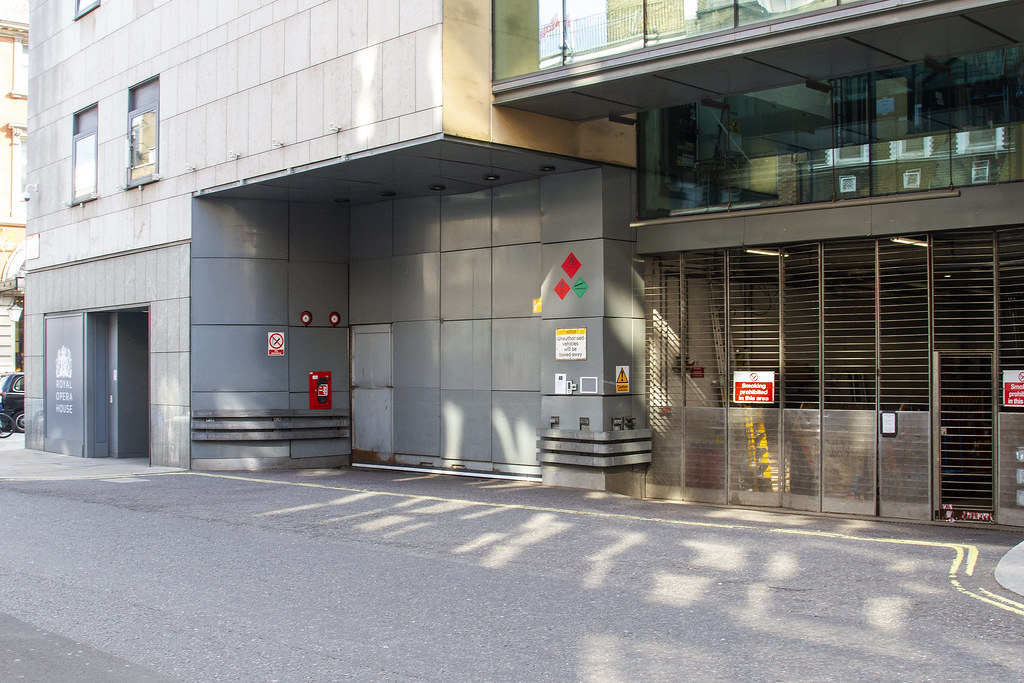 This unprepossessing middle opening by the Royal Opera House’s goods entrance is one of the biggest lifts in Europe. Large articulated lorries with their precious cargo of scenery, costumes and props come from all over Europe, as well as our stores in Aberdare (Wales), and drive straight into the 23-tonne capacity lift that takes them up one floor to the stage level. 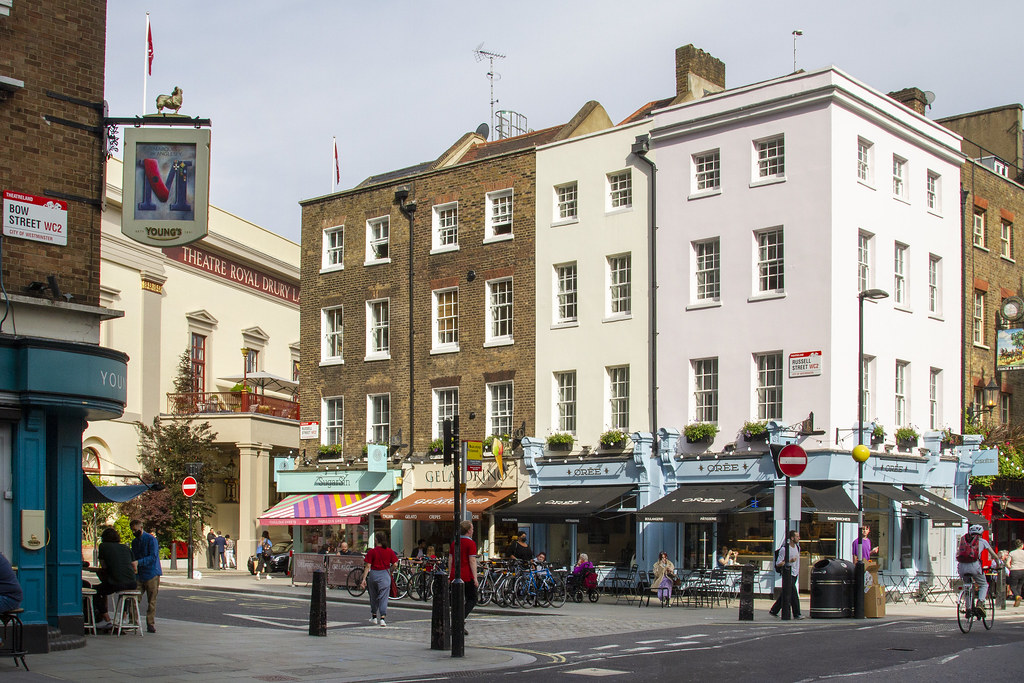 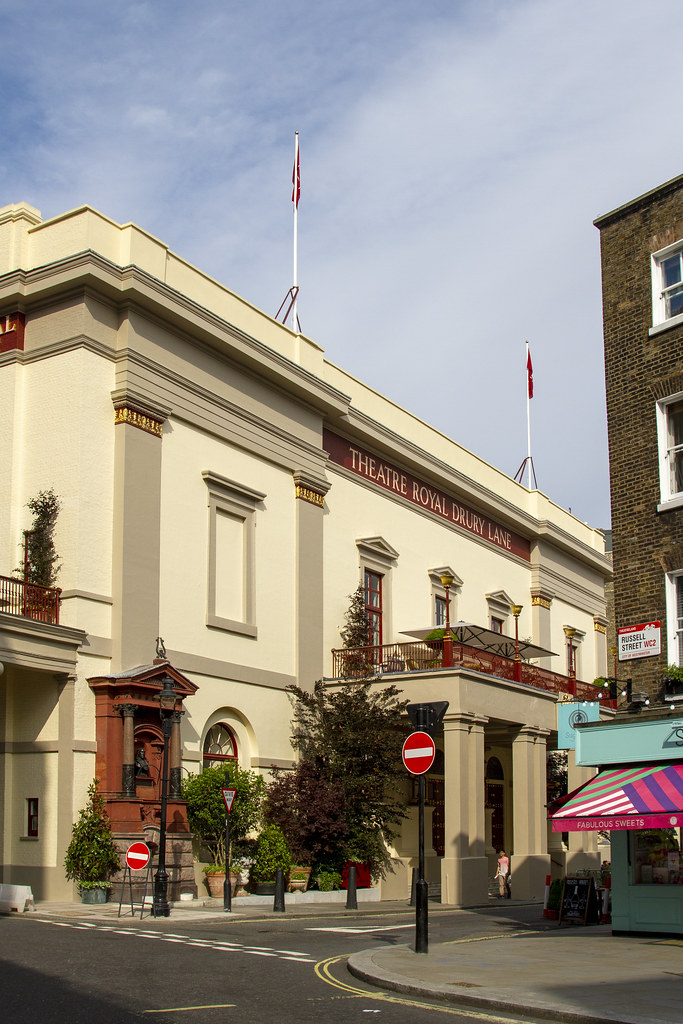 The theatre used to be one of the leading theatres in London and a great rival to the Royal Opera House, hence both buildings’ main entrances on the Bow Street side. Since the Second World War it specialises in musical theatre and it is now owned by Andrew Lloyd Webber. It is the 4th building on this site, the earliest of which dates from 1663, making it the oldest theatre site in London still in use. The current theatre was rebuilt in 1812 following a fire and is a Grade I-listed building. 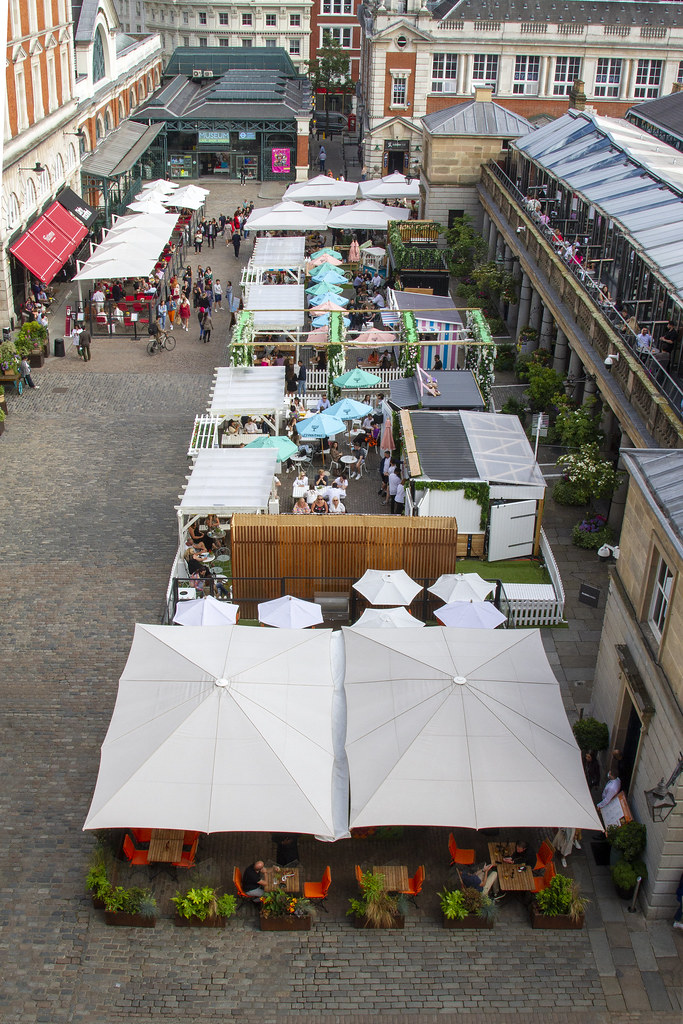 In 1630, the 4th Earl of Bedford commissioned Inigo Jones to build some fine houses to attract wealthy tenants. Within decades, however, the area had become more famous for its drinking houses and brothels. The main market building was constructed in 1830 in an effort to smarten the ramshackle market that had taken quickly taken residence.In 1974 the thriving market relocated to the New Covent Garden Market and the market buildings transformed into a leisure destination. Street entertainment have been a fixture since Samuel Pepys days, but the courtyard space is dedicated to classical music only. Artists of the Royal Opera House have been known to perform in the piazza, such as the Bow Street Rappers (the rapper sword dance in Morris Dancing) in the 1980s.

The land was originally known as the "the Convent Garden” of Westminster Abbey and was later owned by the Earls, then Dukes, of Bedford. 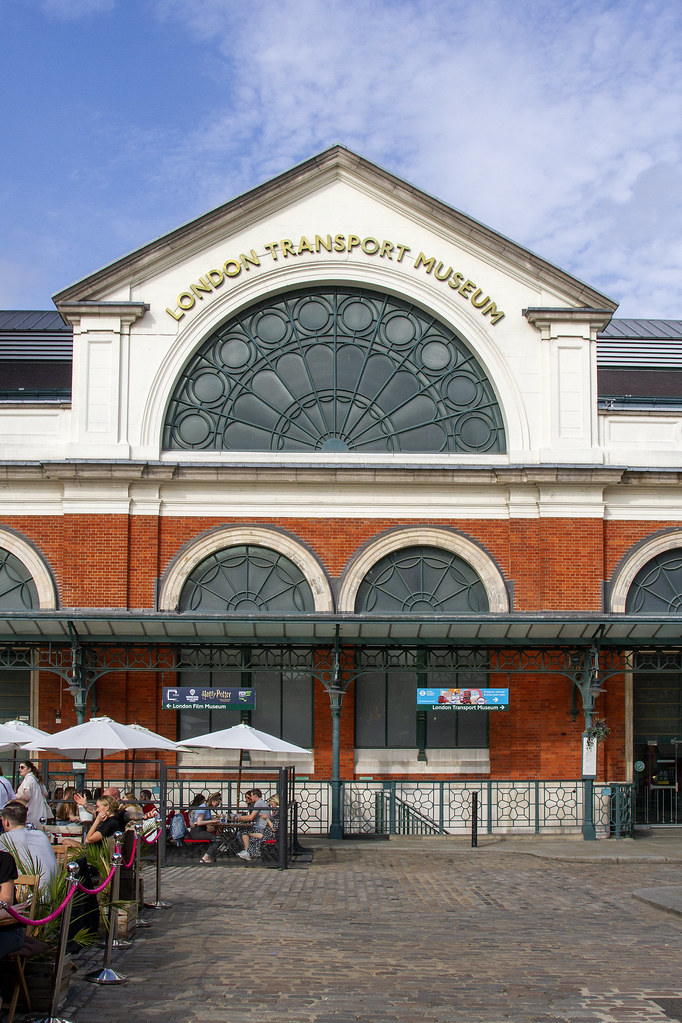 The Covent Garden Flower Market was opened in 1872 and was the heart of London’s wholesale flower for the next 100 years. When the market moved to Nine Elms in South London, the building was restored and re-opened as London Transport Museum in 1980. The Jubilee market next door, in a building dating from 1904, was re-opened in 1987. 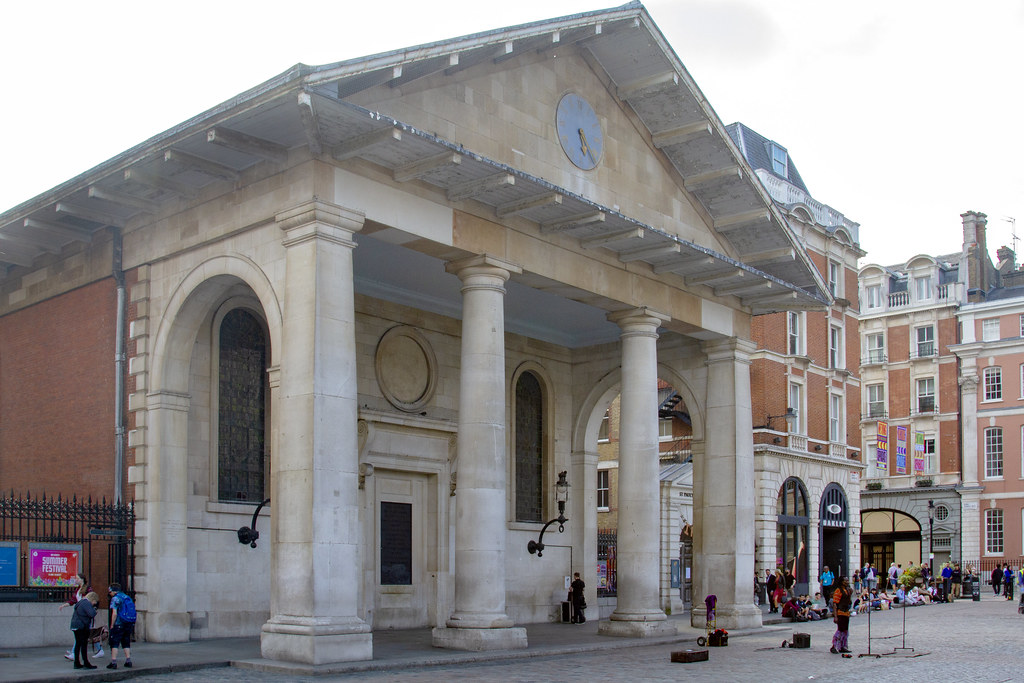 Situated at the heart of the West End, St Paul’s is also known as the ‘actors’ church’. It was designed by Inigo Jones and completed in 1633 (and rebuilt in 1795) and is the last surviving original element of Jones’s designs for the piazza.

The celebrated 17th century wood-carver Grinling Gibbons is buried there and one of his carvings, originally from St Paul’s Cathedral has been relocated to the west screen.

The Piazza-facing side is actually a fake door, the church is accessed from the west through the churchyard.