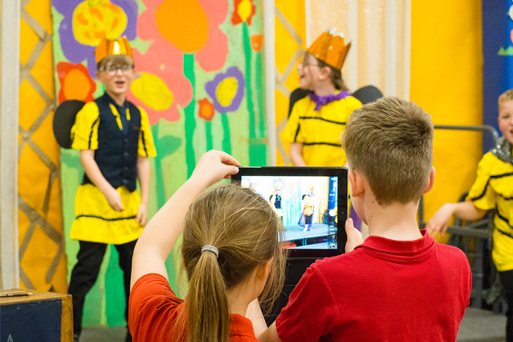 Blaring out in neon blue in the corridor at Northwick Park is an illuminated sign in handwritten font that simply reads ‘be kind’. It’s a characteristic touch from a school that seems imbued from top to bottom with a warm and inclusive atmosphere. This nurturingenvironment has developed hand-in-hand with a growing focus on cultural learning and has underpinned the school’s journey to Artsmark Platinum.

It has not been a simple journey for the school. Northwick Park is on Canvey Island, a riverside area of Essex with poor transport access and historically high levels of deprivation. Over half of Northwick Park’s pupil intake is eligible for pupil premium. In 2006, the school had to overcome a problematic rebirth as an amalgamation of an infant school and a junior school with problems with behaviour.

Emma Lane, the current headteacher who had been the head of the predecessor infant school, is candid about the challenges of taking the reins at the newly combined school: ‘When I came in as Acting Head, what I could not get over was the behaviour that I saw. I’d done a lot of School Improvement work and a lot of outreach work in my career. I had been in some tough old schools, but I’d never seen behaviour like it’.

‘So, I was immediately thinking: “how am I going to engage these children, particularly these really, really difficult boys?” So, the first thing I did was lots and lots of sport - cross country running, football. It was quite simple - if you want to play in my football team, you’ve got to behave in class’.

Buoyed by the success of sport in addressing behavioural challenges, Emma started looking for other areas to target. Already at the former junior school was NQT and music graduate Sarah Goldsmith – now Assistant Head at the school – who was already starting music education work beyond class time. Music, always popular with pupils seemed a natural next step.

‘We started with our choirs’, Emma recalls, ‘but it tended to be the higher-achieving, better-behaved children that wanted to sing. So, we established a boys’ choir and, under Sarah’s guidance, we picked the right things to start with that engaged the boys. Then we had the fantastic idea of having a school rock band that was really successful. Within three years, it suddenly became really cool to do music at Northwick’.

From small beginnings, the focus on music and, increasingly other art forms, has grown at Northwick Park. Sarah, while retaining an overall lead on music teaching, is looking to spread responsibility for arts teaching more widely amongst the staff, including Learning Support Assistants: ‘I’ve got two members of staff that are incredibly talented musicians, so I’ll work alongside them for certain things. When we started doing recorder in Year 3, we noticed one of our LSAs was incredibly good at it, so I’ve made sure she’s in on those sessions. And with our work on ‘Write an Opera’, if I’m called out somewhere else, the opera sessions still happen, because I’ve got a team of four trained LSAs. Each year, I step back a bit more, which, in some ways is really hard, but in other ways is exactly how I want it to be’.

And this focus is being backed up with financial investment. With the relentless focus on ensuring inclusion for children from all backgrounds, Emma is happy to use Northwick Park’s Pupil Premium funding to support arts activity: ‘It’s priorities. We find the money for things. When we went to perform at ‘Christmas at St Paul’s’ in Covent Garden, we took all the families on the bus and we couldn’t charge them. But actually, that was a really good use of £500’. 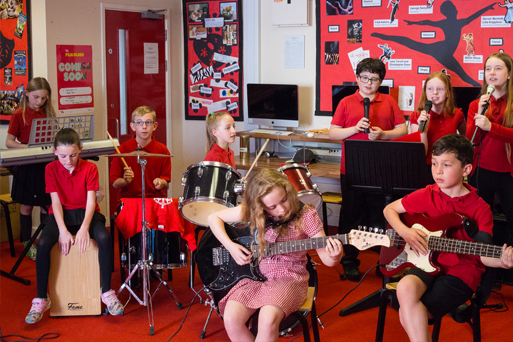 Behaviour remains a key motivation, but a diminishing issue for Northwick Park. In their most recent report, Ofsted deemed pupils’ behaviour around the school and in class ‘exemplary’.

‘They didn’t see any issues with behaviour, but that’s because we work so hard at it all the time. My teachers laugh about me because, when children come back from going out on visits, my first question is always ‘how was the behaviour?’ And it’s always fine’. says Emma, laughing.

Pride in achievement in the arts is a key part of this changing picture. Emma and Sarah actively recognize the need for children to feel part of something bigger than themselves and the school meets this need with investment, both of time and money.

‘If we are taking the choir somewhere, we give them time to feel secure with their performance’, says Sarah. ‘At a musical festival we attended this morning, it was very affluent - in fact, a couple of very affluent schools, private schools, and then us. You could see it that the children were actually a bit fazed by it to start with, but they wanted to perform’.

Emma adds, ‘About six or seven years ago, at a musical festival we attended, the adjudicator complimented one school on how smart they looked in their blazers. Ours were all in tatty, old school uniforms. So, we now provide tops, trousers, skirts, socks and shoes. You see massive pride when they put their tops on’.

Northwick Park is also actively engaged in building links with the wider Canvey Island community, so much so that, in the school’s most recent Ofsted inspection, a parent remarked that ‘the community is held together by the school’.

Sarah, in addition to her work with the school’s musicians, convenes a community choir that have collaborated with the school’s choirs and it has proved a vehicle for encouraging parental engagement. Musical professionals based in the community are invited into the school regularly, providing inspiration for pupils. As Sarah says, ‘I love that they come in and inspire the children to think, ‘it’s alright to do this - it could be a job, or it could be a hobby’.