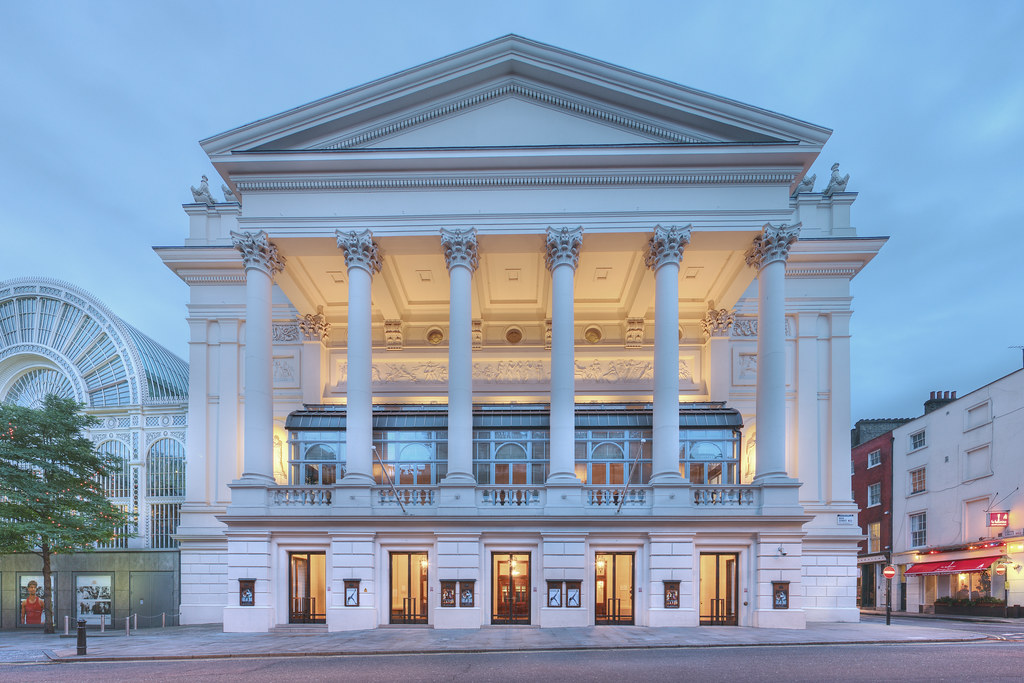 The Orchestra of the Royal Opera House was founded in 1946 as the Covent Garden Orchestra, when the theatre reopened after World War II as the nation’s first permanent home for opera and ballet. It took on its current title in 1968 when The Royal Opera received a Royal Charter. Throughout its existence the orchestra has been distinguished by the number of top musicians who have joined its ranks and the outstanding roster of international conductors with whom it has played. It has been acclaimed by public and critics alike and has won many awards.

Constant Lambert was appointed Music Director of Vic-Wells Ballet in 1931, and stayed with the Company on its establishment in the Royal Opera House in 1946. Lambert conducted the orchestra in the Vic-Wells Ballet’s first performance in its new home, The Sleeping Beauty on 20 February 1946. Later that year on 12 December he conducted the inaugural production of the Covent Garden Opera Company in his own arrangement of Purcell's The Fairy Queen. Lambert retired as Music Director the following year but returned frequently as a guest conductor for both companies until his death in 1951.

Karl Rankl was the first Music Director of the Covent Garden Opera Company. He played a crucial part in establishing the Company in 1946. After several years of conducting nearly every performance at the Royal Opera House, Rankl resigned in summer 1951, bidding farewell with a performance of Tristan und Isolde. His successor, Rafael Kubelík held the post 1955–8. Highlights of his directorship included the UK premieres of Les Troyens and Jenůfa. Both during this period and in later years the orchestra received many visits by guest opera conductors including John Barbirolli, Carlo Maria Giulini, Rudolf Kempe, Erich Kleiber and Otto Klemperer, whose contributions to artistic standards and playing style proved invaluable.

When Lambert stepped down from The Royal Ballet, he was succeeded by a former pupil of his, Robert Irving. Arguably one of the finest ballet conductors of the 20th century, Irving became Musical Director in 1949 and stayed in the post until 1958. As Music Director he arranged the score for Frederick Ashton's Birthday Offering (1956) and was also with the Company when it received its Royal Charter that year. After leaving The Royal Ballet, Irving went on to become Music Director of the New York City Ballet Orchestra and worked extensively with the Martha Graham Dance Company.

Rafael Kubelík left the Royal Opera in 1958 and in 1961, Georg Solti took up the post of Music Director. Solti began his ten-year directorship with the intention of making the Royal Opera House 'quite simply, the best opera house in the world', and it was under his direction that the orchestra rose to its current level of international acclaim. Highlights of Solti’s time as Music Director included a new production of Der Ring des Nibelungen (1962–4), the first British staging of Moses und Aron (1965), the orchestra’s first foreign tour in 1970 (with The Royal Opera to Munich and Berlin) and a complete performance of Les Troyens (conducted by Colin Davis) in 1969.

Colin Davis became Music Director of The Royal Opera in 1971. Developments under his leadership included an acclaimed series of recordings (Les Troyens and Peter Grimes both won the Grand Prix Mondial du Disque), the premieres of Tippett’s The Knot Garden and The Ice Break and the first British performances of the three-act version of Berg’s Lulu. The orchestra also won much praise on tours to Japan, La Scala, Milan, and Los Angeles.

Irving was succeeded at The Royal Ballet by Hugo Rignold, a former staff conductor at the Royal Opera House. He stepped down in 1960 to be followed by John Lanchbery, a former conductor with Sadler's Wells Theatre Ballet. Lanchbery arranged numerous scores for the Company, for ballets including Ashton's La Fille mal gardée (1960), The Dream (1964), Monotones (1966), A Month in the Country (1976) and Tales of Beatrix Potter (1971), Kenneth MacMillan's Mayerling (1978) and Natalia Makarova's production of La Bayadère (1980). He resigned in 1972 but continued to conduct regularly for the Company until 2001.

Ashley Lawrence was appointed Principal Conductor of The Royal Ballet in 1972 and made Music Director the following year. He had previously worked with MacMillan (who had been made Director of the Company in 1970) at Deutsche Oper Berlin. He retired in 1987 but continued to conduct at the Royal Opera House until 1989, when he gave his final performance with the orchestra conducting the premiere of MacMillan's new production of The Prince of the Pagodas.

Bernard Haitink took over from Colin Davis as Music Director of The Royal Opera in 1987. From the outset he involved the orchestra in regular appearances on the concert platform, first in the Garden Concerts at the Royal Opera House, and later in major London concert halls, under his own and guest conductors’ batons. Highlights of Haitink’s tenure included the first performances at Covent Garden of Borodin’s Prince Igor and Janáček’s Kat’á Kabanová, a tour to Japan with an all-Mozart programme, and the restagings of much of the Wagner repertory. He was awarded the Evening Standard Opera Award for Outstanding Production twice, for Die Meistersinger von Nurnberg in 1993 and Das Rheingold and Die Walkure in 1994.

In 1997 the Royal Opera House closed for an extensive two-year development programme. During this period the orchestra undertook a number of international concert tours in addition to performances with The Royal Ballet and The Royal Opera. With The Royal Opera, the orchestra toured to the Metropolitan Opera, New York, to perform Pfitzner’s Palestrina, to the Edinburgh Festival to perform Rameau’s Platée and Verdi’s Don Carlos, I masnadieri and Luisa Miller, to Baden-Baden to perform La traviata under the baton of Plácido Domingo and to the Savonlinna Opera Festival to perform Peter Grimes and I masnadieri. In London the Orchestra of the Royal Opera House and The Royal Opera gave concert performances of Elisabetta, Mefistofele, Parsifal and Die ägyptische Helena. In autumn 1998 they gave two performances of Der Ring des Nibelungen (at the Royal Albert Hall and at Symphony Hall, Birmingham). Other highlights with The Royal Opera included a highly praised concert performance of Die Walküre at the Concertgebouw in Amsterdam as part of a series of events celebrating Bernard Haitink’s 70th birthday year. The orchestra gave concert tours in Italy, Germany, Spain, Portugal and Croatia and in spring 1999 undertook a coast-to-coast concert tour of the USA under Edward Downes.

With The Royal Ballet, the orchestra toured to Madrid, Belfast, Japan and China, playing classics from the Company's repertory including The Sleeping Beauty, Giselle, La Bayadère, Manon and Romeo and Juliet. In London they performed a Christmas season at the Royal Festival Hall with Tales of Beatrix Potter and Cinderella, and celebrated the 100th birthday of Ninette de Valois with gala performances at the Barbican. The Company and the orchestra were in the Coliseum for a Victor Hochhauser season in summer 1998 before moving to the newly refurbished Sadler's Wells in the autumn, where throughout the 1998/99 Season they performed a programme that balanced full-length classics with mixed programmes of one-act ballets.

In December 1999 the redeveloped Royal Opera House reopened with a series of gala performances including concert performances by The Royal Opera and extracts performed by The Royal Ballet from classics including The Sleeping Beauty, Symphonic Variations and Fearful Symmetries, closing with a grand défilé to the finale of Stravinsky's The Firebird. These were followed by performances of a new production of Verdi’s Falstaff, conducted by Haitink. Highlights of the first years in the redeveloped Royal Opera House included performances of Parsifal under Simon Rattle and of Die Frau ohne Schatten under Christoph von Dohnányi, and, with The Royal Ballet, a Diaghilev celebration programme, featuring Nijinsky's L'Apres-midi d'un faune and Jeux conducted by Andrea Quinn.

The orchestra continues to give concert performances with The Royal Opera. Under Pappano, the orchestra performed Britten’s War Requiem and Verdi’s Requiem in 2009 in London and Birmingham. They also toured to the Vienna Konzerthaus in March 2010 to give a programme of works by Wagner, Liszt and Bartók, joined by soprano Nina Stemme. Members of the orchestra performed the chamber version of Mahler’s Das Lied von der Erde at Cadogan Hall in 2011, again under Pappano. The orchestra has also played under Pappano in concert performances of Ariadne auf Naxos (2014), Simon Boccanegra (2013) and Die Meistersinger von Nürnberg (2012) at Birmingham's Symphony Hall and Simon Boccanegra (2010) and Les Troyens (2012) at the BBC Proms.

The Royal Ballet performs to a range of symphonic repertory with members of the orchestra or of The Royal Ballet’s music staff performing as soloists. Highlights have included George Balanchine’s ballets to Stravinsky’s Violin Concerto and Ravel’s Tzigane, MacMillan’s Concerto (to Shostakovich’s Piano Concerto no.2), Ashton’s Rhapsody (to Rachmaninoff’s Rhapsody on a Theme of Paganini) and Liam Scarlett’s award-winning ballet Asphodel Meadows (to Poulenc’s Concerto for Two Pianos). The Royal Ballet and the orchestra collaborate regularly with the Royal Opera Chorus and with solo singers, including in MacMillan’s Gloria, Requiem and Song of the Earth, Nijinska’s ballet on Stravinsky’s Les Noces, and Will Tuckett’s ballet of Kurt Weill’s The Seven Deadly Sins.

The Orchestra of the Royal Opera House works regularly with leading young choreographers and contemporary composers, performing in many world premieres of works commissioned by The Royal Ballet. Particular highlights have included Wayne McGregor’s Limen (to a score by Kaija Saariaho) and Infra (to a score by Max Richter), Kim Brandstrup’s Invitus Invitam (to a score by Thomas Adès based on a series of dance works by François Couperin) and Christopher Wheeldon’s full-length ballets Alice’s Adventures in Wonderland and The Winter's Tale, with music by Joby Talbot.

The Orchestra regularly records DVDs with both The Royal Ballet and The Royal Opera, both on our own label Opus Arte and on other labels including EMI. Recent releases with The Royal Opera include Royal Opera commissions The Minotaur, Anna Nicole and Written on Skin, and Don Carlo, La traviata, Faust, Gloriana, Adriana Lecouvreur, Il trittico, Tosca, Turandot and Eugene Onegin. Recent releases with The Royal Ballet include an Ashton celebration, three ballets by McGregor, three ballets by MacMillan, Mayerling, La Bayadère, Sylvia, Don Quixote, Manon, Ondine, Romeo and Juliet and Alice’s Adventures in Wonderland.

CD recordings with Pappano include two discs of Wagner highlights with Domingo, and Tristan und Isolde with Domingo and Stemme, released in 2005. The Orchestra can also be heard accompanying The Royal Opera and The Royal Ballet for Big Screen events in the UK and in cinema screenings transmitted worldwide.

Members of the orchestra play an active role in the work of the Royal Opera House's Learning and Participation Department, perform occasional chamber works in the Linbury Studio Theatre, such as Adès’s Powder Her Face in 2010, and play for other events such as the popular Tea Dances held in the Paul Hamlyn Hall. Orchestra members also play a vital part in the free Monday lunchtime recital series, performing chamber music and solo repertory.