Designer and painter Yolanda Sonnabend (1935–2015) made her Royal Ballet debut in 1963, creating set and costume designs for Kenneth MacMillan’s Symphony and went on to become an important collaborator with MacMillan. Other designs for The Royal Ballet included for Anthony Dowell’s production of Swan Lake, Natalia Makarova’s production of La Bayadère and Michael Corder’s L’Invitation au voyage.

Sonnabend was born in Bulawayo, Zimbabwe, and studied at the Slade School of Fine Art 1955–60. Her work with MacMillan spanned more than 30 years, including such works as Rituals, Valley of Shadows, Requiem, My Brother, My Sisters and Playground. She has also worked regularly with Dowell, other collaborations including on his productions of The Nutcracker (Strasbourg) and Cinderella (Lisbon) and his Five Rückert Songs (Rambert Dance Company). Theatre credits included Camino Real and Antony and Cleopatra with the Royal Shakespeare Company.

Also a painter, she exhibited at the Whitechapel and Serpentine galleries, among others. Her works held by the National Portrait Gallery include portraits of MacMillan, Steven Berkoff and Stephen Hawking. She was an honorary fellow of University College London.

Yolanda Sonnabend: A look back at her work with The Royal Ballet 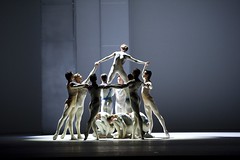 The designer and painter, who passed away on 9 November, was a key collaborator with Kenneth MacMillan, Director and Principal Choreographer of The Royal Ballet.