Will Tuckett’s work for The Royal Ballet includes the Olivier Award-winning The Wind in the Willows (the first ROH show to have a West End transfer), ‘Diana and Actaeon’ (Metamorphosis: Titian 2012), The Seven Deadly Sins, The Soldier’s Tale, Pinocchio, Sondheim’s Into the Woods, Faeries, The Thief of Baghdad and Pleasure’s Progress. He has created and directed many works, and choreographed for other companies, including Pinocchio (National Ballet of Canada) West Side Story (Sage, Gateshead), The Crane Maiden (Kanagawa Arts Theater, Japan), The Canterville Ghost (ENB) and works for Birmingham Royal Ballet, Rambert, Ballet Boyz, Dance Umbrella, National Ballet of China, American Ballet Theatre’s Studio Company, Ballet Black, Sarasota Ballet and Carlos Acosta. He has directed work for Opera North, Iford Arts and Garsington Opera Festival and choreographed for Opera North, The Royal Opera, Grange Park Opera and Bregenz Festival. He has directed and choreographed for the theatre, including productions at The Almeida Shakespeare’s Globe and the RSC, as well as for musicals and feature films. He has made several of his own films for the BBC and Channel 4 both as choreographer and director. He has collaborated with Zenaida Yanowsky on works for Whitechapel Gallery, Tate Modern and poetry company Live Canon. 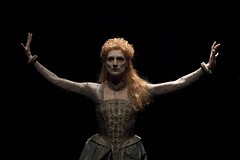 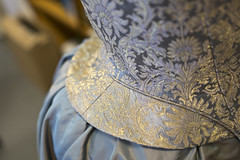 Head of Costume Fay Fullerton on the challenges of re-creating Elizabethan costumes for 21st-century ballet. 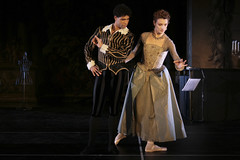 Zenaida Yanowsky, Will Tuckett and Nehemiah Kish in The Royal Ballet's Swan Lake

Damien Johnson as Orpheus in Orpheus

Will Tuckett and Kristen McNally in Don Quixote, The Royal Ballet