Shklyarov was born in Leningrad and graduated from the Vaganova Ballet Academy in 2003 (class of Vitaly Afanaskov). He joined the Mariinsky the same year, promoted to principal in 2011. He has toured internationally with the company. At the start of the 2016/17 season he joined Bavarian State Ballet as a principal, in addition to his position with the Mariinsky. His repertory includes leading roles in the classical, dramatic and contemporary repertories, including in ballets by Frederick Ashton, George Balanchine, August Bournonville, John Cranko, Michel Fokine, William Forsythe, Alexander Gorsky, Leonid Lavrovsky, Wayne McGregor, Benjamin Millepied, Angelin Preljocaj, Alexei Ratmansky, Jerome Robbins, Vasili Vainonen and Christopher Wheeldon. 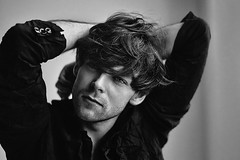 Changes to Principal casting have been announced.

Cast confirmation: Vladimir Shklyarov to dance in Marguerite and Armand on 5 and 10 June 2017

A cast change has been announced for upcoming performances of a mixed programme of works by Frederick Ashton.