Di Primo was born in Bronte, Sicily. He began his dance training aged seven at the Les Ballet School, Catania. He joined Vienna State Opera Ballet Academy aged 14 and on graduation won Best Student of the Year. Performances while a student included at the Vienna Opera Ball, on tour in China, Italy, Spain, Romania, Slovakia, Germany and Austria and in gala performances with the Slovak National Theatre, around Italy and in Youth America Grand Prix’s ‘Stars of Today Meet Stars of Tomorrow’. His awards include third prize at the 2014 Beijing International Ballet Competition, the Mary Day Artistry Award at the 2016 Youth America Grand Prix and his scholarship at the 2016 Prix de Lausanne.

Promotions and joiners at The Royal Ballet for 2016/17 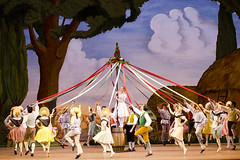 Promotions and joiners have been announced for The Royal Ballet's 2016/17 Season.