Italian composer Vincenzo Bellini (1801–35) was a leading opera composer of his era and a key proponent of the bel canto style.

Bellini was born into a musical family in Catania, Sicily, and wrote his first composition aged six. He first studied composition with his grandfather and then from 1819 at the Real Collegio di Musica, Naples. He wrote his first opera Adelson e Salvini for his graduation in 1825, and followed it quickly with Bianca e Fernando for the Teatro San Carlo. He first collaborated with librettist Felice Romani in 1827 on Il pirati for La Scala, Milan, and went on to work with Romani on all but one of his following operas. The immediate success of Il pirati not only in Milan but also in Naples and Vienna paved the way for his recognition as one of the leading composers of his generation, confirmed in the following opera La straniera. Zaire was a failure at its premiere in Parma but Bellini followed it with the success of I Capuleti e i Montecchi for La Fenice, Venice, recycling some of Zaire’s music. La sonnambula and Norma were further successes for La Scala, but the tempestuous gestation of Beatrice di Tenda in 1833 for La Fenice led to a rift with Romani. Bellini then travelled, returning home for the first time in six years and visiting London and Paris. For the latter’s Théâtre Italien he wrote his final opera, I puritani.

Bellini’s music was praised in his lifetime for its long, expressive melodies and sensitive word-setting, and his operas remain astonishing showcases of vocal virtuosity. 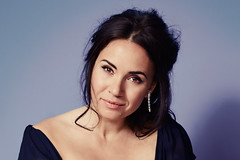 The singer will sign copies of her new album Paris, Mon amour after the matinee performance.