British conductor Tim Murray made his Royal Opera debut in 2013, conducting the UK stage premiere of Barry’s The Importance of Being Earnest in the Linbury Studio Theatre. Previous work in the Linbury Studio Theatre included conducting The Doctor’s Tale, The Enchanted Pig, The Gentle Giant and Will Tuckett’s The Wind in the Willows and Pinocchio for ROH2. In the 2013/14 Season he conducted The Wind in the Willows for The Royal Ballet in the Duchess Theatre and the world premieres of The Crackle (Royal Opera, Linbury Studio Theatre) and Wayne McGregor’s Tetractys – The Art of Fugue (Royal Ballet, main stage). He has since returned to conduct the world premiere of Out of the Ruins for the Life Reimagined Gala and The Invitation, Within the Golden Hour and Obsidian Tear for The Royal Ballet.

Murray is Associate Music Director of Cape Town Opera. He studied at the University of Cambridge, the Royal College of Music, the Tanglewood Music Center and with Oliver Knussen at the Britten-Pears School. He made his BBC Proms debut with the Birmingham Contemporary Music Group aged 21, and has since conducted such orchestras and ensembles as the Philharmonia Orchestra, Cape Philharmonic Orchestra, BBC Concert Orchestra, National Symphony Orchestra of Ireland, London Mozart Players, City of London Sinfonia and London Philharmonic Orchestra at Wembley Stadium, and works regularly with the BBC Singers. His opera credits include Mandela Trilogy (Cape Town Opera), Street Scene (Liceu, Barcelona, and Théâtre du Châtelet), Porgy and Bess (London Coliseum with Cape Town Opera and in Bordeaux), Fantastic Mr Fox (Opera Holland Park, UK premiere), Babur in London (The Opera Group), The Silent Twins (Almeida Opera), Don Giovanni and La bohème (Co-Opera Co.), The Magic Flute and Tobias and the Angel (English Touring Opera) and numerous productions with Tête à Tête, of which he was formerly Music Director.

Murray’s work in dance includes conducting the world premiere of Wayne McGregor’s UNDANCE (Sadler’s Wells). He is a regular guest conductor for Rambert.

Your reaction: The Importance of Being Earnest 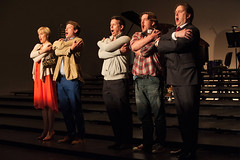 Conductor Tim Murray in rehearsals for The Importance of Being Earnest