British designer Tim Hatley made his Royal Ballet debut in 2013, creating the designs for Carlos Acosta’s production of Don Quixote, and has since returned to design Acosta’s Carmen.

Hatley’s many awards include Olivier Awards for Stanley and Humble Boy (National Theatre) and Private Lives (West End) and a Tony Award and Drama Desk Award for Private Lives (Broadway). 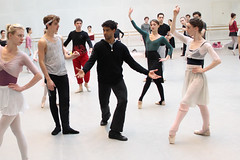