English composer, conductor and pianist Thomas Adès made his Royal Opera debut in 2004 conducting the world premiere of his second opera The Tempest. He has since returned to conduct The Rake’s Progress, a revival of The Tempest in 2007 and in 2017 his third opera, The Exterminating Angel, a co-commission between The Royal Opera, Salzburg Festival and the Metropolitan Opera, New York. His second opera, Powder her Face was performed at the Royal Opera House in 2008. In the 2019/20 Season he conducted Gerald Barry’s Alice’s Adventures Under Ground for The Royal Opera. For The Royal Ballet, he composed an original score for Wayne McGregor's The Dante Project.

Adès was born in London and studied at the Guildhall School of Music and Drama and King’s College, Cambridge. His first opera Powder her Face (1995) has been performed more than two hundred times worldwide. The Tempest has been seen in Strasbourg, Copenhagen, Sante Fe, Toronto, Frankfurt, Budapest, Lübeck and New York. The Metropolitan Opera’s recording of the opera with Deutsche Grammophon won the 2014 Grammy Award for Best Opera Recording. The Exterminating Angel won World Premiere of the Year at the 2017 International Opera Awards. His most performed orchestral work, Asyla, was commissioned by the City of Birmingham Symphony Orchestra under Simon Rattle. Other works include America (New York Philharmonic), Polaris (New World Symphony) and Totentanz (BBC Symphony Orchestra, BBC Proms). Much of his music has been choreographed for ballet. In 2019 his Concerto for Piano and Orchestra was given its world premiere by the Boston Symphony Orchestra and Kirill Gerstein.

Adès was Music Director of Birmingham Contemporary Music Group 1998–2000, Artistic Director of Aldeburgh Festival 1999–2008, and in September 2016 became Boston Symphony Orchestra’s first Artistic Partner. He regularly conducts orchestras such as the Los Angeles Philharmonic, London Symphony Orchestra and Royal Concertgebouw, and there have been many international festivals dedicated to his music. Appearances as a pianist include recitals at Carnegie Hall and the Barbican. His many awards include the 2015 Sonning Prize and the 2000 Grawemeyer Award. His original composition for The Royal Ballet's Dante Project earned him Outstanding Creative Contribution in the Critics' Circle National Dance Awards in 2022. He was appointed Artistic Partner of the Boston Symphony Orchestra through 2019, and made a CBE in the 2018 Queen’s Birthday Honours. He coaches piano and chamber music annually at the International Musicians Seminar, and gives regular piano recitals in Europe and the USA. 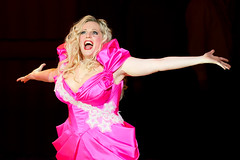 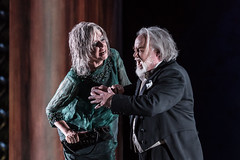 Thomas Adès in rehearsal for Alice’s Adventures Under Ground, The Royal Opera