Dubreuil was born in the Midlands and started dancing at the age of six, attending local dance classes before joining The Royal Ballet School as a Junior Associate. He went on to enter White Lodge, later graduating into the Upper School. Performances with The Royal Ballet while at the School included Fritz (The Nutcracker), peasant pas de deux (Giselle) and Dancing Master (The Rake’s Progress). Awards while a student include second prize in the 2011 Young British Dancer of the Year. His repertory with ENB included pas de cinq (Suite en blanc), pas de trois (Swan Lake) and roles in Raymonda Act III and Le Corsaire.

Since joining The Royal Ballet Dubreuil has danced Cavalier of Fairy of the Golden Vine (The Sleeping Beauty), pas de six (Giselle) and in Monotones II and Within the Golden Hour, in addition to dancing with the corps de ballet in such ballets as Romeo and Juliet, Jewels, The Nutcracker and The Dream. He has created roles for Kenta Kura in The Royal Ballet’s Draft Works and for Aakash Odedra for Deloitte Ignite Festival 2014, and in Hofesh Shechter’s Untouchable and Wayne McGregor’s Woolf Works on the main stage. 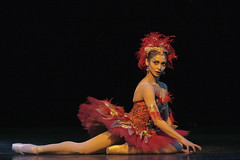 A number of Royal Ballet dancers are performing extracts from iconic dance works.

Téo Dubreuil and David Donnelly in Giselle, The Royal Ballet

Téo Dubreuil in rehearsal for The Nutcracker, The Royal Ballet